Hatoful Boyfriend Review – Date Pigeons Without Getting Crapped On

Want to roleplay as a the lone human girl in a city full of would be suitors? What if all those suitors were birds? No, I’m not talking about someone’s freaky weekend fantasy, I’m talking about Hatoful Boyfriend – the weirdest damn thing I’ve ever played.

Let’s get one thing straight – Hatoful Boyfriend isn’t really a game. There are no gameplay mechanics to learn or characters to control – your task is to make seemingly innocuous decisions and advance text. In short, this is a choose your own adventure visual novel. I played as Groovy Pete Tosaka – which was awkward when I learned I was a girl – the only human attending prestigious pigeon school St. Pigeonation’s. The story revolves around a semester of school, where you are presented a series of choices regarding which subjects to study, or who to eat lunch with.

These decisions drastically alter where the story goes – for example, one play through had me battling a pigeon biker gang, while another saw me following my dreams in search of the ultimate pudding. Seriously, the story takes so many weird turns I can’t help but wonder how they came up with the decision tree. Fortunately, a full play through takes less than 30 minutes, and subsequent plays allow you to skip dialogue you’ve already seen. In fact, this style of game could see great success on handhelds in the future, as a story could be easily completed during a commute. I have no idea how many endings are out there, but my testing seems to indicate that one altered decision triggers a different ending.

“The basic premise is completely insane, and gets more ridiculous the deeper you dive.”

Speaking of dialogue, it’s laced with bird puns (anybirdie, everybirdie) and is generally well written. I chuckled under my breath often, especially when references are made to other game series (Okosan used Wing Attack – it’s super effective!). Mundane aspects of teenage angst balance out the more absurd story beats, and you’d be hard pressed to predict a single outcome. Still, you’ll retread a lot of the same ground over and over, which discouraged me from wanting to bash through similar stories too many times. 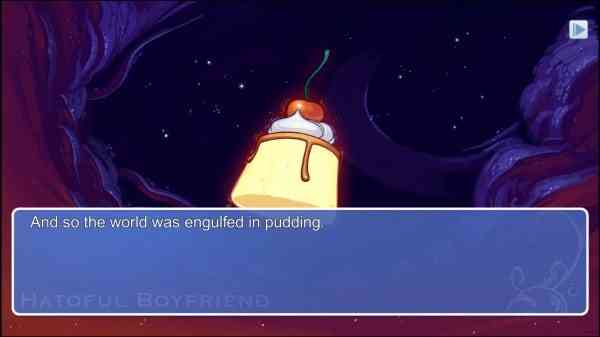 One thing I struggled with was distinguishing the characters. I mean, most of them are white pigeons, and look basically the same. Running across a parrot made me about as excited as one can get during this type of experience. Personality is expressed exclusively through text, as the game is devoid of animation or other visual flair.

Despite the generally witty dialogue, I couldn’t shake the feeling that the whole experience was just bizarre. Why is Groovy Pete trying to date talking birds? The basic premise is completely insane, and gets more ridiculous the deeper you dive. If you can swallow (heh, bird puns) the basic idea, there are a lot of weird and wonderful stories to be uncovered in Hatoful Boyfriend. Just don’t expect to do much actual playing.