Journey For Elysium Review – A Quick Tour Through The Afterlife

To pin down Journey For Elysium to a specific genre would be doing it a disservice. Despite being billed as a “story-driven VR game,” this experience is much more involved than others of its kind. There are the puzzles and exploration we have come to expect, but also a surprisingly heavy focus on adventure elements. One moment you are viewing echoes of an old memory, and in the next, you are scaling walls, Assassin’s Creed-style. Journey For Elysium doesn’t quite take any of its ideas as far as they deserve to go, but the effort to do something new is nonetheless worthy of commendation.

As a newly-deceased soul, you must cross the Underworld to reach Elysium where paradise awaits. Journey For Elysium pulls from Greek mythology, and this is evident in all facets of the world, from the environments to the puzzle design. To their credit, the developers have deftly avoided using Greek gods that have already been done to death in the mainstream. The cast here is comprised of characters most of us aren’t overly familiar with, creating room for the game to explore their origins.

For a story-driven game, the story is ironically the weakest link. The main culprit is the silent protagonist. It’s impossible to feel for his tragic past when he displays no emotion or personality of any kind. Stilted dialogue and voice-acting, in particular that of your guide through the Underworld, only further this disconnect. It’s a shame, because the story does pack some intriguing turns, especially towards the end when everything comes to ahead. 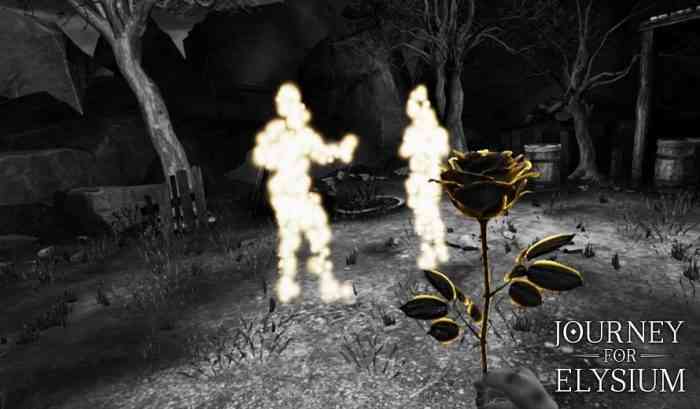 The puzzles never feel repetitive, but they also don’t grow much more complex beyond finding a few gold coins or flipping. What they lack in difficulty however, they make up for in user-friendliness. All clues and answers are always within your immediate vicinity. Interactive objects are highlighted in gold, creating a sharp contrast against the stark black-and-white visuals of the Underworld. This means that, should a puzzle stump you, you won’t have to waste time backtracking or combing over the environment in order to find the solution.

Journey For Elysium shines strongest when it evokes a sense of adventure. Much of the game takes places along the river Styx. Your main mode of transportation is by paddling a canoe, which feels notably natural in VR. The canoe behaves in as cumbersome a manner as you would expect a real canoe to, giving it palpable weight. Since traversal requires genuine physical effort, the result is a heightened sense of immersion.

The trek through the Underworld also sees you climbing plenty of walls, chains, and ladders. Platforming is not only used to get from one point to another, but is often integral to the puzzles themselves. The finale features a climbing segment that is especially exhilarating to play — it’s a missed opportunity that there aren’t more of these moments sprinkled throughout. Complimenting your climbing ability is the bow and arrows. Though there are no enemies to shoot at, only environmental targets, it remains rewarding to nail long range shots. Combined with the boat-rowing, these elements elevate Journey For Elysium above the common story-driven title. More often than not, it feels like you’re raiding mini dungeons in VR.

The problem is that all these ideas and mechanics are not utilized to their full extent. The story’s emotional beats miss the mark by a wide margin. Puzzles are too simplistic to leave a memorable impression. Boat-rowing disappears completely around the halfway mark. Journey For Elysium doesn’t hit its full stride until the final levels, and by then it feels too little too late.

Journey For Elysium is a competently designed VR title with the right ideas, if just slightly underbaked. Considering the entire experience clocks in at a brisk hour and a half, I can only wonder how much better it could’ve been if it slowed down and took the time to flesh things out. For a first-time effort from developers Mantis Games, though, Journey For Elysium is a great start.