If it wasn’t clear already, people love to be as comfortable as possible when gaming. Headphones can really push that experience one step further, but finding the right fit for your head is a bit of a gamble. One thing that is common between any headset is the sheer frustration that can arise from the tangled cords. You want a pair that works without any fuss or muss, and you want the quality to be great as well. Fortunately, Steelseries may just have you covered. Enter the Arctis 1 Wireless Headset.

Featuring a simply stylish matte finish, right off the bat I was impressed with these from a design standpoint. It may just be me, but I always appreciate a slick matte finish over a glossy one. Steelseries even goes a step further usually, opting to keep their logo understated. The headset’s easy to use as well, with all the controls being included on the headset itself. It can be a bit tough to get used to depending on if you are used to other means, like a controller built into the headset’s wiring or a separate peripheral, but it’s never cumbersome enough to turn me off of using the headset. Steelseries even went a step further by allowing for you to cast wire-free ambitions to the wind and returning to a wired setup if that’s more your thing with an included 3.5mm cable. It works well enough, but we’re not reviewing a wired headset, we’re focused on the wireless side of things in this case.

Steelseries clearly focused on form with the Arctis 1 Wireless headset, but that only goes so far. Thankfully, the headset’s even better from a functional standpoint, featuring a crisp sound quality and a painless process for pairing it up. I tested it across a variety of games, as well as other media, and across every platform, each song and game sounded excellent. Using the included dongle, you can plug it directly into your Nintendo Switch for immediate use. Otherwise, it’s as simple as connecting the USB to the dongle itself and then to an available port on your device of choice.

Pairing is quite simple too, with it both being initiated and completed in the span of about eight seconds. Sound quality is excellent overall, with VTOLs in Modern Warfare sounding suitably terrifying, or the sound of me fighting my way through a horde of enemies in Dead Cells. Directional audio is accurate too, and more often than not I was able to get a rough idea of where an enemy was coming from, allowing me to get the upper hand. I was a bit disappointed to see that the dongle doesn’t work too well with phone cases due to its small form factor. The headset’s mic also feels a bit off in quality, as I had been noted to sound a little tinny at times. Be it due to acoustics or the lack of foam to help dampen the sound on the microphone, I did find myself wishing there was something to help offset this as well. Overall I was told the quality coming from myself was pretty good as well though, despite this. 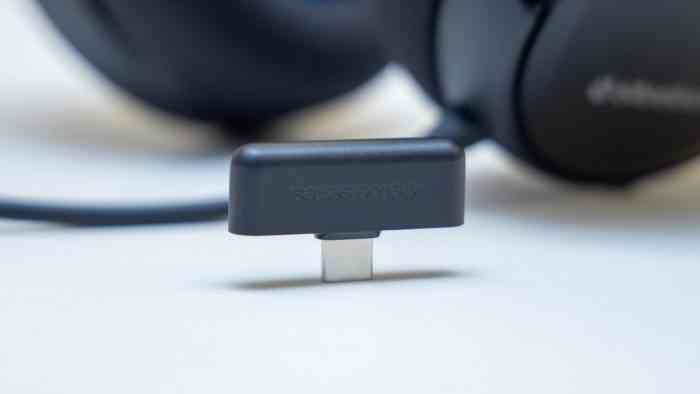 If I had one gripe, I’d say that the sound quality can only really be fully leveraged on the PC. The software you download for usage with the headphones includes a variety of pre-set equalizer settings that offer distinct options that focus on particular aspects, or on overall performance. This same feature is understandably not present on other platforms, but the quality is already so strong that it’s not a huge issue. The headset is also quite comfortable thanks to the large cups for each ear. Both between myself who has larger than average ears and my girlfriend who has stretched earlobes, we both found it extremely easy to wear and didn’t feel uncomfortable after extended sessions wearing it.

My major concern is that the Arctis 1 Wireless headset is fairly sturdy, almost alarmingly so as I felt I was going to break it if I moved it in a certain way. The headband feels quite sturdy though, and I wasn’t worried about breaking it at any point. It also sports some very strong battery life as well, allowing for lengthy gaming sessions or for unwinding with your favourite album. Steelseries claims up to 20 hours worth of battery life before needing a recharge, and while I can’t attest to running it down at any point, I also didn’t run it down at any point. After more than one time where I’d tried the headphones for hours on end, it still had plenty of charge to go, so you’re absolutely getting a pair of headphones that will work for a long time.

I’m admittedly shocked I was so surprised by how much I liked these headphones. They’re extremely comfortable, and the quality put my previous pair to shame. I think what I enjoyed the most though is that there was absolutely no hassle in getting them up and running. The dongle is extremely minimalistic, and it works like a dream. I had a pair that was in a similar price range that I was quite pleased with, but as of writing, I think I’ll continue using the Arctis 1 Wireless headset for a little while longer, you know, just for additional research.

***The headset was provided to COGconnected for review*** 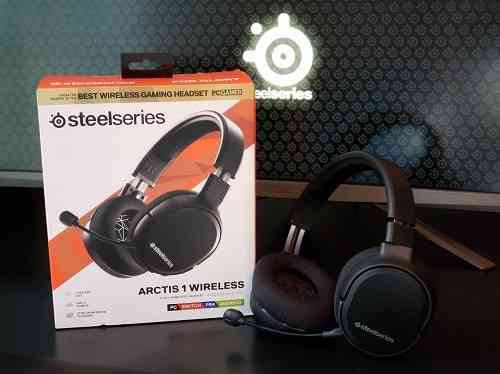