Lest you have any misapprehensions, I’ll start by stating that Islanders: Console Edition is not really a bite-size Civ game. Does that disappoint you? It shouldn’t, because it’s quite a good game in its own way. Its laid-back vibe, cute colorful visuals and open-ended gameplay make for an unassuming and friendly little game that might not be epic but is nevertheless full of charm.

In fact, I found, after some time playing, that it’s really a puzzle game, more akin to Tetris (believe it or not) or Sudoku than any 4X strategy series. Oh you’re building cities, for sure, laying down buildings and creating a sort of civilization. But there’s no diplomacy, no roads, no pop-up boxes telling you how angry your ungrateful citizens are.

Your goal in Islanders: Console Edition is much simpler, more chill than winning wars or getting to Alpha Centauri before your rivals. You’re trying to get as many points as possible, by placing buildings on procedurally generated islands. Depending on where you drop a structure — especially its proximity to other ones — your awarded points fluctuate.

By building up points, you unlock new types of structures, which in turn must be laid down in new ways. Eventually, you unlock a new island and you’re whisked away to start a new city. The end game? Well, there isn’t really one; Islanders: Console Edition is a sort of endless flow, with you trying to keep the vibe going as long as you can. 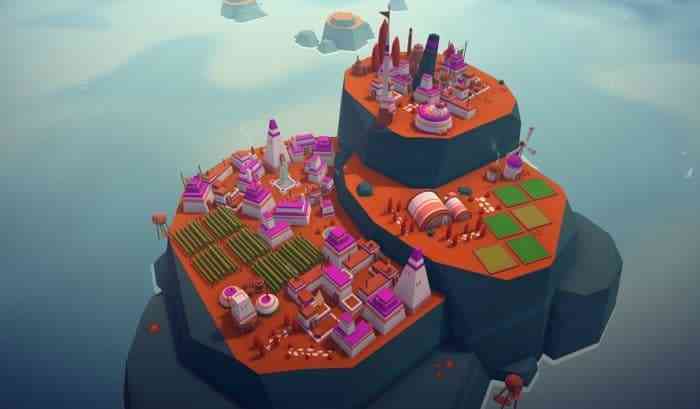 Again like Tetris, you’ll eventually fail to sustain your momentum, get too few points, and run out of new structures to build. Then it’s Game Over and — “poof” — your tiny little island paradise is gone, and it’s back to a rogue-like square one to start all over again. That didn’t feel as crushingly disappointing in Islanders: Console Edition as in some games I’ve played, because it felt like the journey was the fun, and never having any real “destination,” there was no sense I had lost anything.

And the visuals are beautiful. Their simple, low-poly vibe reminded me of Godus, and seemed to fit perfectly with the casual and relaxed style of gameplay Islanders: Console Edition offers. Looking at your island communities take shape is a pleasure for the eyes, and with no pressure on you as a “leader,” it’s ok if those eyes even glaze over once in a while.

Islanders: Console Edition is a feel-good, no-stress game. And I like that in lots of ways. Once in a while, when I did snap out of my happy trance, I will confess that longed for a bit more life in my tiny civilizations. All these buildings were cute but empty, sterile. They could well have been literal Tetris shapes instead of farms, breweries, and windmills, and it wouldn’t have mattered. Without any residents to create for, Islanders: Console Edition can feel lonely after a while.

And the controls are just okay. You use the various trigger and shoulder buttons to rotate the island and each building you’re placing, because after all your points depend on getting that perfect Tetris-like fit and maximizing the limited island space. Too often, though, I fought and fidgeted with the controls and the small Switch screen in handheld mode made that worse, irritating me more the more I played.

For best results, pick up Islanders: Console Edition for shorter sessions; calm yourself down and escape from the stress of life. Don’t look for it to satisfy your Napoleonic yearnings for military glory. And if you’ve been looking for the next “Civ-on-the-go,” keep looking. Islanders: Console Edition is a small game that knows what it is — and isn’t. And that’s just fine.

Cities lack life
Controls can be finicky
No end game