After 7 years in development, developer Joakim Sandberg has finally brought his beautifully developed game, Iconoclasts, to gamers everywhere. This game features gameplay and aesthetics reminiscent of the Super Nintendo classic, Super Metroid, with a deep story that revolves around themes such as government and religion. Despite it’s “indie” background, this is an incredibly polished game with a lengthy campaign. With Nintendo aiming to release 20-30 indie games each week, it’s my hope that Iconoclasts doesn’t get lost in the shuffle. It’s a must own game for the Nintendo Switch.

Iconoclasts centers around a 17-year-old girl, Robin, an unlicensed mechanic being hunted down by the government agency, One Concern. One Concern acts in accordance with Mother, the world’s religion. Along her journey, Robin will encounter all sorts of different people from different regions. Some of these characters will team up with Robin while others will oppose her to the death. The story does a solid job of conveying the problems when a government is heavily influenced by religion. Oh yeah, and the moon is slowly exploding and the planet is dying. Needless to say, our hero Robin will have her work cut out for her!

As noted earlier, this game features gameplay reminiscent of the Super Nintendo classic, Super Metroid. You’ll start the game with just your blaster and then, within a short period of time, your massive wrench. These two items will be your primary tools throughout the campaign – but both will evolve as the game progresses. Your wrench will be used to twist various nuts placed throughout the game, opening doors, moving platforms, etc. Eventually, your wrench will gain additional abilities and you’ll earn new firearms to alternate with your standard blaster (such as a grenade launcher). The firearms and the wrench can both be “charged”. Charging the wrench causes it to spin, which can deflect certain enemy attacks. Charging the firearm will create a more powerful shot (think Mega Man’s charge shot) but there is a re-charge time afterward where you can’t fire your firearm at all – so if you miss your charged shot, you’ll need to wait a few seconds until you can fire again. Breaking the game down to its base, you’ll travel from region to region, solving platforming puzzles, killing enemies (including boss fights), and speaking with a whole slew of characters to progress the story. As your weapons gain new abilities, you’ll backtrack to previous locations to access new areas – including secret areas. One more feature worth noting is the “tweak” system, which allows you to add up to three “tweaks” to your character. These tweaks do things like increasing your health, strengthen your offense, help you breathe underwater longer, etc. It’s just another way the game adds depth to the gameplay to help it stay fresh. 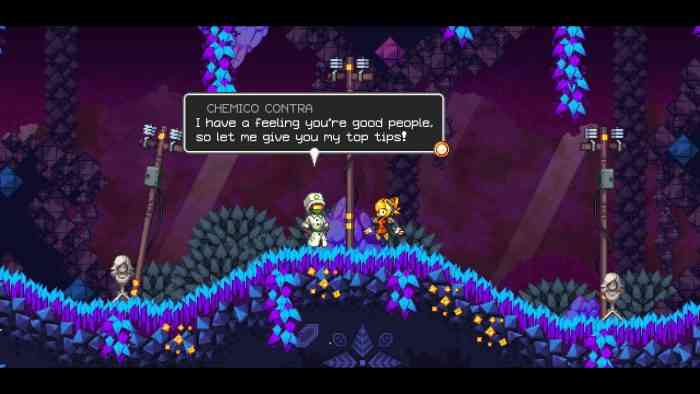 The story is conveyed mostly through conversations with the various characters in the world. Robin doesn’t actually speak – save for a few emoji like expressions, but almost everyone else does. Some of the conversations can be a bit dull – there’s a lot of backstory in the game regarding the religion, the government, and the dying planet. If you’re not too interested in the story, you could probably skip most of it, and still have a general idea of what’s going on while playing a satisfying platformer. However, if you take the time to go through all the conversations, you’ll definitely find yourself creating a connection between the characters – in this respect, it’s much like some of the best RPGs. You’ll learn all about the enemies, their motives, their flaws – you might even empathize with some of them. The characters aren’t voiced – everything is text – but the way the tone is conveyed by using certain sound effects, animated text, and expressions on the characters, you really understand what the character is feeling. This is not an easy task, and the developer deserves props for being able to convey conversation so well.

Visually, the game utilizes that ever-popular, pixel aesthetic, that will bring back fond Super Nintendo memories. However, despite this retro look, the characters are very well animated. During conversations, you’ll get plenty of expression through the characters faces, hand gestures, etc. The backgrounds are beautiful, hand-drawn and multilayered vistas creating the illusion of a vast world. Boss fights are usually massive robot-type creatures that take up a good chunk of the screen. While it’s true that this nostalgic look is getting a bit over-used, its use in Iconoclasts is quite good. Since all the conversations are text-based, the only audio in the game is the background music and the sound effects. The sound effects work, but there’s nothing special here. The background music is not as good as some recent soundtracks, like the amazing Child of Light soundtrack, but it’s still pretty solid. 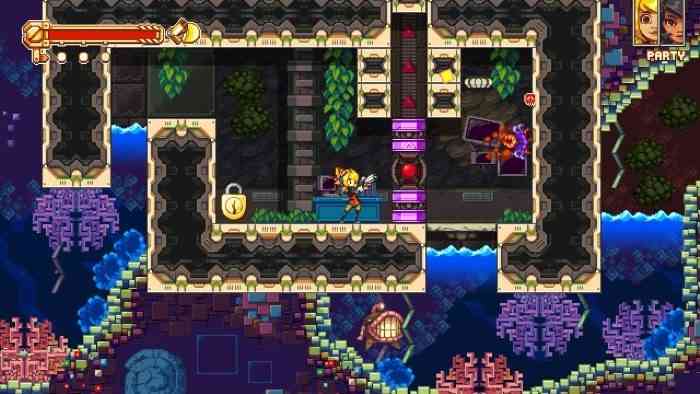 Iconoclasts is an excellent game. The visuals and audio work well, the story is deep, the characters are well developed, and there’s a nice dose of humor thrown into the mix. The gameplay is fun, side-scrolling action with some back-tracking elements akin to games like Super Metroid. You’ll easily get 12+ hours of gameplay out of this title. The game features three difficulty modes, perfect for any gamer. The easiest “relaxed” mode makes you almost invulnerable – perfect for gamers who just want to enjoy the story. Then there is the normal mode that most people will pick and a hard mode for those that crave the challenge. And for those who care, the game features five different save slots attached to your profile – handy if you want multiple saves or have more than one person using the same profile. The Nintendo Switch is becoming a treasure trove of excellent indie games and Iconoclasts is a jewel that shines as bright as some of the absolute best. Like some of the best RPGs with deep character development, this is the type of game that will sit with you for days and weeks after you’ve finished it.