Since the release of the original Pong back in 1972, gaming has evolved and changed in many ways. We move in a 3D space more often than not, some games are in full VR and most games implement mechanics and systems from multiple genres to appeal to more people. Hypergalactic Psychic Table Tennis 3000 is the next evolution of Pong, implementing RPG mechanics and conversation systems and adding the ability to move across the tennis court horizontally as well as vertically. This is the next step for Pong veterans and anyone who played the original should definitely check this table tennis title out.

After being victorious in a match of Hypergalactic Psychic Table Tennis 3000, I’m initially given the choice between two upgrades for my Pong paddle. This can include new abilities such as fireball, Hydrotraverse, Chrono Crank and more skills that change the game drastically. One skill fires multiple arrows that not only direct the ball towards your enemy, but will continue to push it in that direction even after your opponent has hit it. One ability increases the size of your Pong paddle to be roughly the height of the court, preventing anyone from getting a ball beyond you. Each skill brings new strategy to the table tennis court and the developers at Blue Wizard Digital have created a fun and strategic experience that anyone can pick up and play.

Some enemies that you’ll take on in Hypergalactic Psychic Table Tennis 3000 are quite imposing. The Hydra is a block with multiple Pong paddles stemming from the body. The Dark Elf on the Shelf is a deceptively fast and tiny paddle that zooms across the battlefield in a way that most humans couldn’t. The most intense battles were with Giant Baby Paddle and Beast Paddle which take up a majority of the opposite side of the court and are quite girthy to boot. The girth of an enemy increases their ability to deflect a ball that otherwise would’ve passed the paddle, while some enemies have the fireball skill and even a heal. The amount of customization put into each enemy paddle is comparable to the one I built and each one feels unique.

Not only does Hypergalactic Psychic Table Tennis 3000 give me the ability to increase my size, girth and speed while gaining access to new abilities, it also includes health and mana bars. Managing your health and mana while knocking the opponent’s health down one smash at a time adds more strategy to the game. While it’s possible to explode the enemy Pong paddles, they’ll only be gone until you score a point or get scored on, so make it count! 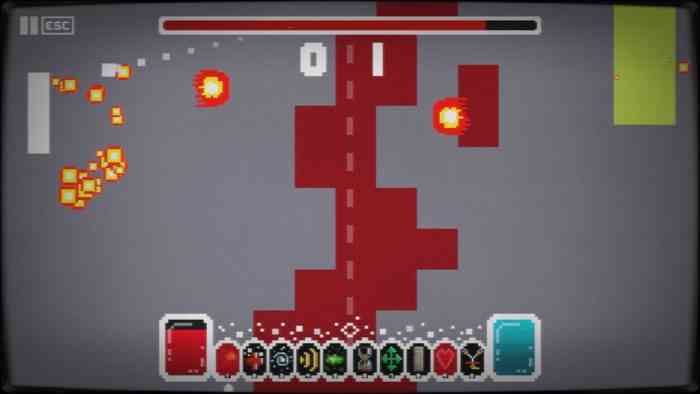 Some battlefields include environmental effects that are illustrated with red (lava), green (slime) and blue (water), which all interact with abilities I unlock along the way. While a frozen ball will melt and become a standard ball when it hits the red lava, the fireball will sizzle into a cloud of a steam once it touches the blue water. The most challenging addition to the Pong battlefield is portals that can be used to confuse your opponent and have even been used to throw me through a loop as well. Once the ball is going really fast and it goes through one portal but not the other, or it goes through both twice in a row, it becomes difficult to keep track of the four pixels that represent the ball.

Similar to characters like the Hydra, there are some based on real people such as Jen Soska and her sisters, Lady Gaga and Al Alcorn himself. Al Alcorn is the original creator of Pong and it’s a playful and fun nod to include him in the game. Other fun opponents include Rabbid Teen Wolf, An Ex Lover and Wight Boy. While some of these enemies have generic dialogue, many of them have hilarious quips and sarcastic comments. My only complaint with the enemies I’ve encountered is I’ve seen many of them multiple times. There’s a dialogue system that allows me to romance the enemy paddle if I have the appropriate level of charisma and answer the questions properly, similar to Fallout or Elder Scrolls from the infamous Bethesda studios.

This game doesn’t take itself seriously but the amount of fun and laughs it has given me over the several hours of gameplay, I have to say that it’s one of the best pick up and play experiences I’ve had in recent years, despite the minimal visuals. It’s easy to learn but difficult to master, similar to the original Pong, but Hypergalactic Psychic Table Tennis 3000 brings far more to the table than any other Table Tennis experience that’s out today. HPTT3000 is a small download and a very noticeably indy game but what’s here is very entertaining and as I play through the hundreds of levels, I keep thinking that I wish this game was a thing when I was goofing off in high school computer class. When I’m looking to wind down after playing a more intense game such as Apex Legends or Horizon Zero Dawn, Hypergalactic Psychic Table Tennis 3000 has been relaxing arcady fun that reliably puts a smile on my face.

Blizzard Reveals More Information on Diablo II: Resurrected
Next Murder by Numbers Review – A Pixel Puzzle Mystery
Previous The Suicide of Rachel Foster Review – What Could Have Been