Hotline Miami took the industry by storm when it first dropped back in 2012. A few years later, we’re graced with its sequel, and even after that, we have what is the definitive offering. Packing two insanely tough, but immensely satisfying games into one package, the Hotline Miami Collection is arguably the way to experience the cult hit. While it’s been a while since we strapped into Jacket’s Acado GT, or stepped back into The Fans club, so why not read on to see if the Hotline Miami Collection still hold ups? (Spoiler: They still rock).

Do you like hurting other people? The dastardly duo from Dennaton Games pose the question to you pretty much right off the bat. Playing as the silent protagonist Jacket, Hotline Miami has you storming all sorts of seedy locations under the guise of “house calls” or “VIP events”, and despite the seemingly loaded question, the Hotline Miami Collection has you laying the hurt in a multitude of ways. Firearms, drills, beer bottles, or even just a couple of knuckle sandwiches, you have a lot to work with. Do you use that shotgun to clear a room quickly while risking your neck in the process? Do you opt to go silent swinging a katana around Pulp Fiction style? It’s totally your call, and much like in 2012, it still gives you that rush once you manage to wipe out a floor in one go. The Hotline Miami Collection hasn’t skipped a single beat when it comes to its hard-hitting gameplay. The port is also excellent, with load times being relatively brief. I did run into the odd crash during my time with the game, along with the occasional cue-ball spawning outside of a building, but in all, its a pretty faithful port that lets you jump right back into things when you die, of which you’ll be doing plenty of.

We also have the pleasure of getting our hands on the sequel, Hotline Miami 2: Wrong Number. It’s an excellent sequel, featuring a bigger storyline and more diverse characters, while still delivering that bone-crunching combat that people loved about the first one. It’s just as fast, and just as satisfying, until you hit one of the open-ended levels. Arguably, they encourage a more cautious approach, but I feel like this goes directly against what Hotline Miami 2’s predecessor was is all about. There are still plenty of tight corridors and rooms to dart in between in the sequel, but the occasional open area, be it in a waterfront warehouse or back in Vietnam in one of the flashback levels really take the momentum out your sails and can be frustrating to progress through. Fortunately, they don’t make up enough of the game to take away from the experience, but its still a common enough complaint that it makes Wrong Number less of a thrill overall than Hotline Miami 1 is as a whole. 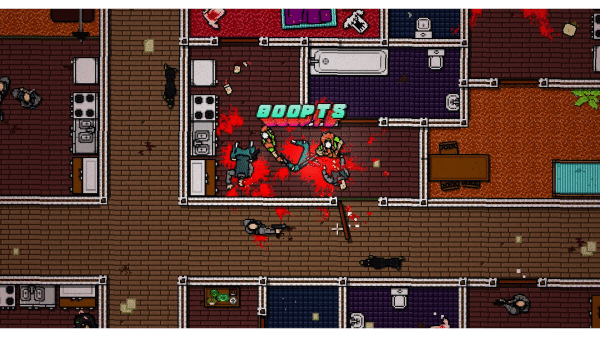 Despite that major issue, Hotline Miami 2 is absolutely a bigger, bolder sequel and for the most part, it sticks the landing as well as it did before. Each character presents a different approach to playing a level, with one of my favourite approaches still remains playing as Evan, the journalist who seeks to get to the bottom of the mysterious 50 Blessings organization. Instead of smashing heads and slashing throats, he takes the pacifist aproach, at least until he gets pushed into a homicidal rage. The screen distorts, and stylistically, its pretty cool. There’s also a nice bit of variety in The Fans, a group of copycat killers that are restricted to a specific mask, each giving a different playstyle, be it fists, dual-wielding submachine guns, or running around as twins who wield a chainsaw and whatever else they can get their hands on. The sequel is as wildly creative as the first game, with it culminating in a truly “What the f***” moment of an ending.

Another aspect that stood out with the games initial release and its sequel was the music. The soundtrack in the Hotline Miami Collection slaps harder than one of your weapons meeting a mobster’s face. The high energy synthwave tunes captures the aesthetic perfectly, featuring big names like Carpenter Brut, Perturbator and Mega Drive all some pretty big names in their respective genres. Each level is a blend of solemn, droning white-noise and high energy tracks that make you want to go kick some ass. You feel great at first, but did you feel good hurting all those people? Hotline Miami is unashamedly brutal, but its music helps you zone in until you get that floor just right, that the rush is worth pursuing in each and every level. Frankly, I didn’t really dwell too much on their ominous question, but the blend of simplistic visuals and surprisingly intense violence can’t be understated. It feels deliberate, much like you would pacing down the corridors of a mobster filled crime-den, ready to bring the pain.

One notable absence is the Level Editor. After release, Hotline Miami 2 gave players the means to create their own gauntlets, and the fanbase made some pretty excellent stuff overall. It’s a shame that you don’t get the ability to do this on the console versions of the game, but it would have been nice if Devolver could have provided a batch of curated levels, with Dennaton’s blessings, that fit the themes of the game, or something to that effect. It’s hardly a detriment in the grand scheme of things, but those who got to experience it will be left wanting for sure. 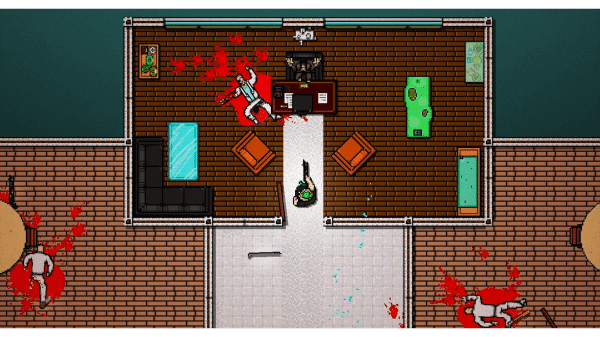 My personal major gripe with the game lies in the control scheme. Having played through both of the games on PC, re-learning things was rough at first, but once I got the hang of things, it started to click just like it did before. That simple, yet nuanced approach makes for a game that’s easy to get into, but truly rewarding to master. The console controls do support being re-mapped, so it’s worth toying around to find something that clicks for you, but for the most part, it works well enough.

Despite the odd control or technical issue, this is still an excellent means of experiencing the cult hits of this series. it’s technically sound, has a killer soundtrack, and features every bit of content minus one notable omission, allowing you to take calls from 50 Blessings and knock a few heads (to say the least.) on the go. The Hotline Miami Collection provides one excellent game and one very good game, and between unlocking all of the weapons, masks, and finding the secrets that hide beneath its blood soaked, neon exterior, you’ll be coming back at least a few times to try and master it all. 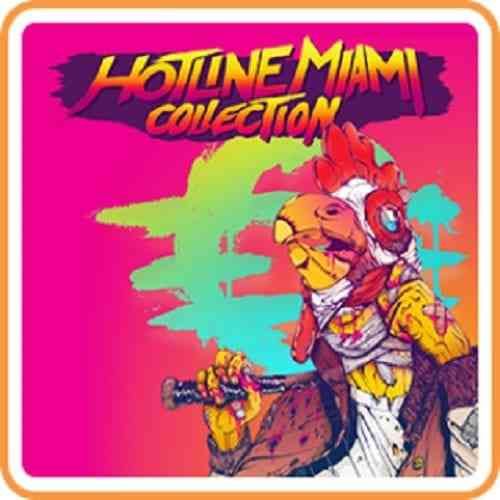