When Hotline Miami appeared on the scene in 2012, I was floored. It was brutal, fast-paced, and most importantly, fun. Containing a level of violence and brutality on par with Manhunt, players were instructed by eerie phone calls to go to locations and murder everyone inside. Kill everyone faster and with more variety earned you a higher score. Slip up once and you’re dead. With a storyline almost as confusing as Mullholland Drive to boot, a new cult classic was born.

Hotline Miami 2: Wrong Number, comes back bigger and better than ever. New weapons, new soundtrack, new masks, everything has been ramped up by Dennaton Games to deliver a solid sequel that promises to wrap up the sadistic tale of its predecessor. This time however, the story is told from a lot of different perspectives that really allowed the developers to play with how the game works against you. It’s clear that a lot of work has gone into rethinking the original design, and I’m happy with the result.

While there are a lot of new characters with interesting playstyles, I’d like to highlight Alex and Ash, and Evan. The first two are actually both controlled at the same time, with one wielding a chainsaw and the other a pistol. Left-click is swing chainsaw, and right-click is shoot. It was a very interesting dynamic that feels fluid once you get the hang of it, but has some small hiccups. First of all, the animation isn’t quite right. You’ll notice the mask with the handgun sometimes lags behind and then teleports to catch up. This kind of throws you off your game, and I ended up generally using the pistol as a way to lure guards towards the chainsaw. It’s also difficult to aim sometimes, as you’re in direct movement control of the swan with he chainsaw.

Evan is a totally different story. He’s basically a writer trying to finish a book about the the crime spress, and he’s generally not out for blood. If you avoid executing downed enemies, he won’t ever kill anyone and actually empties bullets when picking up a gun. Doing so can increase your combo, and it’s a lot of fun trying to move from room to room using only melee and then swapping out dropped firearms to make them useless and increase your score. Now, if you do happen to execute enemies, Evan goes into a sort of rage mode where being nice flies out the window. I thought it was a pretty cool change of pace, so I actually tried to clear all of his levels without raging.

The biggest change to the series I noticed was the level design. While the classic room-clearing stages are still present, more variety has been introduced. Players are almost forced to get into epic firefights at times, across vast stages. I’ve gone from hitting shift to look around once in a while, to basically playing the game with it held down to make sure I always have much better situational awareness. If you’re not playing carefully, you’ll be killed from off-screen much more frequently now due to an increase in windows and open areas. While I was initially frustrated, tackling these challenges felt incredibly satisfying and forced me to think outside the box. It’s a tough game, and I was stuck on a few levels for upwards of thirty minutes multiple times. 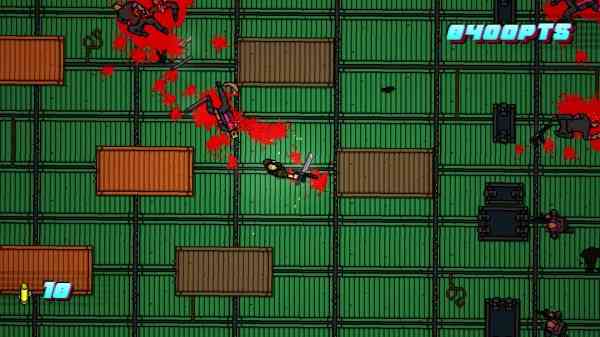 I’m glad they’ve increased the difficulty a bit, but some problems with the AI are still present. They’re easily tricked into following you around corners, and the general mentality is still swarm the masked villain until he’s dead. While this makes for some incredible bloodbaths, these henchmen need to get smarter. With more of an emphasis on gunplay, firearms are all over the place. This means losing a bullet or two is no big deal, so you can simply fire a round off to herd enemies into choke points like doors and corners. I abused this whenever necessary, and I think it just detracts from what the game is supposed to be about. There are still tons of great moments where you can move swiftly from room to room and rack up a nice combo, but the distraction strategy remained king for finishing stages with ease.

Speaking of which, there are a lot. Not only does Wrong Number have more stages, but they feel longer too. There were a few times where I had to simply leave the game running because I was stuck on the third or fourth zone of a stage and didn’t have time to finish. Overall there’s a lot more content this time. I’ve noticed general improvements too, such as rolling heads or other parts of the environment you can interact with a bit. The world just feels a tad more alive this time around and that’s always a good thing.

Another great aspect that’s only been improved upon is the soundtrack. That steady ’80s electronica is back, with a lot of mellower songs for story sequences as well. The composers really outdid themselves this time and I’ll be sure to pick up OST in the near future. Music can make or break a game, lending a hand to really immerse the player into the world at hand. Hotline Miami is one of those games that just wouldn’t be the same without its music and I’m glad they went all out during production of the sequel.

It’s a clear choice when deciding if you should pick up Hotline Miami 2: Wrong Number. If you liked the first game or just want something with some over-the-top violence, this is definitely worth a purchase. A story David Lynch would be proud of, great music, and twitch-action gameplay are even more reasons to pick this up and give it a shot. It’s not for the faint of heart, but if you can handle the extremely mature content then by all means, enjoy tackling this wild ride. I’m sure it’ll grab a hold of you and only let go long enough to bash your head in with a wooden bat.