OlliOlli2 is a sequel to last year’s indie hit OlliOlli, a side-scrolling skateboarding game that impressed a lot of people with its simple-yet-addictive gameplay.  OlliOlli2 builds on the strengths of its predecessor, delivering another smooth, polished experience that packs a surprising amount of fun into a tiny package.  You will get pulled in by its relaxed and fun vibe – but beware, you will also eventually hit a wall of frustration as it ramps-up the difficulty to near inhuman levels later on.

Having not played the original title, and not being a veteran of skateboarding titles, I came to OlliOlli2 with an open mind.  I was impressed right away with the game’s fresh visual style – at first glance, one might be tempted to call it a 16-bit retro style, but it is not quite that easy to categorize.  There is an artistic stylishness to the look of the game that, for me, hearkened back to the even earlier days of Atari and Intellivision (I guess I am dating myself there), rather than the SNES.  Lots of color abounds here, using a gorgeous, full chromatic palette, making this game as easy on the eyes as a California sunset – it is a fitting motif, then, for a game that uses the sunny climes and palm trees of Hollywood as its inspiration.  You never get tired of looking at this game, as it moves you through various “Hollywood movie sets,” such as the futuristic sci-fi scene, or the cowboy-movie lot – then, every time you finish a level successfully, you roll up to “paparazzi” who scramble to take your picture.  This game is lighthearted and inviting, and there is a nice sense of fun at all times.

Adding to the fun and pleasant feel of OlliOlli2 is the very cool music.  Catchy without being overpowering, it compliments the visuals and the vibe of the gameplay perfectly.  Its electronic and atmospheric style also has a retro kind of thing going for it, as I was reminded of the Sega Genesis version of Sonic the Hedgehog as I listened to it – and that is a good thing. 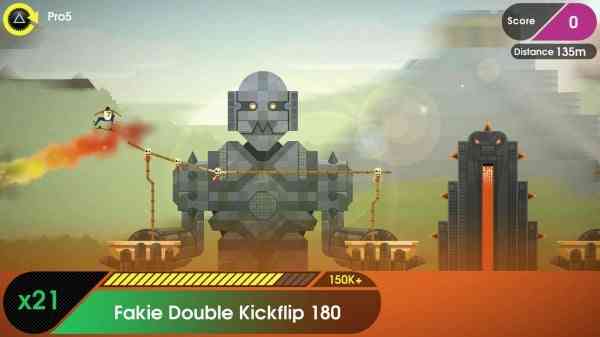 “Lots of color abounds here, using a gorgeous, full chromatic palette, making this game as easy on the eyes as a California sunset.”

But in a game such as this, it is all about the gameplay.  When you are playing any kind of sports game, you need the controls to be spot-on, intuitive, and smooth.  In OlliOlli2, they indeed are. You use the left stick to jump and pull down but you must do this in tandem with the X button, which you use to land, and the Left and Right buttons, which make you rotate.  Executing all of these in a series results in tricks.  It sounds pretty simple, right?  The thing is though, you must do all of these things, in perfect precision, while flying through a 2D side-scrolling obstacle course.  And, one thing that drove me nuts early-on was the fact that you also need to periodically push forward as well, to maintain your speed.  You are doing so many things at once in this game; OlliOlli2 has a learning-curve that bends sharply up the vertical axis, so bring your A-game to this one, amigos.

You do eventually get the hang of movement.  I was grinding and jumping well enough to feel confident after taking the time to learn the moves – and to be fair, the moves are hard but they can be learned.  Like all great control-schemes, this one is straightforward but demands your full attention to master.  For example, it took me many tries – and face-scraping wipeouts – to get it into my thick skull that I needed to simply let the left stick go gently to jump up, rather than pulling up with my thumb like a Neanderthal.  In this game, you have to be quick, accurate, and meticulous with your moves and tricks, and all this while going at a very fast speed – another way that OlliOlli2 reminds me of the original Sonic, or even the more recent Flappy Bird.  One false move, and you wipe out – and trust me, that hurts almost as much as actual road-rash, because it means you have to start the entire level over. 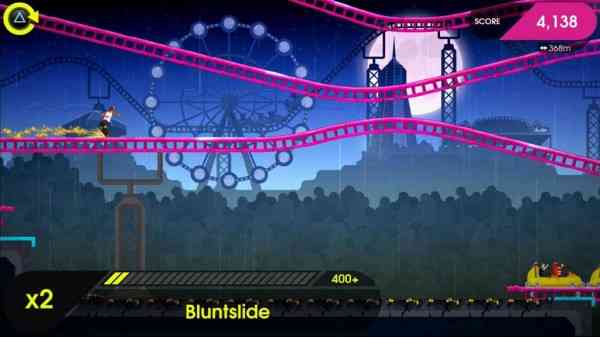 “You are doing so many things at once in this game, OlliOlli2 has a learning-curve that bends sharply up the vertical axis, so bring your A-game to this one, amigos.”

And you will indeed wipe out many, many times – you take that for granted when you come to a game like OlliOlli2.  And that could – for someone like me with zero patience and the attention-span of a fruit-fly – be a real problem.  But I have to say, I never got tired of re-playing levels in this game, because the experience was always so damn fun.  And, I also knew that the problem was me, not the controls.  I knew I just needed to press X a millisecond sooner, or flick my thumb ever-so-slightly to the left as it pulled up.  But knowing it and doing it are two different things – something I was reminded of many times in OlliOlli2.

It was also a real Pavlovian rush to finally execute all of your moves properly, and get the unlock to the next level as a reward (and the pleasant release of endorphins to your brain that comes with it … ahhhh).  The game sucks you in skillfully, as you breeze through the first few levels, only to encounter more and more difficulty.  Oh, I will admit, there were indeed times where I threw down my controller and cursed the makers of this evil game to burn in hell-fire – but I always had to go back, I had to try to get it right.  OlliOlli2 has a perfect balance of challenge with an “I’m so close to getting it” addictiveness. 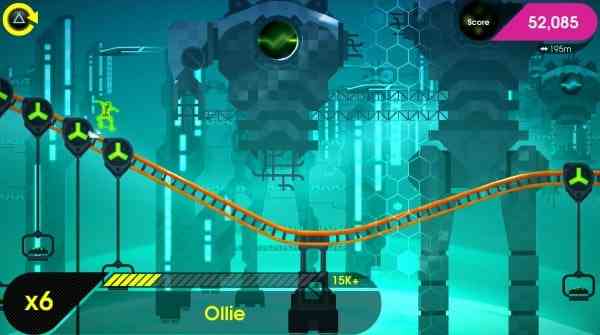 “There were points where I was just hanging on by a thread to survive a level – how on Earth these sadistic bastards expected me to pull complex tricks on top of that, I have no idea.”

But holy crap, it does get, as our Boston friends would say, “wicked-hard” at times.  There are 50 levels, of which the first 25 are termed “Amateur,” and the next 25 are “Pro.”  This implies that even a total spaz (like myself) should be able to do the first 25 – hey they’re Amateur, right?  But I’m sorry, I found even these levels got insanely-challenging pretty quickly. I won’t say how far I got out of embarrassment, but I will say that there were points where I was just hanging on by a thread to survive a level – how on Earth these sadistic bastards expected me to pull complex tricks on top of that, I have no idea.  And there is apparently a “Rad” mode that you can unlock that is even harder – Good God, Roll7, have you no sense of decency?!

Would a game like this ultimately steal months of my life, like some bigger titles?  No.  But it is super fun to play as the casual – yet deep – game that it is.  I played on the PS4 for this review, but I think a game like this is a perfect hand-held experience – one that you can pick-up and play for a while, walk away from when you hit a frustrating level, and come back to when you have had time to cool down (and pick up the table-lamp you just threw onto the floor).  This game has replay value written all over it; you may get angry, you may put it down at times, but you will keep coming back again and again.  My only quibble is, as I have alluded to, that it eventually just gets too damn hard to continue, unless you have somehow found a way to SLOW DOWN TIME ITSELF (sorry, rage returned briefly, I’m good now).