“Ok campers, rise and shine! — and don’t forget your booties ’cause it’s cold out there today…” In 1993, I saw a little Bill Murray movie about a man who repeats one day over and over, and it instantly became one of my favorite films. So the news of a sequel to Groundhog Day was a welcome, if surprising, development even if I had to wait over 25 years for it. And the fact that Groundhog Day: Like Father Like Son is a video game – and a VR one at that – sounded even better. It hurts to say, however, that I came away disappointed after a playthrough. It’s not a terrible game, but it could have been so much better. A great premise and iconic source material are let down by Groundhog Day: Like Father Like Son’s clumsy execution and sloppy production values.

Groundhog Day: Like Father Like Son has you play the son of Phil Connors (the hero of the film) as he reluctantly returns to his childhood home of Punxsutawney, Pennsylvania. Phil Jr. is a cynical jerk, just like his father was before his transformation, and just like his father, he’s doomed to repeat the same day until he learns some important lessons – in his case, the value of family, friends and making amends for the past. In gameplay terms, that means that each “day” for Phil Jr. is broken into a series of discreet scenes, in which you must say and do the right things, including play minigames and solve puzzles, correctly in order to progress and allow Phil Jr. to break free of his own time-loop. If you fail, you have to go back and replay the scene and get it right.

Watch Out for that First Step. It’s a Doozy!

That isn’t as tedious as it might sound, though. Each time you replay a scene, you bring more and more knowledge of what the correct order of operations is and so even the replays will vary as the characters will react differently to you and the narrative will play out more fully each time. Just like Phil Connors got a kick out of knowing and anticipating everything with each repeat in the original movie, you’ll enjoy the power rush of learning to do every scene perfectly and moving on in the game’s story.

I loved the idea behind Groundhog Day: Like Father Like Son, and it was a nostalgic treat to revisit Punxsutawney, and see how those quirky characters had fared after 25-plus years. Old Needlenose Ned is back, as is Rita (no Larry the cameraman though, sorry), and the town is laid out just like you remember in the film. The story that slowly comes out in the game is an interesting one as well, as you learn how young Phil Jr. grew to resent his father who seemed to spend more time caring about everyone else in Punxsutawney except his son. 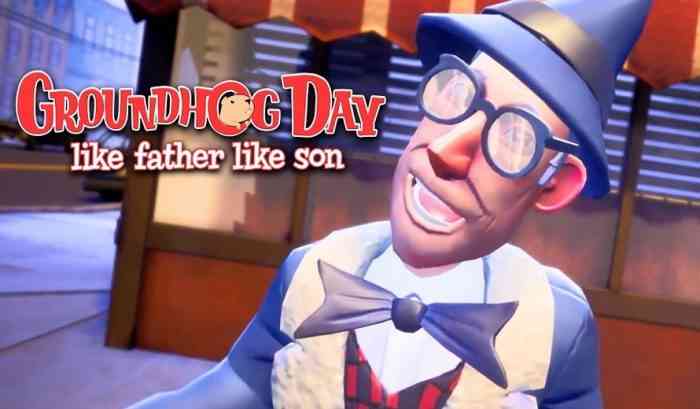 It’s also cool that the narrative branches according to your dialogue choices, much like a Telltale game does. In fact, I found Groundhog Day: Like Father Like Son to be very reminiscent of older Telltale titles, especially their Back to the Future game from 2010. The basis on a classic movie, the focus around a single small town – even an eerily-similar back-alley spray painting scene — all make this game feel almost like an homage to that particular game as much as the Groundhog Day movie. All of that is great; the problem is that Groundhog Day: Like Father Like Son’s clumsy mechanics and generally unfinished feel often dampened the fun.

Firstly, there’s the control mechanics. Groundhog Day: Like Father Like Son being a VR game, you grab and manipulate objects using a pair of disembodied hands – a common VR method. Squeezing on the Move Controller’s trigger closes your hand, but in Groundhog Day: Like Father Like Son the detection system is very finicky and imprecise, so I found that I often grabbed the wrong item. This could sometimes make puzzles very frustrating as I needlessly fiddled for the right angle to grab, or I went very slowly to make sure I had just the item I intended. In general, I found the control of the disembodied hands to be very wonky and even glitchy at times, which made minigames and puzzle challenges very tedious.

And in a strange choice, the developers have also decided to make the dialogue system follow the same grabbing mechanic – you grab your “answer” to a statement or question by physically reaching out and squeezing a bubble floating in front of you. But again, the choices have been placed so close together that I sometimes picked the wrong one by mistake. That is a crucial shortcoming, because that wrong answer might have changed the narrative for me later in ways that I wouldn’t be aware of.

Physics and production values, in general, did not feel very polished in Groundhog Day: Like Father Like Son. Making breakfast in one scene, the strips of bacon sat upright on their sides in a weird way rather than laying flat in the pan. Throwing an object, which is required at times, was always frustrating because the trigger-release action on the Move caused the object to veer off sideways rather than straight ahead. I wasn’t a fan of the art style and look, either. Characters looked crude and at times even a bit grotesque, with unnatural robotic movements that took me out of the immersion often — for example, they often didn’t look at the person they were talking to, but just stared in a random direction, or at me, with dead eyes. Overall, I was disappointed that Groundhog Day: Like Father Like Son actually looks a bit worse than that old Back to the Future game I mentioned, and that’s 10 years old.

Despite being a quarter-century removed from the original movie, Groundhog Day: Like Father Like Son was actually a great idea for a game. And it was neat to come back and check out Punxsutawney in 3D, from a first-person perspective. I also liked all the little references and call-backs to the movie sprinkled throughout (yes, you can drink “To World Peace”). But too often, the gameplay and production values took away from the joy. I’m not sure if the developers were pressed for time or under budgetary restraints, but it just felt rushed and unpolished overall. Like I said before, it’s not so much that Groundhog Day: Like Father Like Son is a totally bad game — it isn’t. It’s just really disappointing that it wasn’t a lot better.

**A PSVR game code was provided by the publisher**

Little Cities Review – There’s a New Mayor in Tinytown
Next The Legend of Zelda: Link’s Awakening Review – From Great to Glorious
Previous Ni No Kuni: Wrath Of The Witch Witch Review – This JRPG Gem Shines