Greak: Memories of Azur Review – With Family, Anything is Possible

One thing that Metroidvanias have in common is the sense of adventure. With exploration at the forefront, players are free to traverse luscious worlds, discovering secrets and opening new paths. Although many have tried, only a select few have managed to reach the upper echelon of the genre. Looking to join the elite is Greak: Memories of Azur. Boasting an incredible hand-crafted art style and unique character switching mechanic, has Navegante Entertainment managed to create a unique experience, that will place the game amongst the greats?

Set in a world that has been decimated by the oppressive Urlag tribe, the Courine people of Azur look for means of escape. With no hope in sight, they turn their attention to an airship that will help them elude totalitarian rule. As Greak, a plucky, young warrior, you are required to collect resources to help the quaint village, whilst also searching for your lost siblings in an enthralling escapade that will keep you hooked throughout.

A Tale of Three

Distinguishing itself from other puzzle platformers, Greak: Memories of Azur allows you to switch between characters to solve environmental conundrums. Each sibling is unique, allowing them to access particular areas due to their abilities. For the majority of the game you play as the titular character, Greak, who wields a sword, can roll through attacks and crawl into small tunnels to discover hidden areas. His sister, Adara, possesses the power of levitation and magic. With the ability to summon projectiles in any direction, this acts as an excellent alternative to Greak’s melee-based approach to combat. The oldest and largest is Raydel, a brutish fellow with a longsword and grapple hook. Each of the characters offers new gameplay elements, helping to create a beautiful pace for the 8 to 10-hour adventure. 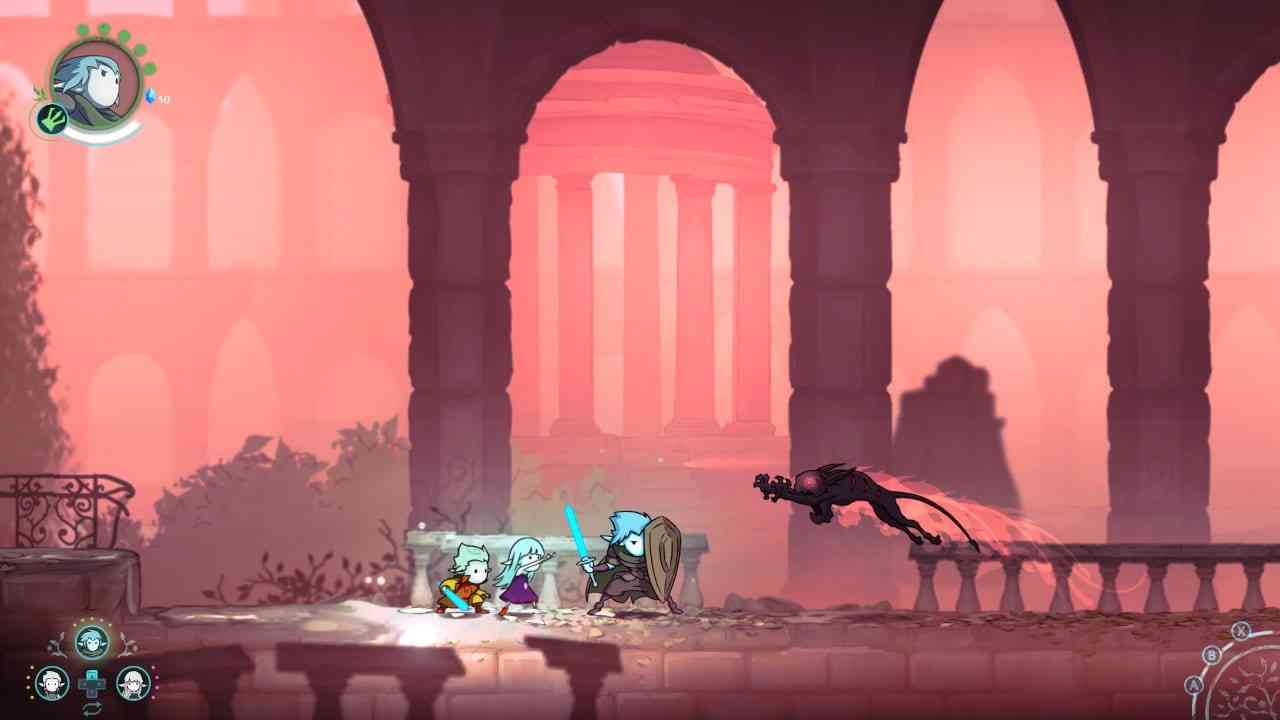 Puzzles start simple and progress in complexity as your siblings join you on your quest. Often, you will be required to switch between characters due to their specific skills. This can be quickly achieved by pressing the designated D-pad input which correlates to your desired protagonist. Selecting the correct avatar becomes a necessity towards the final third of the game and this is where Greak: Memories of Azur shines. Particular segments will have each character in different areas of the map working independently, yet in harmony to create routes towards a common goal.

Navegante Entertainment has created a real sense of unity with the heroes. Not only are family and home key themes that run throughout the entirety of the game, but it has also been entwined in the gameplay. By holding L2, the siblings will travel and fight together, whereas R2 will call the characters to a specific location. While measures have been put in place to aid traversal, it can be difficult to control all of them at once. At times the odd person may not complete platforming sections resulting in having to redo segments.

During your journey, you’ll encounter an array of strange but incredibly well-animated enemies. Each possesses lethal strikes that will engulf a segment of your health, due to this, you are required to be measured and calculated when in battle. Getting to know how an enemy type moves and attacks is imperative to survival, especially when facing fierce and imposing bosses. Upon death, which will happen quite frequently, you’ll be transported back to your last save point. Although a little frustrating, save points are dotted throughout areas giving you plenty of opportunities to not lose progress.

The interconnected environments are diverse and drip with ethereal ambiance. Whilst echoes of Ori and the Blind Forest and Hollow Knight linger, Greak: Memories or Azur does plenty to separate itself from its influences. The ever-changing central hub area houses items and NPCs that give further information about the tyranny and struggles of the community, developing the lore of the universe. The hand-drawn Ponyo-esque character designs combined with mythical backdrops create an alluring world that beckons you to explore. Adding to the rich, multilayered areas are collectibles that are neatly tucked away. Whilst you will revisit areas and become accustomed to the layout, the lack of a level-specific map is a little irksome. Due to this, it can be difficult at times to work out how to get to your objective. 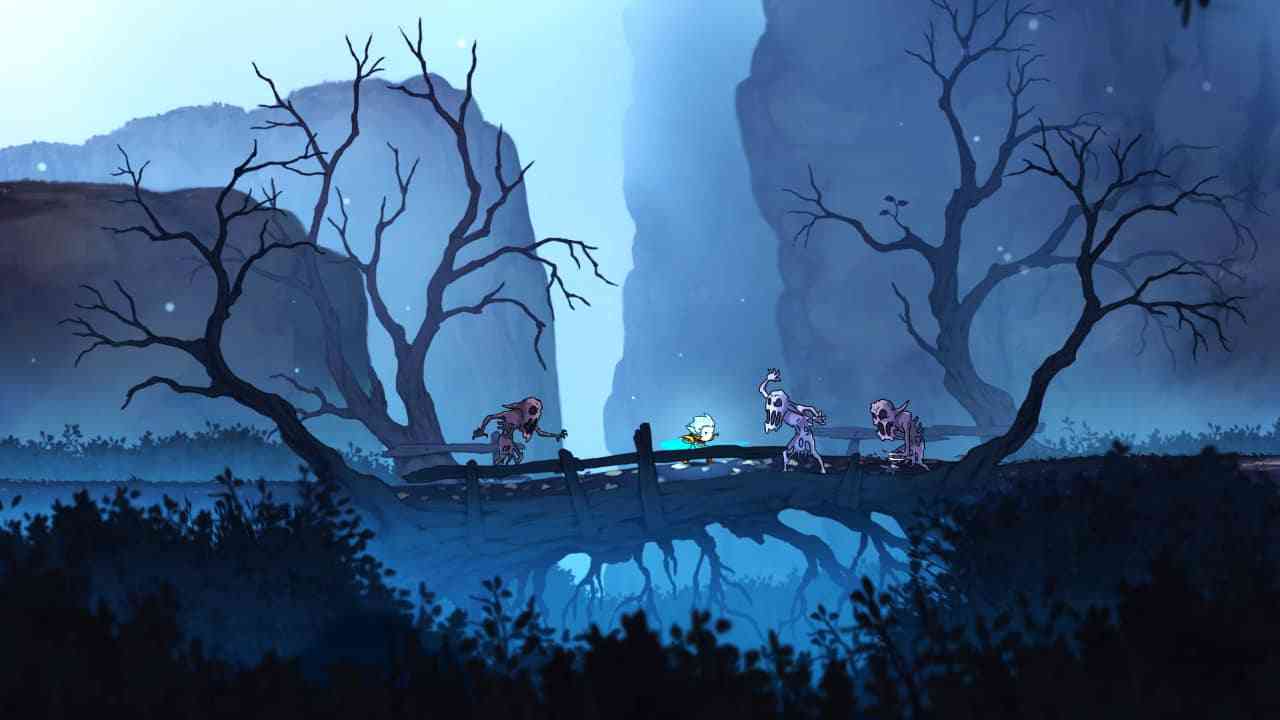 Each step in this glorious world is accompanied by a beautiful and thoughtful orchestral score. The atmospheric soundtrack perfectly embellishes the arduous trek of the protagonists helping to create an emotional experience.

Party members have limited space in their inventory. Although this can be expanded, it still requires a certain level of resource management. Health and attack boosts are littered throughout. Some will give you an instant reward, whereas others require you to cook ingredients to receive a special item. Dropping and swapping resources becomes increasingly important as the game progresses, adding a layer of strategy to your journey.

Greak: Memories of Azur is a heartfelt, thrilling adventure. With three leading characters, the game has managed to carve its own identity within a crowded genre. The jaw-dropping visuals and intricate soundtrack ooze atmosphere, enticing you to explore every inch of the world. Although controlling several characters at once can be troublesome, it takes nothing away from this fascinating, methodically paced, puzzle-platforming quest about family, home and hope. 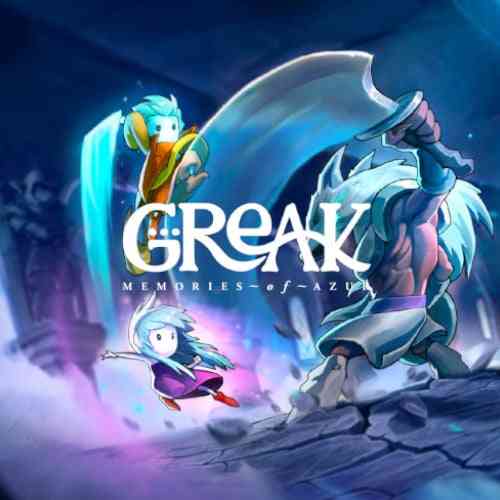