Gravity Rush 2 is a flawlessly beautiful set of mechanics wrapped in gorgeous sets, classy music, and a necessary plot. You play Kat, a gravity shifter who very recently saved her city from total destruction.

This game’s story opens the same way Gravity Rush did, with Kat waking up in an unfamiliar environment before awakening to her powers. The game makes you languish about powerless for a bit longer than the previous installment if only to reinforce the stark difference her gravity-shifting makes. The second installment also introduces a new city-state with a totally different flavor to it. Both games subtly blend various real-world cultures to create something that feels familiar yet indistinct. Actually, I’m just sort of culture-blind, so I want to avoid making any assumptions. That being said, the first felt game felt french to me, while this installment has a more south seas vibe. Your experience may vary.

The controls are just as good as the previous installment. Flying around still feels dangerous and exhilarating. It’s hard to tell if certain game mechanics have changed or I just got better at playing the game. During the first game, the stasis field felt like a clumsy afterthought. This time it’s a force of nature used to win otherwise impossible battles. If there’s debris around and you have a clear shot at your opponent, you can pummel them mercilessly. It doesn’t feel overpowered as much as it feels good.

“The controls are just as good as the previous installment. Flying around still feels dangerous and exhilarating.”

The new ways of gravity shifting are awesome. Lunar style makes you feel like a superhero, more so even than flying does. Jupiter style gives every impact a lot of weight, but the extra oomph comes with a cost. The two new styles drain your energy even faster. For all their benefits there’s an equivalent drain on your resources. This balance forces you to choose styles carefully, as late-game missteps can be costly affairs.

Gravity Rush 2 really is absolutely gorgeous. The multi-hued skies, the floating cities powered by gargantuan crystals, the Nevi– oil slick shadows with burning cores. Collecting the gems for upgrades is a pleasure for me on a purely aesthetic level. Just the sight and sound of those floating pink jewels as they’re added to my inventory is its own form of escapism. 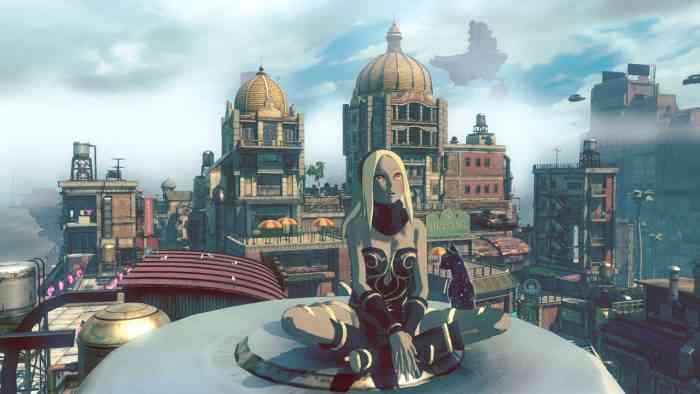 The music in this game feels like the score for a film. People talk about games being, or needing to be, more cinematic. I don’t understand the impetus to push things in this direction, but hearing this music I at least understand the need to use the term. The music, something you hardly even notice unless you set out to, goes a long way towards creating an immersive environment.

My issues with the game stemmed from the side quests. I loathed flying around and looking for things. Exploring the cities is the most fun when you’re doing so for your own reasons. Being forced out there to track down the exact location a photo was taken just feels like a chore. These photo quests ended up as one of my playthrough’s major low points. There’s a variety of these that all center around you using a photograph to search out some location or person in the game, These tedious side quests kill the game’s momentum, forcing you to carefully pick apart sprawling, multi-level maps to find one guy with dreadlocks and a vest. Or a specific red-and-yellow awning. The quests also lost momentum when you had to grill townspeople for information. The act of wandering the streets, asking everyone you see about your current objective ground everything to a halt. I like exploring and sightseeing. This game is beautiful enough that doing so can be a welcome distraction. Unfortunately, panhandling for clues detracts from this experience.

“Whether or not you’ve played the first one, Gravity Rush 2 is a game you can’t afford to miss.”

The game’s narrative is a serviceable one. Nothing feels especially wrong with the story. All the major beats are hit, all the loose ends are tied up. But it’s a little standard at times. People betray you or change sides exactly when they’re expected to. People swoop in to save you at the perfect moment. Maybe it’s a necessary evil, but it feels at points like the narrative is in service to the game’s mechanics. If there was ever a game where such a choice was appropriate, it would be Gravity Rush 2. Still, the story felt too familiar, too secure to really hook me. 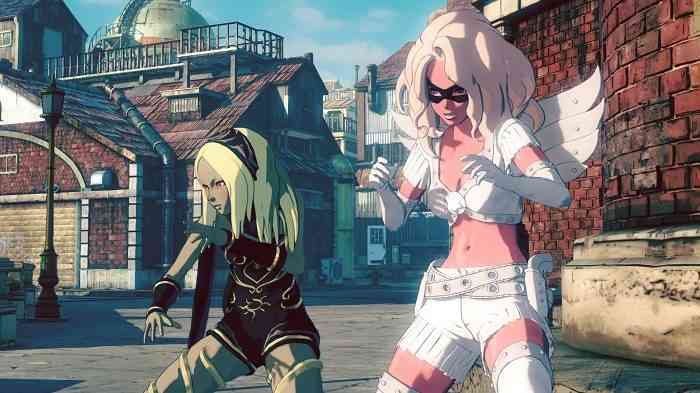 Another problem I had was with the upgrade system. Whereas in the first game you were able to boost a greater variety of stats and powers, this time you can improve your combat abilities only. On top of that, the amount of gems needed to max out any one section of your skills is staggering. I don’t mind grinding for gems. That just means more combat and exploration, two things I love doing anyways. But it feels like you would need to do a TON of grinding in order to max out your skills. On the other hand, the skills you can level up don’t feel like they need to be upgraded in order to finish the story. So to that end, it’s the sort of imposing task you would only take on if you really wanted to.

For all my little grievances, this game is still incredibly fun to play. The mechanics involved in moving, fighting and exploration are sublime in their execution. The slapdash way you rip through the skies just doesn’t get old. The combat feels tense, your mistakes are your own and there are multiple ways to win every fight. Even if the story and the side quests failed to hook me, I’m still itching to go back and explore. To unlock more outfits. To max out the skills. Whether or not you’ve played the first one, Gravity Rush 2 is a game you can’t afford to miss.