As I sit to write the review for Grand Theft Auto: The Trilogy – Definitive Edition (GTA: DE), I can’t help but be reminded of Vito Corleone, lamenting over the massacre of his boy in Francis Ford Coppola’s ‘The Godfather.’ I think many like-minded 30-somethings that grew up with Grand Theft Auto consider these games as more than just nuggets of blissful, adolescent nostalgia born out of sunny Saturday afternoons spent indoors. They’re very much part of the foundation that developed us into the gamers we are today. And so, we keep them close to our hearts, as if they were a long-lost friend.

With that being said, I can see why the GTA: DE currently sits with one of the lowest user scores ever recorded in Metacritic’s history. Fans of Rockstar’s unique, bizarre, and outlandish take on the “American dream” feel as if they were bamboozled, hoodwinked, conned – if you will – into thinking this collection really would be the definitive way to play three of the most beloved games in history. And I hate to say it, but their feelings aren’t entirely unjustified.

I think it’s important to keep in mind that Rockstar did market Grand Theft Auto: DE as a collection that will retain the look and feel of the originals while bringing a few quality of life enhancements and visual upgrades along for the ride. And to their credit, I think that they almost hit the mark. There are times when Vice City’s neon-laden streets or San Andreas’ cascading sunlight illuminate scenes in ways I never thought possible. And vehicles now have a distinctive shine to them that does a serviceable job in reflecting light. Though everything else on the street (windows in buildings, for example) lacks the same sort of detail, creating an awkward mishmash of old and new that screams a lack of direction. 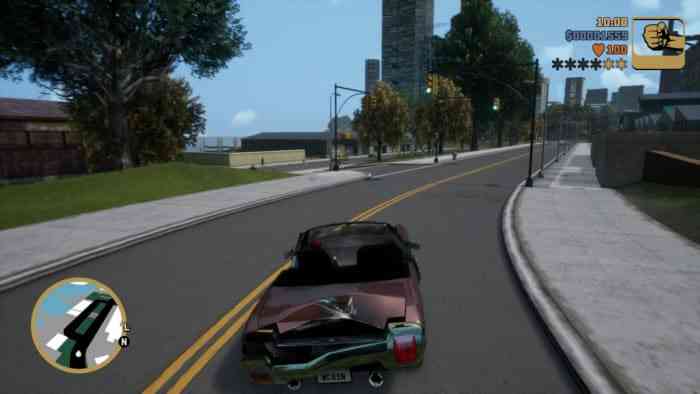 Character models are also an unbalanced mess. Claude from GTA III somehow looks like he was created generations ahead of San Andeas’ CJ. Vice City’s Ken Rosenberg looks like his face was re-arranged with a shovel. And don’t get me started on the NPCs – most of which look like literal goblins you’d see in Lord of the Rings.

Now, I could have looked past all of this nonsense if the GTA: DE made an effort to somewhat modernize its gameplay. I’m not saying Grove Street Games needed to make these perform like GTA V, but it feels like they made a conscious effort to come to work, adjust as little as possible, and call it a day. 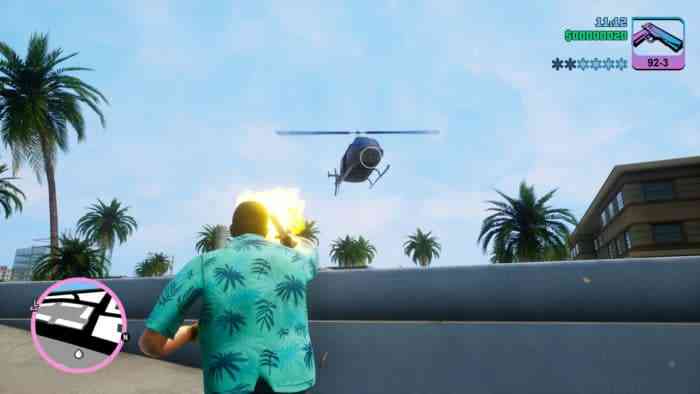 While the additions of checkpoints and quick load times are a godsend for people that hated having to replay the entirety of a mission upon failure, any other changes that may have been made to the gameplay feel minimal at best. All three games still play as if they’re twenty years old – and not in a good way. Here’s the thing, though; It’s easy to look back with rose-colored glasses, reminiscing about how well these games performed during your childhood, but the fact of the matter is, they didn’t. There was always a level of jank prevalent throughout the series, all the way through the fourth installment, and for better or worse, GTA: DE retains all of that wonkiness and then some.

Much of this stems from the (apparently) updated controls. Sure, there’s a weapon wheel you can use to quickly select your next instrument of destruction. But that’s about as far as the improvements go. Make no mistake – all three of these games play precisely as they did two decades ago. Aiming is slippery and imprecise, even with the auto lock-on feature enabled. And the lack of impact when firing your guns is made frustratingly apparent by the developer’s choice to forego making use of the controller’s vibration. 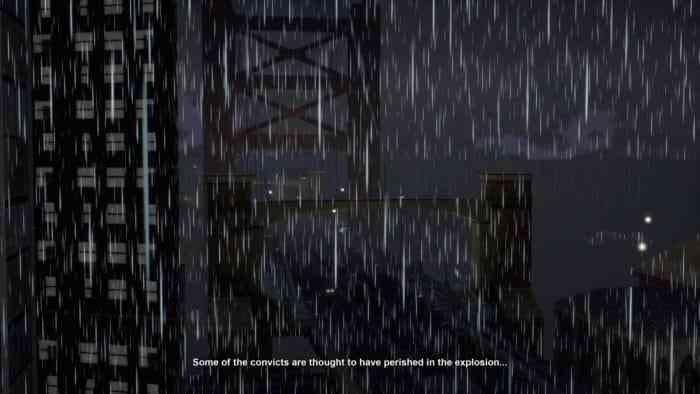 It’s not just the lack of a genuine update to the controls or visuals, either. The GTA: DE is plagued with technical issues, ranging from audio hiccups and severe pop-in to inexcusable screen tearing and baffling framerate drops. There is no reason these games should force us to choose between performance or fidelity modes, and Rockstar should, quite frankly, be ashamed that they run as poorly as they do. Even on the performance setting, you’d be lucky to go 15 seconds without seeing the framerate dip.

Here’s the thing, though; despite every issue that the GTA: DE suffers from, I’ve still been having a good time with it. Which is simply a testament to how well-written the Grand Theft Auto series is. The GTA: DE needs a patch. Or, maybe, it needs a boatload of patches. Though, I still find myself enjoying the over-the-top storylines, ridiculous dialogue, and outrageous mission structure. It’s hard to call these definitive, but still easy to call them classics. 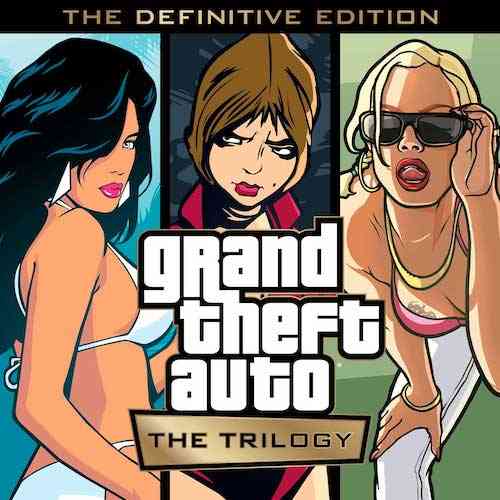