Who’s ready for a prehistoric adventure of gigantic proportions? Welcome to Gigantosaurus: The Game, based on the hit Disney Channel TV series Gigantosaurus, which itself was based on a series of Gigantosaurus books. In Gigantosaurus: The Game, you’ll explore the Cretaceous period as four young dinosaurs as they embark on an epic quest to save their home. They’ll explore several different environments where they’ll encounter all sorts of different dinosaurs. You’ll be able to tackle this adventure on your own or with up to three friends thanks to the games couch co-op feature. Is Gigantosaurus the Game the Jurassic Park of games or is it extinct-on-arrival? Let’s find out.

Gigantosaurus begins when a meteor crashes down from the sky and blocks a massive volcano which causes all manner of chaos. Giganto the Gigantosaurus embarks to unclog it, but he’ll find he can’t quite do it alone. Fortunately, four young dinos decide to tag along to help the giant beast. You’ll travel through five large, uniquely-themed worlds, from a desert wasteland to a wintery wonderland.

The Land Before Time

In Gigantosaurus, you’ll take on the roles of Rocky, Tiny, Mazu and Bill as they embark on a journey to help Giganto save their home. The main objective in each of the first four worlds is to rescue four hidden dinosaur eggs. One of the best features of this game is the instant drop-in/drop-out co-op feature. In co-op, you’ll all share the same screen – which can be a bit of a hassle if you’re playing with someone who likes to wonder off. Each world is structured in a sort of open-world way that allows you to explore any way you like. Scattered throughout the worlds are plenty of additional, optional collectibles. The final world takes a slightly different approach, but I wouldn’t want to spoil that from any potential players here. 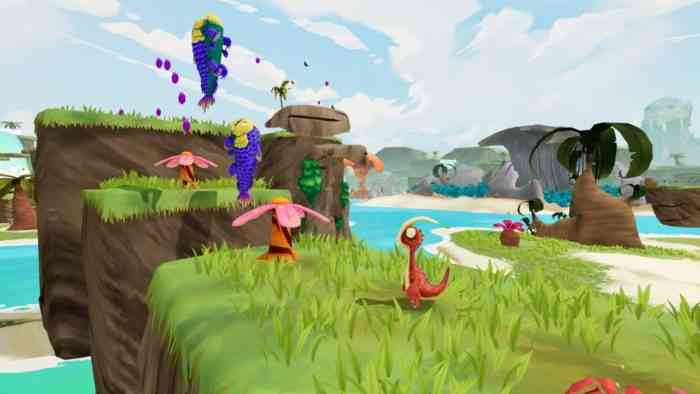 To save the hidden dinosaur eggs, along with the other collectibles, you’ll need to navigate a series of platforming sections that range in difficulty. Each of the four young dinos plays essentially the same, allowing you to jump and attack. However, some sections will require a specific dino to perform a context-sensitive move – but switching dinos is fast and easy. I mention attacking, but it’s less about hitting enemies – you can’t hurt or kill anything, you’ll just use your attack to smash certain objects. The only way to deal with enemies, ranging from vicious velociraptors to sneaky scorpions, is to avoid them. Probably one of the biggest annoyances is when you find a hidden dino egg, you’ll have to carry it back to the start, which adds a bit too much backtracking. I feel I probably would have explored more and tried to get more collectibles if I didn’t have to backtrack as much.

Once you’ve collected at least four dinosaur eggs, you’ll be able to race to the next world. And when I say race, I mean race. In true prehistoric fashion, the four dinos will hop into cars and race to the next world. The racing sections were a nice break from the platforming. Once you finish a race, you’ll be able to select it from the Start Menu at any time. Unfortunately, the final race has some disappointing glitches that cause your racer to veer off course every time you hit a jump. Hopefully, a patch will resolve this issue at some point.

While the game is inspired by a Disney Channel cartoon, the visuals are nowhere near the same level of quality. Visually, the game looks very dated. We’re talking early Xbox 360/PS3 era graphics – and even that might be generous. Mind you, this game, like the show, is geared towards a younger audience who might not be as critical. There are also moments in the game that are visually quite neat, like sliding down massively long slides. The game’s music is upbeat, the characters are voiced, and the story is fully narrated. Sometimes it shocks me when games geared towards kids don’t actually have voice-acting since young kids can’t read, so I was impressed with the extra effort that went into Gigantosaurus. I can’t confirm if the voice actors in the game were the same as the ones on the show, but they definitely sounded similar. 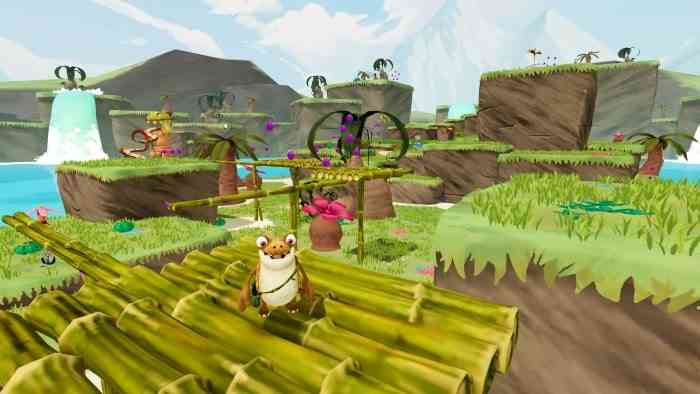 Gigantosaurus: The Game is the type of game that is difficult to recommend for everyone. The platforming gets a bit tiresome, the graphics are quite dated, and the overall package is geared towards a younger audience. If you have young gamers in the house, especially those familiar with the TV series, then this might be perfect. Another group of gamers who might get a kick out of this game are those that long for classic collect-a-thon platformers like Donkey Kong 64. Breaking up the platforming with some racing sections was a clever idea. Some of the in-game power-ups and sliding down slides were pretty neat – kids will definitely get a kick out of these moments. If you’re in a rush, you could probably wrap up the game in an afternoon. Those dedicated to the collectibles could probably stretch the playtime to 8 or so hours. One final note, as a parent, I always appreciate developers who put in a solid effort making kid-centric games like this, so props to the development team for that. 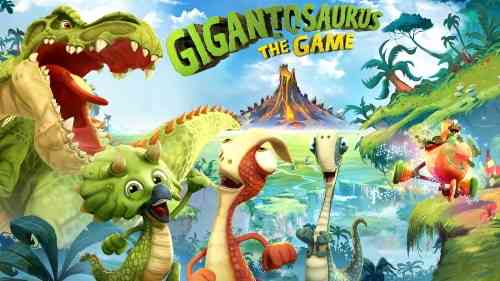