The zenith of combat racers lies behind in the rearview mirror of console generations gone by. Destruction Derby, Twisted Metal, and Road Rash, to name a few, had their best days in the first three console generations. These offered darker versions of Nintendo’s crown racer – the Super Mario Kart series. There is a reason the Mario series has endured, and it’s not the bright colours and colourful characters. It’s the gameplay and level design. Things that other arcade racers have failed to incorporate.

Gas Guzzlers Extreme is no exception.

Gas Guzzlers Extreme released as a PC game back in 2013, but the look and feel of it seems even older. “Drab” is the best description. The game looks more dated than similar games that came out back in the PS2 days. Everything looks dull and fuzzy. While post-apocalyptic vistas make for great mood setters in movies, in video games they are death. There exists a strain of video games – this occurs in movies too – locked into a pale palette of colours where the spectrum is confined to dull browns, blacks and grays.

This palette which Gas Guzzlers Extreme dwells in creates an instant sense of “been there, done that.” Flat desert landscapes do not lend themselves to creating racing environments with clever level designs. It’s not impossible, but certainly a more difficult challenge. A challenge beyond Gas Guzzlers Extreme’s grasp. The level design here is uninspired and this becomes quickly apparent as you work your way through them and they all blur into one.

The lack of variety in the race courses extends to all areas of the game design. The music is generic rock and the announcers are ripoffs of Arnold and Duke Nukem. Fortunately they can be turned off. There is also a running list of useless status updates of the other racers that do nothing more than provide screen clutter. These also can be turned off. 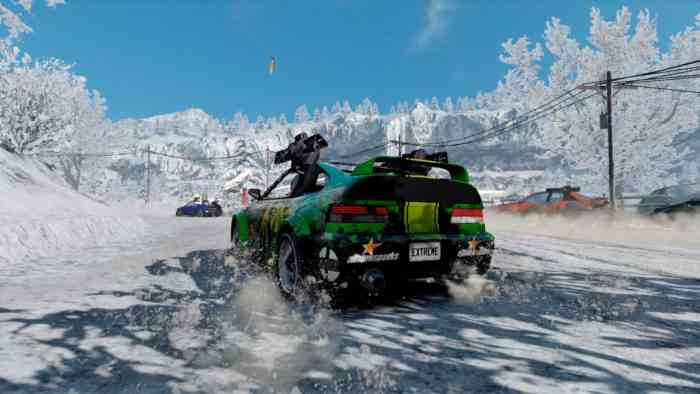 When you start up the game, the first race demos the game mechanics, but it also places you in one of the premiere versions of the cars which leads to a false set of expectations. That initial race is frantic, fast, and furious. Hang on to those impressions because it will be a long time before you can get back to that level.

After that race demo you start the actual campaign and are kicked back from a fully locked and loaded V8 turbocharged terror and put into baby class. We’re talking Austin Minis style vehicles here – some of them are even three wheelers!

So here comes the next uninspired game choice – the grind. You have to work through a lot of races to get anywhere near the level of that initial demo race. Pretty deflating. 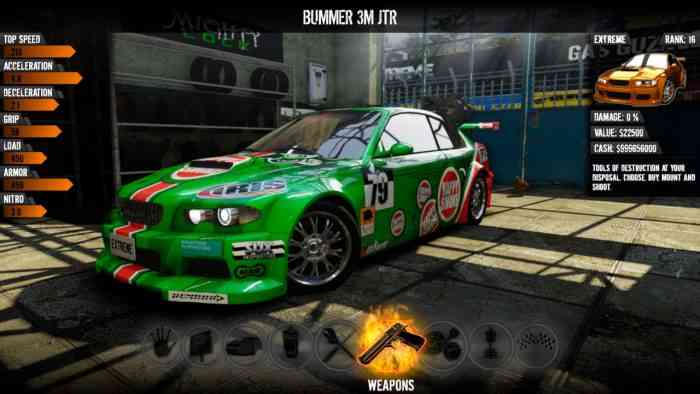 No Escaping The Rubberbanding

As to the actual races themselves, the vehicles do handle half-decently. But that virtue is undercut by the drab graphics which makes the power-up icons on the courses difficult to pick up. That’s not the worst of it though. The bane of arcade racers rears its ugly head: Rubberbanding.

No matter how well you do, you’ll never pull away from the pack. It’s the cheapest of AI solutions and undermines any sense of accomplishment. There’s no escape from it either, as the game does not support multiplayer. So it’s AI racing or nothing.

Nothing is the better choice.