Heroland Review – We Can’t All Be Heroes

Originally released as WORK x WORK in Japan, Heroland has made its way west almost a year later. Heroland featured a modest amount of hype behind its original release as its staff included Mother 3 director Noboyuki Inoue, who wrote the story, and Mother 3 artist Nobuhiro Imagawa. Despite the legacy behind its development staff, expectations for the game should be tempered given the relative size of the game. On its surface however, Heroland appears to feed into its vibrant art style and quirky humour with an addicting gameplay loop.

Heroland puts you in the role of a brand-new employee of Heroland, specifically hired as a tour guide. Heroland is not your typical theme park. Rather, it is more of a resort that allows for people to come and live out their hero-like fantasies of conquering dungeons and defeating evil lords. Think Westworld… but in the vein of a typical fantasy RPG. Regardless, the player-character soon encounters a situation that calls for his seemingly permanent position of tour guide.

As a tour guide, the player’s role in the game is to guide various heroes and party members through dungeons in search of valor and treasure. As the guide, players are responsible for selecting the team’s tactics, keeping the heroes alive, and assisting when necessary. Essentially, getting the party through dungeons alive is a good barometer of success. Though most of the gameplay elements such as selecting attacks are automated, player choices when assisting are still paramount to success.

While enemies are not real monsters (they are your castmates and fellow employees), their defeat will increase customer happiness and affect how they level up. Selecting equipment, party members, and formation all play a role in the game, though it does get a bit mundane after a while. The good thing about Heroland is that it can be played in chunks. Dungeons are separated into battles, events, bosses, and treasure rooms. Players move from panel to panel, allowing for “snack-sized” gameplay moments perfect for a quick play session whenever.

The game’s writing, like its gameplay, is best digested in chunks rather than as a marathon. While the comedic aspects of the game has its moments, they can be a bit ridiculous depending on ones tastes. However, the writing fits the aesthetics very well, and the game as a whole remains on brand constantly. While the gameplay can get a bit mundane, the ability to speed up battles is always appreciated, especially when going back to older dungeons to level grind characters who have been left behind. 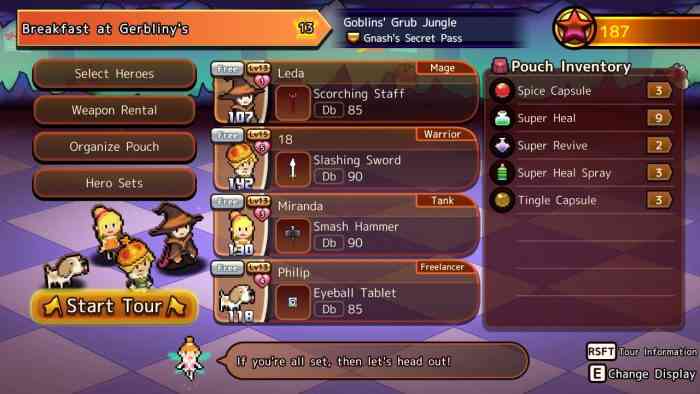 Moving on to the game’s aesthetics, Heroland’s art direction remains consistent with the rest of the game, providing a lighthearted feel to the game. The colors are vibrant while the game remains looking relatively simple but effective. The characters are well designed, making them unique and fitting their personalities as well. I quickly found a couple characters myself that became my favorites, making me become more invested during battles in keeping them happy.

All in all, Heroland is a solid title which finds its niche, sticks to it, and ramps it up. Its humour and style may not suit everyone, but for those it suits, they will love it. While the game starts a bit slowly, it won’t take long for one to dive deep into it, though the game can be enjoyed both in small chunks as well as much larger ones. In Heroland, you won’t be the hero, but you will enable everyone else to be, and that’s perfectly fine. The game turns the RPG genre around just enough to keep things interesting, and who knew that being a tour guide in an RPG theme park could be so fun?