After that PS1 version, there was also a GameBoy Advance version, with subtly updated pixel graphics, four extra jobs, and a bonus dungeon. And now, with the release of the Final Fantasy Pixel Remaster series, North America has a third version of this JRPG classic. The Final Fantasy V Pixel Remaster is based on the Super Famicom original version, so it doesn’t have any of the extra features from the GameBoy Advance version, or the opening and ending cutscenes from the PlayStation version. The Pixel Remaster translation has also named Butz (the fan translation name, closer to the Japanese name) as Bartz (the name used in the North American PS1 translation), because butts are too funny!

The story of Final Fantasy V is about a Chocobo-riding nomad named Bartz, and his chance encounter with Lenna, Princess of Tycoon, who is on her way to the Wind Shrine to see why her father hasn’t returned home. On the way they meet an old man with amnesia named Galuf, and a pirate captain named Faris. When the group arrives at the Wind Shrine, they find the Wind Crystal shattered. An image of Lenna’s father appears and tells the party that they have to protect the other crystals at all costs, because they seal away a powerful Sorcerer named Exdeath. To go into any details beyond that would be major spoiler territory. I love Final Fantasy V’s story, but compared to every Final Fantasy game from IV onward, it’s easily the most meager.

While Final Fantasy V is kind of a story update of the original Final Fantasy game, with the crystals, Four Heroes of Light, etc. Final Fantasy V feels more like a sequel to Final Fantasy III, because of its enhancement of III’s job system. In that same sense, it also functions as a precursor to the PS1 mega-classic, Final Fantasy Tactics, which was many Western player’s first strategy JRPG (sorry Shining Force). Gameplay is classic top-down JRPG town and dungeon exploration, combined with turn-based battles. The Active Time Battle system from Final Fantasy IV returns, but now with a gauge to show players whose attack is up next. 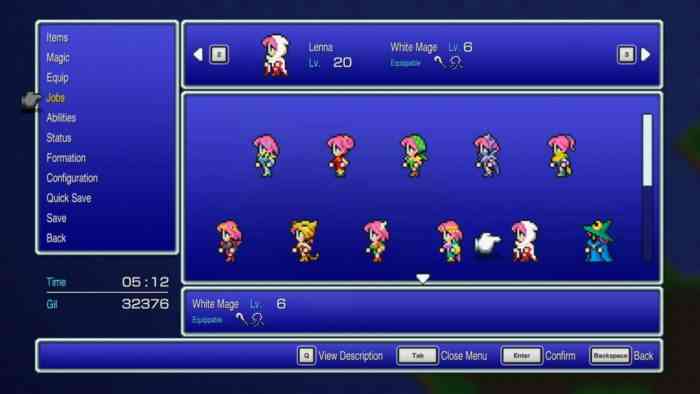 What makes Final Fantasy V stand out from other 16-bit JRPGs is its job system. There are 22 jobs that can be learned and equipped to characters, each with different abilities. Characters level up with experience points, and jobs gain new abilities through separately earned ability points. Characters can also have a secondary job equipped to create combinations, such as a Knight that can cast White Mage’s magic. This job system creates staggering customization options for the four playable characters, and gives Final Fantasy V a lot of replayability.

The graphics of the Final Fantasy V Pixel Remaster are a very subjective matter. Obviously, the best scenario would have been for Square-Enix to include the option to change graphics from the Super Famicom original version to the Pixel Remastered one, but honestly, I really think these Pixel Remasters look gorgeous. The updated pixel art is stellar. Some of the effects and the super sharp text might look a little too mobile game-ish to some, but they didn’t bother me. The re-arranged music sounds wonderful. The Final Fantasy series has some of the most cherished scores in the history of videogames, and Final Fantasy V introduced the world to some series classics, including “Dear Friends” and “The Battle on the Big Bridge”.

Quality of life improvements include a fast forward/ auto-battle feature, 8-directional movement, the ability to save anywhere, and tweaked difficulty. The ability to speed up battles on auto was a very welcome feature for any time I was overpowered, and only needing to attack. Moving in 8 directions and saving at any time are also always welcome additions. But my biggest complaint about this Pixel Remaster is that the modernized difficulty makes it too easy. I wish this was an option instead of the standard, because there wasn’t much need to grind, even to beat the toughest bosses, and it sort of stripped me of any sense of accomplishment. I like the old-school JRPG bragging rights that came with beating a game. Sure, a lot of RPG fans don’t like to grind, but eliminating it from the end game took away hard-earned feels when earning powerful gear, and destroying powerful bosses. 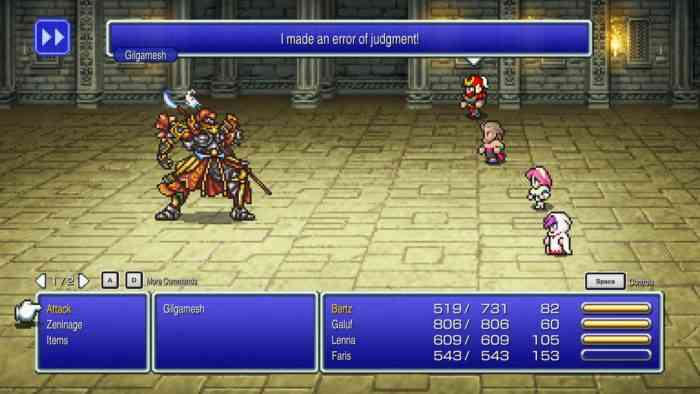 Extras include an in-depth bestiary, music player, and art gallery. The tracklist for the music player and illustrations in the art gallery are unlocked even before starting the game. Seeing Yoshitaka Amano’s concept art for the different characters and events was a real treat for this long-time franchise fan.

As much as I loved playing through the Final Fantasy V Pixel Remaster, I can’t call it the definitive version. A definitive version would have the GBA bonus content, the PS1 cutscenes, the option to switch graphics and music, and multiple difficulties. But what we have is a beautiful version of a JRPG classic that has not been widely distributed outside of Japan. It’s an amazing game that holds up really well today. So, if anyone from Square-Enix is reading this review, please release the Final Fantasy Pixel Remasters on console, with physical editions. I would buy the heck outta that. 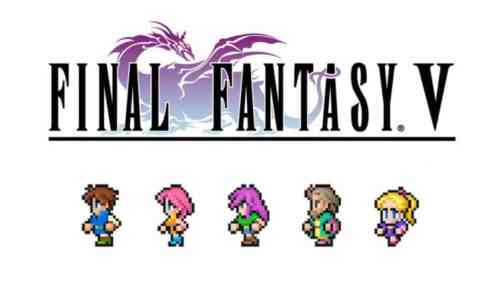