When the term Battle Royale gets bounded about, immediately we think of games such as Fortnite, Apex Legends and Call of Duty: Warzone. All similar, all shooters. Smashing through the conventions of the genre is Mediatonic’s Fall Guys: Ultimate Knockout, a frantic and colourful spin on the genre, but will their effort cross the finish line or trail hopelessly behind the others?

Much like other Battle Royale games, you compete in order to be crowned the champion but where Fall Guys: Ultimate Knockout differs is in its concept. Emerging victorious is paramount but 59 players stand in your way. Featuring courses reminiscent to Takeshi’s Castle and Total Wipeout, you must jump, slide and push your way to the front. Completing stages faster than your competitors is the goal and doing this grants you entry to the next zany round.

Each of the game’s five rounds alternate on each run. From hurdling obstacles to collecting eggs and from balancing on boards to dodging massive bouncing balls, each round is diverse and entertaining. With 25 different stages and post-launch content planned, Fall Guys: Ultimate Knockout has concocted the perfect formula to keep you hooked on this adorable, action-packed game for a long time to come.

Taking inspiration from titles such as Human Fall Flat and Gang Beasts, the characters are wobbly Jelly Beans that you can dress up how you like to slip and slide your way to victory. Characters stumble about and don’t control perfectly but this adds to the overall ridiculousness of the game. In one stage you work as a team to collect as many eggs as possible, but this was rather difficult due to the controls. When attempting to grab an egg, at times it worked as it should but other times not at all, which made some stages more frustrating than fun. 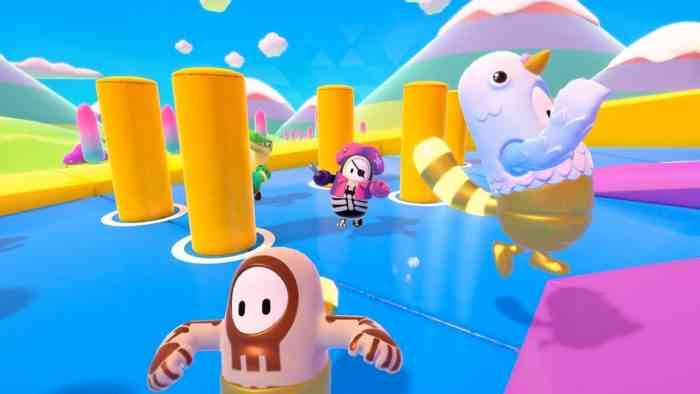 The bright colour palette and overall design is charming and suits the manic world created. The glossy characters, bubbly music and vivid environments may lead you to think that the game is childish and trust me, it is. It’s childish to laugh when an avalanche of people slam headfirst into a closed-door but we all do it. At the end of the day, this a game you shouldn’t take seriously. So sit back and enjoy the wild ride!

Following the trend of other online games, Fall Guys includes ‘seasons’. After a game, you earn XP, Kudos (which are also purchasable) and Crowns to unlock a range of cosmetic items to style your Jelly Bean as you wish. Although it’s disappointing to see the monetization included in the title, the promise of continued support and content is reassuring.

Pick up and Play

One of the game’s greatest assets is its accessibility. No matter your age or skill level, anyone can jump on and enjoy the good-natured silliness that Fall Guys is smothered in. Although local multiplayer is absent, the rounds are quite short and hilarious to watch. Onlookers scream and yell instructions to the bewildered player who attempts to navigate an unstable blob across an unpredictable and precarious course. Ultimately, you will fail, but this is truly a game where taking part is just as enjoyable as winning. Also, when you do plummet to your demise and fail to make the cut, you will undoubtedly mutter those faithful words, “Just one more go”. 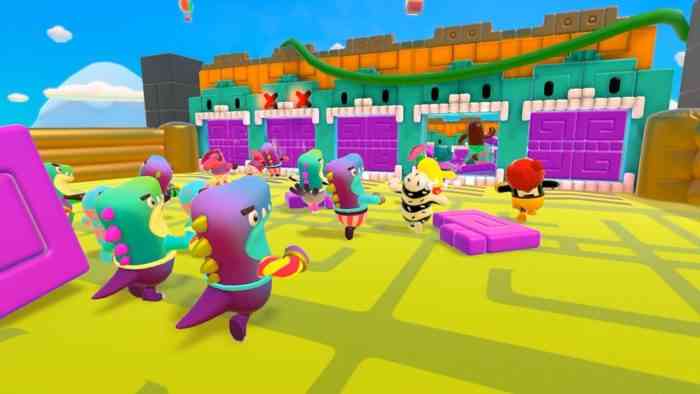 Unfortunately, the game has had a rocky start to life. Due to its immense popularity, the servers have been unstable which has resulted in various issues: at time games have crashed, parties have been disbanded and the servers intermittent. Mediatonic have reassured fans that measures have been put in place in order to resolve the problems but at the moment, brace yourself for a turbulent ride.

I hate to break it to you… but this is your new addiction. After hours and hours of running, jumping, pushing and collecting, I finally turned off my console. Continuing with my daily routine, I heard a faint voice calling, beckoning me. I knew I needed another hit, a fix to get me through the rest of the day. Within minutes I was back on, yelling, laughing and in hysterics. Mediatonic have created something special and the game’s popularity on streaming services such as Twitch will soar, in turn helping to cement Fall Guys: Ultimate Knockout as the ultimate battle royale game.

Simply put, Fall Guys: Ultimate Knockout is brilliant. Its creative take on a much-loved genre will keep fans coming back for more. Although there are teething issues, these are minor concerns that will be resolved. Featuring 25 mini-games with more in the pipeline, expect to spend plenty of time with Fall Guys.