Activision Lets Fans Know What To Expect In The New Season

Since Call of Duty Warzone first launched, it has continuously released new content through its four seasons. With Season 5 just one day away, Activision has outlined what fans of Warzone can expect from the upcoming season of the game. 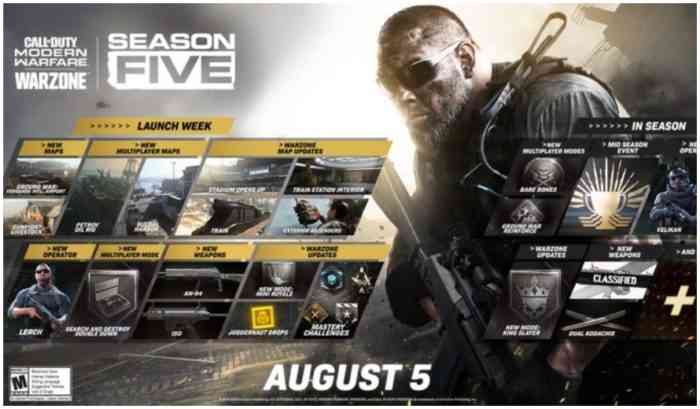 In the blog post, the company stated, “Get ready for an overloaded Season of complimentary content with the biggest Warzone map additions ever seen, four Multiplayer maps, new Operators, and a comprehensive Battle Pass system brimming with content, including two free weapons and other goods available to unlock.” The company continued, “As the chaos intensifies across Verdansk and the Armistice alliance becomes strained beyond its breaking point, a new force descends into the conflict. Shadow Company makes an explosively memorable entrance into the world of Modern Warfare, dropping in with style to make a statement and bolster the Allegiance, despite the company’s fireteam seemingly operating independently under their own set of rules.”

One thing that was confirmed is that players will be able to enter Stadium and Train Station for the first time. In addition, Season 5 will also change the way players interact with the map, thanks to the Exterior Ascender and the Freight Train. Over the past few months, fans have complained about the lack of versatile movement in Warzone. The Exterior Ascender addresses those issues by allowing players to scale the outside of large buildings. Season 5 will also allow players to unlock the AN-94 assault rifle and the ISO SMG, and two new operators.

As a fan of Warzone, this looks to be the best season since the game launched. Personally, I am excited to be able to scale large buildings, rather than have my team funnel through flights stairs to our death.