When it comes to vampires, how do you roll? Are you into the sparkly, broody, emo bloodsuckers, or more on team Nosferatu? If your concept of a vampire is more monster than man, you’re going to enjoy Evil West. But aside from its bloodthirsty undead, how does Evil West fare as a shooter with an old-school vibe?

Evil West comes from Flying Wild Hog, a studio that’s been tearing it up lately with the rebooted Shadow Warrior franchise and, most recently, Trek to Yomi. Evil West is a third-person shooter that looks at the landscape of recent action games and tosses aside anything that gets in the way of the fun. You don’t have to worry about hoarding ammo, for example, because it never runs out. You don’t need to collect healing potions or rest at a campfire or warp back to town to upgrade your gear. The game is pretty linear, but there are some secret areas and treasures to find. There are lots of environmental puzzles, too, but it’s almost impossible to get stuck. In other words, Weird West wants the player to focus on the action, settings and story. And did we mention fun?

Evil West is set in an alternative history American west. Post-Civil War Democrat Grover Cleveland is President but there’s still a war going on. It isn’t between North and South, though, but between humans and the Sanguisuge (literally, bloodsucker), vampiric monsters that take many forms. The government secretly hires the Rentier Institute to control the vampire plague. The Institute and its vampire-slaying foot soldiers have been controlling the undead and other monsters for decades, with the population largely unaware. 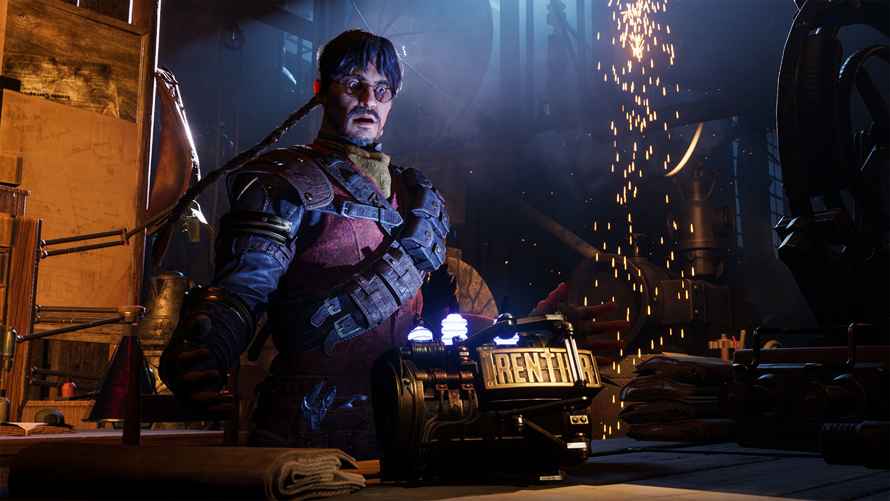 You play as Jesse Rentier, the son and heir apparent of Institute founder William Rentier. The Institute is nearly destroyed by a Sanguisuge sneak attack, your father is wounded and only a handful of the best monster hunters survive, including you. Over the next sixteen or so levels, your goal is to travel to iconic Western settings, root out and kill the vampires and monsters, and work your deadly way up the Sanguisuge chain of command. Or maybe down, as the big bad is a young girl, a child with the power to command demons.

In Evil West, your character does not collect a small warehouse’s worth full of weapons and gear. Instead, Jesse relies on a relatively small number of weapons that grow more powerful throughout the game. He begins with a revolver, a rifle, a sawed-off shotgun and a multipurpose gauntlet that uses electrical energy both offensively and defensively. Other weapons include the Zipper, the Crippling Rod and the flame-throwing Scorcher. All of Jesse’s weapons can be upgraded at a cost of coin. Additionally, when Jesse levels up, he can select from several skill trees that improve things like healing speed or using weapons more effectively. There’s absolutely nothing innovative about these mechanics, of course, but they strike a good balance between depth and simplicity. Best of all, just about any choice is a viable one, depending on your playstyle.

Speaking of fun, combat in Evil West is a flat-out blast, no joke intended. Switching between Jesse’s weapons, melee and special attacks is fluid and intuitive. Each level introduces at least one new enemy type and most battles are large-scale fights between Jesse and a wide range of vampires. Because each of them have specific strengths and weaknesses, a typical encounter will require constant movement and varied strategy. Things get pretty chaotic and intense. Evil West’s environments play a major role in battle, too. There are plenty of spikes on which to impale monsters and handy crates of dynamite to use for crowd control. 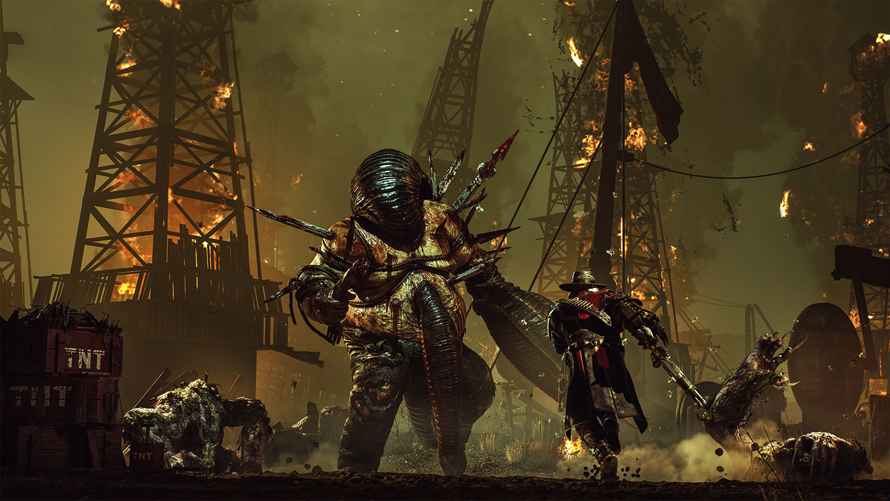 Monsters come in relatively typical flavors. There are flying vampires, tanky armored vampires, poison or fire-throwing undead, etc. If there’s a criticism, it’s the same one I had about the developer’s Shadow Warrior reboot. There are lots of creative ways to kill monsters, but there isn’t much variety in the pacing and structure of the fights, aside from the boss battles.

Like the novel Abraham Lincoln: Vampire Hunter, Evil West takes place in a 19th-century American swarming with the undead. And, like BioShock Infinite, it merges American history with gothic, steampunk elements. Evil West tosses in some references to a number of historical figures. After all, 19th-century American pop culture had an obsession with the occult, and now we know why. From the design of the weapons to the narrative and characters, Evil West takes pleasure in imagining the American west as an elaborate game of cowboys and vampires.

From the gruff and gravelly Jesse Rentier to the other handful of main characters, Evil West’s voice acting is very good. The script itself is sardonic and less overtly joke-filled than Shadow Warrior. Though, come to think of it, both games play with stereotypical heroes. Overall, the game’s narrative is effective and gets the characters where they need to go in an entertaining way. It isn’t an emotional tour de force. Neither are the spaghetti westerns from which Evil West draws inspiration.

Where Jesse goes is on a tour of the American West. There are levels in ghost towns, mines, underground vampire temples, opera houses and oil fields, just to name a few. These aren’t faded, sepia-toned versions of the West, but filled with saturated color. Getting around them is easy. Jesse is very mobile, and there are signposts everywhere showing the way. 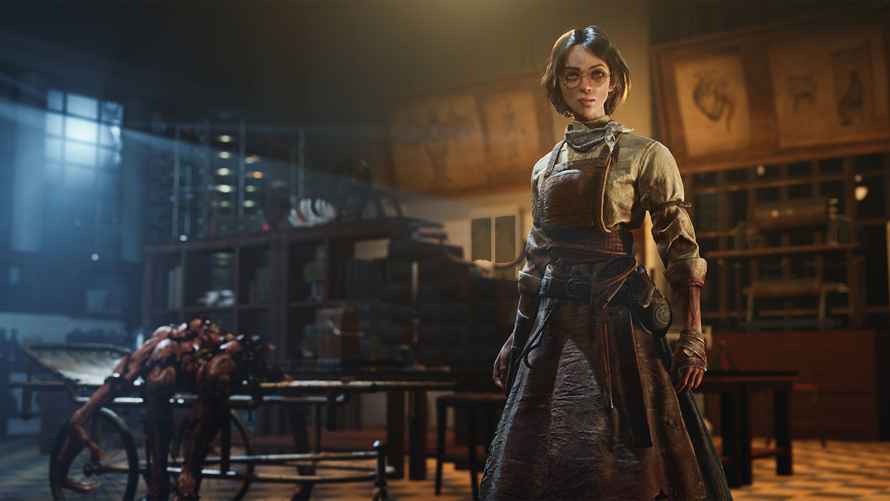 Badass to the Bone

Evil West supports two-player co-op It’s a lot of fun, especially at the game’s higher difficulty settings. On PC, Evil West has a relatively basic assortment of settings for graphics, accessibility and sound. Arachnophobes will appreciate the ability to dial back the number of spiders. Overall, the game ran pretty well on my mid-range PC with everything cranked up to epic and motion blur disabled. There was a bit of framerate stutter as new areas loaded in, but I had no significant issues with bugs, crashes or performance.

Evil West is the third in an unrelated trilogy of games that weave together the old West with supernatural elements. The West has recently been Hard, Weird and now, Evil. To me, this is the best of the bunch. It’s definitely the most fun. It combines an old-school shooter’s lack of fussy complexity with plenty of depth and engaging, fluid, frenetic combat. Add in a well-acted narrative and some iconic environments, and you’re in for a great time slaying vampires and taking names.