When our original review copy for Disney Infinity 3.0 Edition came in I will admit to being disappointed that we didn’t receive the bundle which included the Star Wars: Rise Against the Empire play set. Sure, the Star Wars: Twilight of the Republic play set was fun but I’m old and love to wax nostalgic to the days of my youth. The newer content in the Star Wars universe just doesn’t hit me in the same way the original trilogy does so finally getting to extoll the virtues of said trilogy to my seven year old via this new play set felt really, really good.

If you haven’t figured it out yet, the Rise Against the Empire play set focuses on the beloved original Star Wars trilogy and will have you playing through many familiar situations from the movies. If I were to pick which of the two Star Wars sets was the better one I’d undoubtedly go with Rise Against the Empire. While nostalgia may slightly influence that call it’s mostly due to the fact that the overall gameplay between the two is highly stacked in the original trilogy’s favour.

The trilogy is covered in its entirety (although severely compacted with some variations to shorten things up) and will have players facing the deserts of Tatooine, the forests of Endor and the icy plains of Hoth. The environments themselves being so completely different lends well to the variety within the gameplay. Much the same as Twilight of the Republic you’ll have side quests to accomplish (fetch quests, races, timed challenges) but they essentially serve as an appetizer to the main course of playing through some of the best (abridged) scenes in Star Wars history. Drive a snowspeeder, ride a Tauntaun, complete the Death Star run and win the Battle for Hoth. It’s all there and it’s a great bit of fun.

“A wonderful, if not a bit simple, trip down memory lane that serves as a great jumping off spot for kids to fall in love with the magic of Star Wars’ original trilogy.”

Seeing as this is a game clearly geared towards kids (hence starting out with the Clone Wars material) the game play is remarkably simple. As an old nerd I had fun playing through but was rarely, if ever challenged. Watching my son play through was much more enjoyable for me. The original trilogy came alive for him and impacted him in ways the movies couldn’t. Trust me, I’ve sat him through every movie and he liked them but there’s no doubt they feel dated to a kid. He was also challenged but never frustrated so Disney did well in servicing their desired market.

The play set includes both Luke and Leia but admittedly I’d rather get my Han Solo, Chewie and Boba Fett on so my wallet may get lighter in the near future. Of course this is the bane of any toys-to-life based game as the cost of completion can be astronomical. Still, the characters are so well done that they serve well as collectibles on top of their usefulness in game. 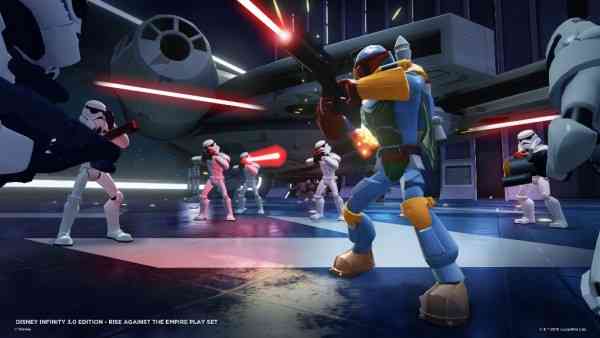 Rise Against the Empire falters in a few spots of course, particularly in its repetitiveness and its ‘collect this before you can do that’ gameplay in spots. Coming up with 2000 credits on Tatooine in order to advance gameplay felt tacked on. Same with the tracking down the credits to build your rebel base on Hoth. I see what they were going for, which was to extend the length of the campaign, but because of the repetitive nature of side quests mentioned above it all becomes rather tedious. But, as a caveat, the seven year old didn’t seem to care in the slightest.

All in all this is a wonderful, if not a bit simple, trip down memory lane that serves as a great jumping off spot for kids to fall in love with the magic of Star Wars’ original trilogy. Despite being slightly repetitive it still serves its market well as the little ones and those young at heart will love it. A good bit of fan service worthy of the cost of admission that only slightly improves upon what was on offer in the original Disney Infinity 3.0 starter pack. 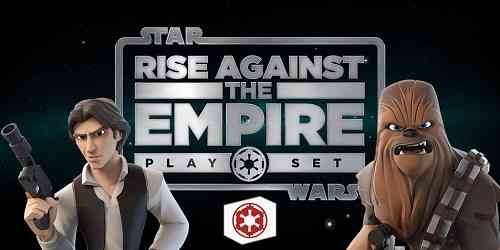