Disney Infinity 3.0 Review – A Little Dose of the Force Goes a Long Way

I didn’t like Disney Infinity 2.0. I saw flashes of opportunity get wasted away in repetitive design, mediocre gameplay and frustrating to understand mechanics in the Toy Box. It was not how I had hoped my beloved Marvel Superheroes would be introduced to the Disney Infinity world. Based on this information you’d understand how skeptical I was at the announcement of Disney Infinity 3.0. Disney, alongside Avalanche Software (with additional help from Studio Gobo, Ninja Theory, Sumo Digital and United Front Games) were putting their puffy white gloves on Star Wars and the only thought I had was “They better not screw this up again.” My biggest worry was a ‘too many cooks can spoil the broth’ type situation with a lot of input from a lot of places equalling a muddy end product. It pleases me to say that my skepticism was misplaced and the newest entry to the Disney Infinity franchise has put the series back on track in a big way.

As a 38 year old man it is tough for me to give an honest review of a game engineered for kids. What better way to get the view of a child than to play with one then? I played both 2.0, and now 3.0 with my 7 year old son. When I say that I disliked 2.0 it was based on the very reasoning that kids would get lost in it. It seemed to me that as a game made to entice the younger set it would be almost impossibly hard for the average youngster to grasp. Sure they could play through (and get bored with) the repetitive playsets but the Toy Box was far too advanced for them. I thought at the time that despite my creative incompetency I might be able to play with my kid and build some fun worlds but it turned out that the Toy Box was even too advanced for me. The end product seemed very niche to the super creative. All this has changed with 3.0 and in the best possible way.

Jumping into the game you get a very short intro into the new gameplay while being introduced to the new franchises joining the fray. You get to use the force with Anakin, do some platforming with Joy from Pixar’s ‘Inside Out’ and you get to race with Mickey and Minnie against an out of control Donald Duck. After playing just this five minute intro I could already see the fun was back in this franchise.

From there you get dropped into the meat of the game, which is a totally redesigned and much more approachable Toy Box Hub. Where 2.0 was confusing and overwhelming, 3.0 creates a central hub where players can speak to hosts and be introduced to Toy Box features at their leisure. My son and I explored the Ewok Village on Endor and raced a land speeder in the deserts of Tatooine all within our first few minutes. We tackled combat with the baddies from Aladdin in the wonderfully grim setting of Halloween Town. As we navigated from host to host I could see his eyes light up as the possibilities presented themselves and the creative gears in his head started turning. This is exactly what Disney Infinity should be. Let’s not forget the option to play Toy Box creations from other players too as that definitely speaks to the longevity of the game as a whole.

“I do think that it may wear thin on adults in time as nostalgia can only take you so far, but it’s a perfect way to get your kids invested in the original Star Wars trilogy!”

For purposes of the review we only had access to the base starter pack so while I can’t comment as to how much fun the Rise Against the Empire playset is I can only assume that it’s way more fun than the included Twilight of the Republic playset. If only for the fact that RAtE is based on the original trilogy and has a Boba Fett character! Still, TotR is a great introduction to the world of Star Wars and while it falls a bit on the short side it’s still a ton of fun. From Geonosis to Coruscant, Tattoine and Naboo there is a great open sandbox to take in. Again, despite me wanting to wrestle the controller away from my kid, I let him do a lot of the gameplay while I took in just how much he was enjoying it as well as just how much he understood it. I loved that he grasped it with ease and only paused a fraction of the number of times had in 2.0 to ask me questions.

The key thing I noticed between messing around in the Toy Box and making my way through the playset is that the variety that 2.0 was missing seems to be present and accounted for in 3.0. You can race, you can fight, you can battle in space and you can platform to your heart’s content. It all adds up to an incredibly engaging game that kids and adults alike can get into. I do think that it may wear thin on adults in time as nostalgia can only take you so far, but it’s a perfect way to get your kids invested in the original Star Wars trilogy! 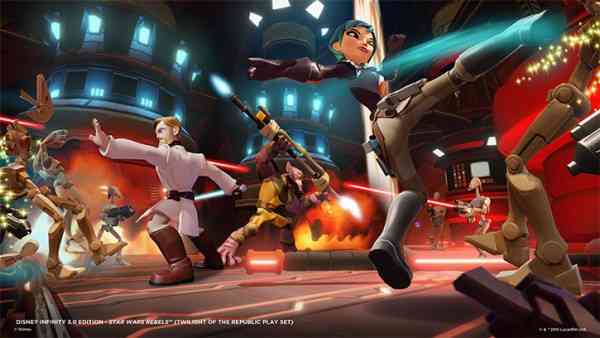 Keeping things fresh of course are the power discs, new characters, extra playsets and expansions available (or soon to be available). Power discs are no longer sold in blind packs instead opting for labelled packs where you know exactly what you’re getting. Characters from Tron to Frozen alongside Mickey and Minnie themselves join the cast too with Pixar’s ‘Inside Out’ getting a playset addition as well. Finally the expansions (Toy Box Takeover and Toy Box Speedway) give players even more ways to play. While I’ve yet to purchase the Speedway I did play it at E3 and I’ll be damned if it didn’t give Mario Kart a run for its money. Controls could use some tightening up but it’ll be a great extra nonetheless.

All in all Disney Infinity 3.0 marks a return to form that was lost from 1.0 to 2.0. It’s nostalgic for the parents while being accessible for the young ones and makes for a perfect ‘play games with your kids’ situation. When you’re marketing some of the most loved IPs of all time it’s a shame to let them go to waste with poor gameplay and Disney hasn’t forgotten this. With all the extras on the way and a wealth of properties to draw on it seems like the House of Mouse has found the direction this series needed that it was entirely lacking before.

Adults could get bored
Controls could be tighter 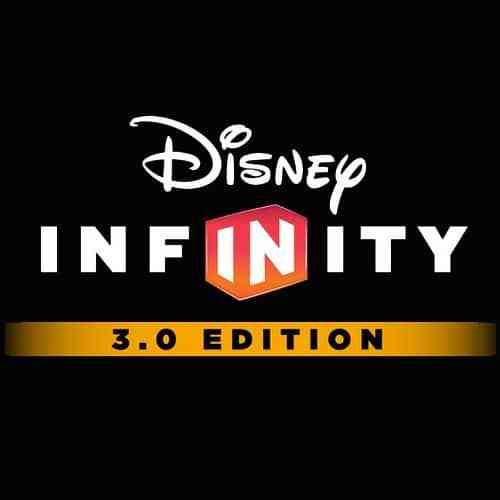 Pick up the HyperX QuadCast S for $45 off During the Last Weekend of Summer
Next Super Mario Maker Review – Building up to Something Good
Previous Nova-111 Review – It’s Solid, Not Super