Super Mario Maker Review – Building up to Something Good

Super Mario Maker is a game that is going to need a bit of different treatment when it comes to a review. I’m going to get right down to the nitty-gritty here and say that creative games like these are amazing, but they can also be awful. Allow me to take a minute to explain what I mean. Much like many other things in life, creative games will only give you as much as you put into them. Dedicated players that are passionate about Mario and level design, and those that get just as much enjoyment out of entertaining others as they do themselves, are absolutely going to love this game. As for everyone else, probably not. As far a general content is concerned, the game is a barren wasteland with almost nothing to do that doesn’t require a user’s creative investment. The game boots up with only two options: play or make. “Make” is where this game earns your money. It’s got droves of tools and elements (although many of them being time-locked) and really lets you make whatever you can dream up. “Play” on the other hand, well if you bought this game to just play Mario levels; you’d have been better off with something else.

Building an amazing Mario level is a great feeling and that feeling is transcribed into Mario Maker. It’s almost every kid who’s grown up since the 80’s dream to be able to make a Mario game of their very own, and now they can. Nintendo has packed Super Mario Maker’s creative mode with loads of content, including a pantheon of baddies, power-ups, and some of Mario’s most iconic environments. Super Mario Maker spans across 4 generations of Mario titles and stays true to each and every one of these eras by keeping each of their unique mechanics in place. Super Mario Bros. 3 style will let you build up your “P” meter and take to the skies, while Super Mario World lets you bust up blocks with your spin jump. 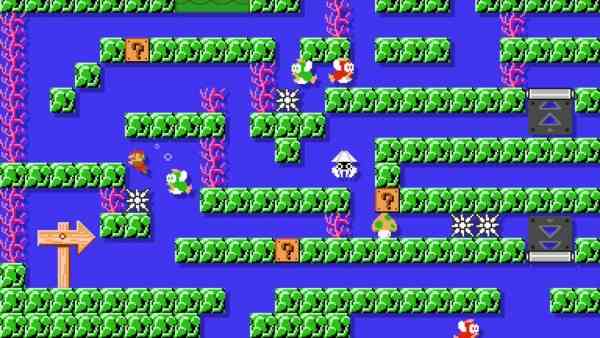 Creating a level in Super Mario Maker is perhaps one of the most obvious, yet intuitive, things I’ve ever seen in a creative title. Your GamePad’s touchscreen is broken up into a grid; each spot on this grid can have something placed on it. Simply tap the item bar on the top of screen, find whatever it is you want to place in your level, and then drag it to its desired location. Viola! Making levels is really that simple. Your touchscreen interface has many other additional tools to help craft your dream level. There are toggles for art style and environment type, a switch in the upper corner to adjust level time limit and screen scroll speed, and a bar along the bottom that lets you lengthen or shorten the size of your level. The right side of the screen features a number of critical tools including your eraser, mass eraser (level reset), undo, save options, and menu options.

A feature for those who have jumped onboard the Amiibo “gotta have them all” train may find interesting is the inclusion of Amiibo functionality. Simply tap an Amiibo character onto your GamePad to have a costume in the likeness of that character be usable in game! Yes, this includes Sonic, Megaman, and Pac-Man. The console wars are over. We have Sonic in a Mario platformer. Players be warned though, this only works in 8-Bit Super Mario mode.

Super Mario Maker is a game that has nearly unlimited potential, but may be slow out of the starting gate. It will take some time for many to get on board…

Once you have a level that you are proud to show off you can upload it for the world to see. People online can play through your creations and tell you what they think when they are done. Creators that design good levels, and earn positive reviews, are rewarded by being more visible within the community. This should theoretically help the better creators rise to the top and discourage people from uploading poor and/or exhaustingly difficult levels, but so far it has done little to discourage the latter issue. I’d like to think that this is due to its relatively small and initial user base, but every other level found online is somebody’s take on “Hardest Mario Level Ever”, which makes finding decent content difficult. The good levels are very good though, but they are far and few between. As a long time gamer, I have to take a moment and comment on some of the creators already who out there who do indeed have impressively creative ideas. I admit that are some darn good levels to be found.

Playing Super Mario Maker can really be broken up into three different ways. The first is to play through your own creations, which as I’m sure most will feel is pretty boring. The second is to play through something called 10 Mario Challenge. 10 Mario Challenge is a series of pre-built Mario levels that must be completed in the span of 10 lives. These levels are professionally made, but are on average much shorter than something you’d find in a main-line Mario title. Each play through of 10 Mario Challenge yields a set of new levels and the experience won’t be the same any two times. Each time one of these preloaded courses is completed, it will be saved to a “sample” database for your later use. The third and final play mode in Super Mario Maker is something known as Course World. This is your online single player mode. Course world provides three ways to search of levels; by Maker, by Course, and a randomized mode called 100 Mario challenge. As you might guess, 100 Mario challenge is the same idea as 10 Mario challenge, only these levels are made by players, and are on average much more challenging.

Most of my comments on the game’s visual appeal have already been covered, but I’ve mentioned nothing of the game’s musical score. The variety is, as you might envision, broad in scope and very nostalgic. Each of the four game styles has a memorable piece attached to each of their different environment types. Plainly put, there is a different song for each of the four castles, and each of the four airships, each of the four caves, etc. To further deepen the level making experience in editing mode, these songs are remixed with new vocals and extra beats added in. Some of these remixes are catchier than the originals! Super Mario Maker also allows for you to record sound bites and incorporate them into your levels. These sounds clips don’t work online though, so you’ll have to have your friends come over to play your level the way it was meant to be heard!

Super Mario Maker is a game that has nearly unlimited potential, but may be slow out of the starting gate. It will take some time for many to get on board, and maybe even longer for the online communities to build up an array of amazing creations; but I don’t have a single doubt that it will happen with time. If you really sit down and take a good long look at the big picture, Super Mario Maker could go down as the greatest Mario game ever made. It bridges Mario across thirty years of platforming, and puts the power in the player’s hands to play Mario how they want. I myself cannot wait to see what the rest of the world has waiting for me to play, and I in turn can’t wait to share my creations with the rest of you. 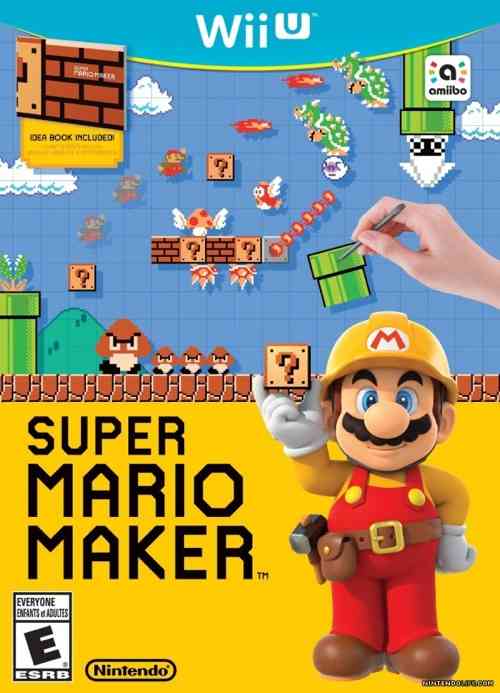