The Cruis’n series is one of the most iconic and beloved arcade racing franchises in gaming, and I was thrilled when the fourth entry was announced for the Nintendo Switch. However, Cruis’n Blast didn’t start off as a Nintendo Switch title, it was originally released as an arcade title back in 2017. Now, four years later, a fully fleshed-out version has found its way to the Nintendo Switch, complete with its classic, over-the-top gameplay and bright visuals. Cruis’n Blast won’t be everyone. If you demand any sense of realism to your racing games – then you’ll be better off looking elsewhere. Cruis’n Blast is a wild experience with minimal regard for authenticity. And I loved every second of it!

Cruis’n Blast is jam-packed with content. The meat of the game comes through the Cruis’n Tour, which is playable solo or locally with up to three other players. The Cruis’n Tour includes four different difficulty settings across 6 different tours. Each tour consists of 4 different tracks and often includes some special theme. For example, the Escape Tour will mix racing with the hot pursuit of police cruisers trying to throw you off your game. The Storm Tour features four tracks with extreme weather conditions hindering your races. In addition to the Cruis’n Tour, you’ll also get access to Classic Arcade, which is a recreation of the actual arcade experience. The tracks are essentially the same as those in Cruis’n Tour, but it’s still a nice addition. Finally, you’ll also have access to Time Trials and Single Races. Overall, you’ll get 29 different tracks to race on.

Cruis’n Blast also includes a vast assortment of vehicles, ranging from licensed vehicles like the Hummer to some really wild vehicles like the hovercraft. You’ll only have a handful of vehicles available when you start, but you’ll eventually be able to unlock more vehicles by finding hidden keys in each track. Each of the vehicles is fully upgradeable, offering both aesthetic and performance improvements. In total, you’ll have access to 23 different vehicles.

Kicking Realism Out the Door

Make no mistake about it, the racing here is designed to be fast and fun with very little regard for authenticity. Double-tapping your gas will make your vehicle pop a wheelie, and if you ram another vehicle while popping a wheelie, you’ll flip right over top of them. Drifting into a jump will make your vehicle spin like a helicopter. Sometimes, set pieces around the track will fly in-front of you, and if the timing is off, you might end up flying right through a massive pirate ship – completely clipping through with no damage or slowdown. Cars feel like bumper cars, smashing off the sides of the tracks and other vehicles like a pinball machine. Sometimes hitting an opponent’s vehicle with just the right amount of force will cause them to explode like a Takedown in the Burnout franchise. This game looks buggy, and even feels buggy at times, but it’s still a rush.

Cruis’n Blast features a robust local multiplayer experience. You can have up to four players via split-screen or on four separate consoles via local play. There are four different modes available in multiplayer. Cruis’n Tour, Classic Arcade, and Single Race play exactly as they do in solo. And then there is the First to Three mode where players keep racing until one player hits three wins. Obviously, online multiplayer will be missed if you don’t have any friends to play against locally. And it would have been nice to see some additional multiplayer modes – but I did appreciate the fact that any progress you make in multiplayer transfers across all modes. 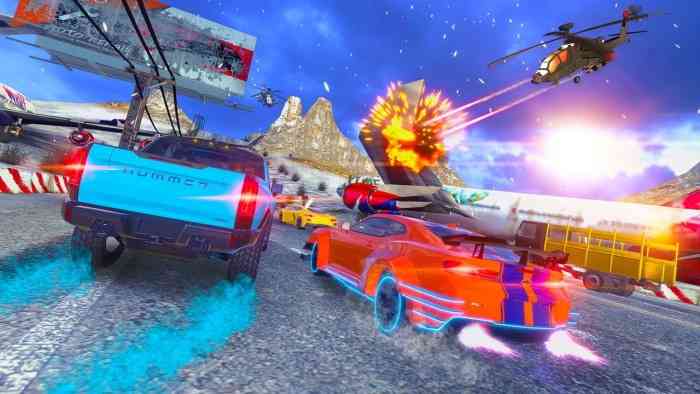 Visually, the game is definitely nowhere near the fidelity of games like the Forza Horizon series. With that said, there are still some impressive moments. Tracks often have crazy, over-the-top features that are activated during certain points of the race. The massive Millenium Wheel is featured in the London track, but about halfway through the race, the wheel becomes dislodged and starts rolling around. In another race, you’ll encounter the largest Yeti you’ve ever seen in a game. Vehicles are often quite colorful and shiny, but if you look close enough, you’ll notice the limitations of the Switch hardware and see jaggies along the edges. Cruis’n Blast will not win any awards for visuals, but honestly, that’s not the point of this game. The game’s soundtrack is a mix of electronic, upbeat tunes. I had no complaints about the soundtrack, there were some tunes that were actually pretty good. You can switch tracks mid-race with the push of a button. However, most of the time, the music is drowned out by the roar of the engines and explosions.

While I’m a huge fan of what is included with Cruis’n Blast, I do wish some additional content was added and I hope developers are considering some future downloadable content. For one, it would have been awesome to have some classic Cruis’n tracks from previous games remastered and available to play here. As it stands now, I’m still having a ton of fun with what’s included, but I anticipate wanting more in the near future.

Cruis’n Blast is arcade racing at its best. Yes, it’s buggy. Vehicles will clip through damn near anything. There is very little realism here. But none of that truly matters. For the 2 minutes you’re racing, it’s just this blur of fast and furious gameplay with wild, over-the-top set pieces and blazing fast speeds. While 29 tracks are included, a handful of those are very similar. I’m really hoping we’ll get a DLC drop at some point with a collection of new tracks and vehicles, just to add some longevity to the overall experience. A lack of online multiplayer doesn’t bother me but could be a downer for others. If you’ve played previous Cruis’n games before, you know what you’re getting into. I had an absolute blast playing Cruis’n Blast and highly recommend it for any speed junkies that need a quick, fun fix on their Switch. 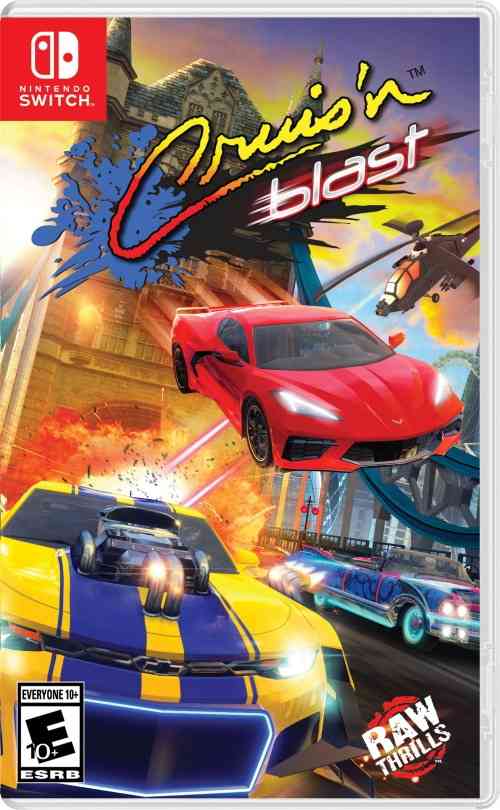