If you’re like me, and had a part-time job as a teenager working in a fast food joint, then… you have very little desire to ever relive the experience. Working hard, for little pay, dunking fries into hot grease isn’t exactly a ton of fun — or is it? Clash of Chefs, now on VR, is the latest video game attempt to turn the drudgery of short-order cookery into an enjoyable game.

The basics of Clash of Chefs are simple; placed in four different styles of restaurant — American fast food, Italian, Japaneses, and Mexican — you fill customer food orders by following visual guides, assembling each dish as quickly as possible and placing it on the counter where a waiter whisks it off to waiting tables. Your speed and accuracy determine the number of points you get, and there are 20 levels for each of the four restaurants to work through.

The simplicity of Clash of Chefs is a strength. There is no long Tutorial; you’re just thrown into the job, and the visual instructions are clear. All of your ingredients are around you, and they’re visually well-defined so that you know right away, for example, which one is the ball of pizza dough and that you’re supposed to flatten it out with your hands. Everything is very intuitive and straightforward, so that within 5 minutes of starting Clash of Chefs for the very first time, I was well into the second level and flailing my arms around like a madman (and getting a good workout). 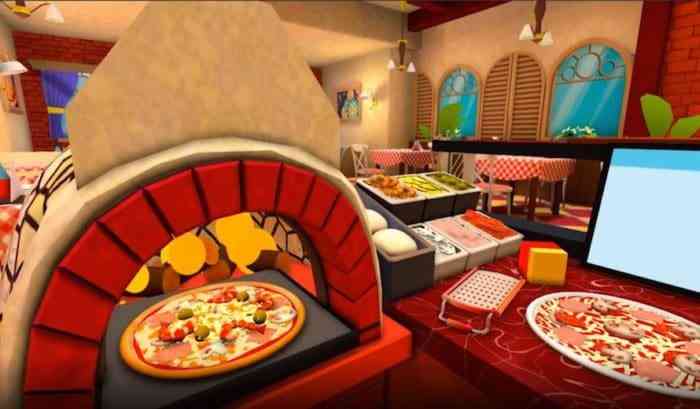 Physically, Clash of Chefs makes good use of VR’s 360-degree capabilities. Part of the challenge is swiveling side to side, looking for ingredients and keeping track of all your many cooking items. You’ve got to do lots of different things with your body — sometimes picking up a ladle, sometimes grabbing a plate, and other times chopping with a knife. The physics can get sticky, though, and it’s a big downer when an item falls out of your hand, or takes a long time to grab. Clash of Chefs does a decent job, though, with this overall.

But as you can imagine, things get hectic, quickly. There’s a fast ramp-up in difficulty, right in the first levels, as new orders pile up and you’ve got to watch multiple items at once. I burnt many hamburger patties by forgetting to remove them in time. And I found the Japanese restaurant to be particularly challenging, asking you to do some pretty complex culinary arts that made me sweat a lot more than I did assembling simple hamburgers.

Where Clash of Chefs disappoints, though, is in the lack of variety in gameplay and game modes. I would have liked to see more elements added to the basic cooking experience to deepen the fun — maybe a financial aspect in which you make more profit the more satisfied your customers are, and you could then invest that profit into upgrading your kitchen, and so on. Clash of Chefs felt like it needed “more” to keep me coming back, as the repetitive and one-note nature of the gameplay just wouldn’t be something I’d return to after one playthrough.

There are online modes that could have filled this void somewhat. For example, there’s a Leaderboard offering the chance to compete against other humans to get the best score. That’s not bad. But I was disappointed that the PvP mode, a chance to directly compete with others in real time, never seemed to be able to match me up with someone else. This is a problem I’ve seen with other lesser-known games; there just aren’t enough other players at any given time to make this work. That is certainly not the fault of the developers but it’s a major disappointment nevertheless.

Clash of Chefs is a simple game and that’s just fine; its cute colorful visuals get the job done even if they’re not stunning, and the minimalist presentation has its charms. There’s nothing overtly “wrong” with this game and for a short, casual play session, there’s some fun to be had. But, much like the empty calories of eating a hamburger and fries, you’ll be wanting something a little but more substantial after too long.