City of Brass is an odd beast. I’ve never played anything quite like it. Well, strictly speaking, that’s not true. It’s a procedurally generated dungeon crawler, with purchasable upgrades and an experience point system that persists between runs. It’s also a first-person melee game all about killing Arabian Nights themed monsters with a sword and whip. Somehow by cobbling together a bunch of different genre staples, City of Brass creates something totally new.

You begin every run at the outskirts of the titular city. The layout is different every time but its filled with traps, enemies, and treasures. You also will encounter genies (or djinn or you prefer) who will sell you various upgrades. You can purchase new weapons, armor, spells, fighting companions, and other more secret bonuses. You can also heal yourself, which you will definitely need to do, because City of Brass is way hard, and your health is extremely limited.

Since the main way you interact with the world is with your whip and your sword, how they control is very important. Fortunately, the melee combat system in City of Brass works very well. When it comes to the first-person melee style, I’m something of a skeptic. It works passably well in the Elder Scrolls games, and I have a soft spot for Jedi Knight II: Jedi Outcast but beyond those examples, I’m hard-pressed to think of another melee combat system that works well from the perspective. The whip is sort of ingenious. You can crack it at an enemy’s head to stun them, or at their feet to trip them. You can lasso enemies and pull them around, preferably into deadly traps. You can also use it to snag out-of-reach treasure or to trigger certain booby traps. Eventually, you will also use it to grab hooks and swing yourself around for a huge boost in mobility.

A procedurally generated first-person game also could run into the problem of losing its player in a labyrinth. Fortunately, you always have a compass pointing you towards the exit. It’s less obtrusive than the sorts of radar assistance you may have seen in open world games. Just because you know the direction you need to go in doesn’t mean you will live to reach the exit. There’s also always the hope that you will find cool bonuses and treasures off the beaten path, much of which you will need to survive the later levels. The pathfinding was never a problem for me. 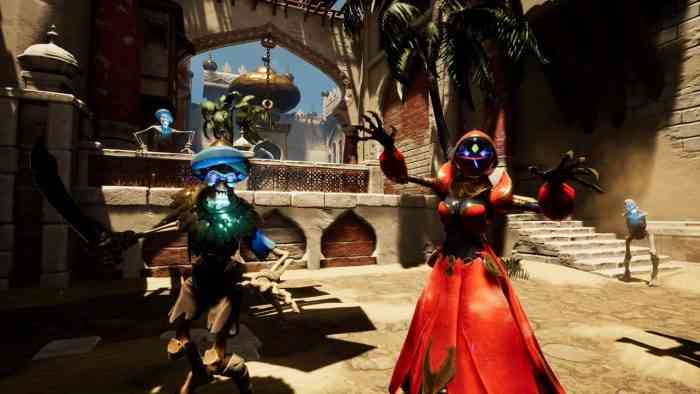 The look and sound of City of Brass are also very important, but it’s there that the cracks start to show at the edges. The sound is very, very important to survival. Since your perspective is fixed, you need to constantly be listening for cues. An evil laugh, a footstep, these may be the only hints that you’re about to be ambushed from behind. This was the closest I came to feeling that the game was unfair. It would be nice for some indication that all your progress is about to be erased by a charging zombie in a  way that won’t be totally canceled by the cat yowling or the dishwasher chugging along. It can be really brutal.

I have no complaints about the graphics or style. I will admit that I secretly love Arabian Nights themed stuff (blame it on my first movie in a theater being Aladdin) and it gets used far too little in games. That’s where the real problems occur though. Even though the layout is always different, the city always looks pretty much the same. In a simple top-down arcade style game, that feels like less of a problem, but in a fully 3D environment, you have the expectation of some sort of spectacle. As it stands, each of the rooms and courtyards starts to look basically the same. The monotony of the visuals doesn’t harm the gameplay in any way, but it sort of discouraged me from clocking the serious hours I could have.

Ultimately, that was the curious thing that was missing from the game. I love procedural dungeon crawlers. I’ve played more of The Binding of Isaac than I’d care to admit. Ditto for underrated PC gem UnExplored. When it came to City of Brass though I wasn’t compelled to come back again and again. Maybe it had to do with the lack of milestones. Playing a run gets you XP which earns you new bonuses and challenges, but the simplicity of the system wasn’t all that compelling to me. Maybe it was the limited combinations of systems and obstacles. You know that on the third level, you will start facing the hidden pits that drop you into spikes. It’s the same every time.

Overall, City of Brass is a huge achievement in design. It tries to combine elements that have never been put together before. It also largely succeeds. Gameplay and controls work great, and while the challenge is way on the hard end of things, it never feels like its because of bad design. If the game clicks with you, it would be easy to lose yourself to the game for hours. In the scheme of history though, City of Brass will probably be best remembered as a game that dared to go to brave new places, and inspired many games to come.