Book of Demons is an isometric deck-building hack ’n’ slash with RPG elements built around a beautiful art style that resembles paper cut-outs. Set in the Paperverse, this game is meant to be the first of seven out of Polish studio Thing Trunk – a series meant to bring new fans to the traditionally hardcore and inaccessible genre of hack ’n’ slash genre. If Book of Demons is how the series starts, the rest of the Paperverse looks plenty promising.

You play, initially, as an Aragorn-esque warrior, although you can switch to a Tauriel-esque archer or Morpheus-esque mage later on. You can name him, but you can’t change him in any other way, which I was a little bit disappointed by, but the charming art, good dialogue, and fun characters of the little town the player character starts in drew me in any way. Between the Barmaid, the Fortune Teller, the Sage, and the Healer, all four of which serve important gameplay functions, there were lots of cute and interesting interactions to be had throughout the game.

Of course, the most important aspect is the dungeon itself. Book of Demons has an extremely unique and useful “Flexiscope” system, which allows the player to choose how long they want to play. As someone who likes to play games on my lunch breaks but is always terrified of running over, this is an extremely welcome feature, and I utilized it more than once to decide how long I wanted to stick around.

The times range from about ten minutes to an hour, and they show how far you progress in the overall dungeon, as well. The player can also see where missing items are when they’re trying to clear the level, which is very nice and helps streamline the process to ensure players don’t get bogged down in the details. It’s great design. In the dungeon, the player character fights a variety of different fantasy staples, all with humorous twists on their original tropes. It’s nice that the game is so tongue-and-cheek—many games have died on the cross of taking themselves too seriously, and Book of Demons is delightfully self-aware.

The main mechanics of the gameplay revolves around a deck-building system where the player character unlocks and upgrades different cards, which can be used for attacks, defense, or passive abilities, all to be swapped out at will. The passive abilities use mana, and it is quite important to balance your mana between passive-holding abilities that can make or break the game and leaving enough for the attacks you’ve got equipped. It’s a fun, useful system that takes some skill to manage, and I found it to be one of the many highlights of the game. 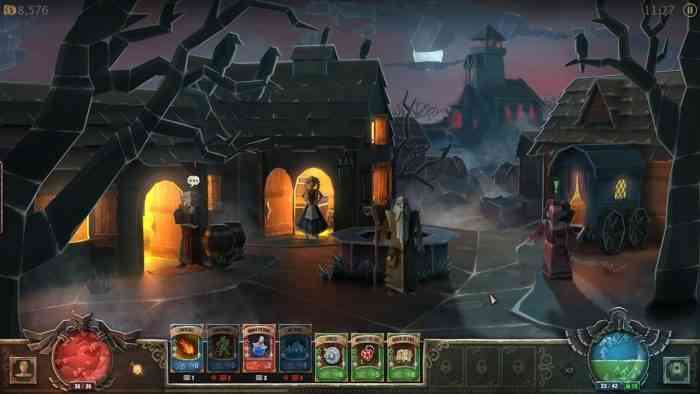 The major downfall of Book of Demons is, unfortunately, the gameplay. Playing the game for the short chunks of time designated by the Flexiscope worked really well, but when you pick one of the longer sections, it can get a bit dull. All of the different types of enemies—goats, ghosts, demons, etc.—have different abilities and tricks to killing them, but oftentimes it boils down to something that just makes them take longer to kill. On more than one occasion, I found myself hacking and slashing for much longer than was fun, and I just wanted to complete the level. However, sometimes I had explosively fun rounds against various (comedically-named) bosses, ones that it was incredibly satisfying to beat. It really depends on which enemies you’re up against—the ones that take forever to kill just aren’t my cup of tea.

I did also want more RPG qualities. The fun characters in town mostly serve as narrative devices for gameplay functions, and while they have good dialogue, I thought the antagonism and rivalry between some of them to be a bit forced and hammed up. I wouldn’t have noticed these qualities, and the inability to really customize your character, if RPG elements hadn’t been advertised. Unfortunately, once brought to my attention, it doesn’t really hold up there.

I’ve touched on the art style, but it really is gorgeous and unique, with paper outlines and great visuals. This, combined with the Flexisphere, which understands the limitations of modern gamers’ time better than any game I’ve seen, and with its streamlined mechanics and entertaining deck-building system, Book of Demons is definitely worth checking out. It’s got a few issues to work on, sure, but that’s what the next six games in the Paperverse are for, right?