Beholder was a totalitarian simulator that had some good ideas but failed to deliver in the gameplay department. Beholder 2 plays like a do-over, with a long checklist of improvements that – with all credit to Warm Lamp Games – add up to a decent step-up from the original even if it still leaves some aspects to be desired.

Instead of Carl the landlord, in Beholder 2 you play as a completely new protagonist named Evan Redgrave, and you’ve got to unravel the mystery of why your father took his own life while working at the Ministry. There’s a lot more sense of narrative structure this time around, and that’s a welcome change from the first title. Main story objectives are usually clearly marked, and I felt a lot less confusion as to what I was supposed to do next. Beholder 2 certainly feels more like a finished game experience than its predecessor.

All Hail the Supreme Leader

More than the first game, Beholder 2 succeeds in creating a truly strange brew of the absurdity, dark humor and nauseating terror of life in a totalitarian society. Interactions with lots of quirky characters await you, from the malevolent to the oblivious to the love-sick, but it can all be interrupted by an out-of-the-blue public execution on any given workday morning. There’s an odd and unsettling melange of satirical humor and brutal horror in Beholder 2, and it works more often than not, making the experience decidedly more effective than the original Beholder ever was.

Beholder’s world was small, confining. Its 2.5D environment of a dismal apartment block became tedious to inhabit after a while. Beholder 2 wisely moves the setting to a more expansive realm – the labyrinthine bureaucracy of the ‘Ministry’ – and it definitely feels bigger and more interesting. Now frankly, that’s largely a skillful trick by the developers; most of the backgrounds and extra spaces are blocked off to you, and you’re still limited to a single layer of left/right directional options on every level of the building. But the illusion is effective in giving you the feeling that this is more of an open world than you’ve seen before.

I was glad to see that the cruel, stressful countdown clock on every task has been removed. In Beholder 2, you now have days that wind down, with each task taking a preset amount of time to complete. Checking a vending machine might take 15 minutes, while other tasks like working your shift as a government employee might take a few hours. I found it added a new open-ended aspect to the game where I had to choose how to use my time each day, rather than worrying about missing an objective if I didn’t complete it in time. 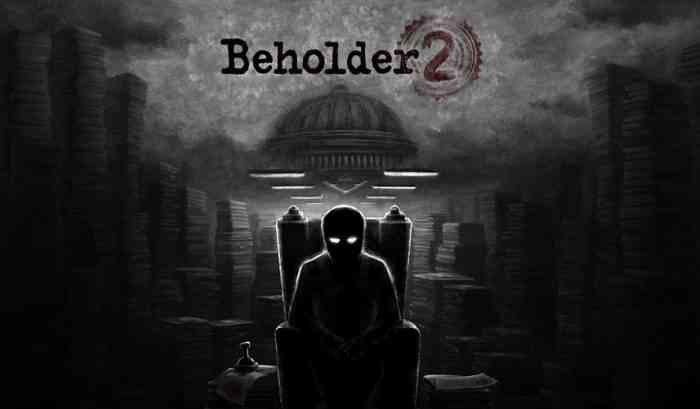 Visually, there might be more going on on the screen but Beholder 2 is still not the prettiest game. Characters are still those ugly black silhouettes with weird stubby legs from the first game, and colors are still dull and depressing greys, blacks and browns. But while I always suspected the minimal visual palette was a cover for limited budgetary resources, at least Beholder 2 gives you more to look at than the first game did.

But let’s cut to the chase: it all comes down to whether a game is fun to play or not. Beholder was mostly not fun – it felt a little too bleak, like living in a real totalitarian society. To its credit, Beholder 2 is a substantial improvement in the fun department – the enjoyable Papers Please-esque mini-game in which you evaluate client cases as your day-job, the interesting side-missions, and the quest to find the truth behind your dad’s demise all add up to an experience that’s a big step-up from the last iteration. I am still not sure that I want to stay in this world for long, though. Evan Redgrave’s life, much like Carl Stein’s, is still a bit too sombre and dull to capture my imagination for an extended period.

In the end, Beholder 2 might not be able to compete with the big AAA titles out there in the visual and depth departments, but it is a solid sequel to the original. Kudos to the developers for listening to criticism and addressing a lot of the shortcomings of the original Beholder. Beholder 2 is a pretty fun experience that gives you lots to do and look at, all while simulating the horror of a totalitarian existence with a nice balance of humor and seriousness. Could it look better? Sure – but as they say, beauty is in the eye of the … something something …


Beholder: Complete Edition Review – They Are Who We Thought They Were

Spy For The State Once Again With Beholder 2 Next Year