A lot of games reach for that arcade feel, with varying degrees of success. There’s an ephemeral quality you need, a delicate balance of frustrating, captivating, and fun. Battle Axe has utterly nailed the arcade feeling to the wall. Believe me when I say that nothing I’ve played in the last decade has captured this quality quite so well as this game. While this isn’t a perfect game by any means, it is the perfect arcade experience. All the breathless highs and crushing lows of playing games in some noisy entertainment emporium is fully contained within Battle Axe.

It turns out that quintessential ‘arcade-ness’ is made up of a lot of little things. The voiceovers are jagged, compressed, and barely intelligible. An announcer proclaims your predicament every time you pick up an item or run low on health. The gems you acquire only add to your high score. Whole chickens replenish a single point of your health. The controls require frantic, constant, precision button mashing. And most importantly, the music and graphics feel like they’re ripped right out of the early 90’s.

So Much Smooth, Satisfying Animation

The quality of the pixel art can’t be overstated. Henk Nieborg is one of the best in the business, and it shows. Every screen is a work of art, one brought to life by fluid movement and exquisite detail. Your character, the enemies, the effects, the backgrounds, and the objects are all pure pixel art perfection. The way the druid’s whole body folds up for every blast from his staff is mesmerizing. Watching the ranger flow like a river from target to target has equal hypnotic power. If it wasn’t so dangerous, I’d be constantly stopping to watch these fighters do their thing. Every motion encourages careful observation. 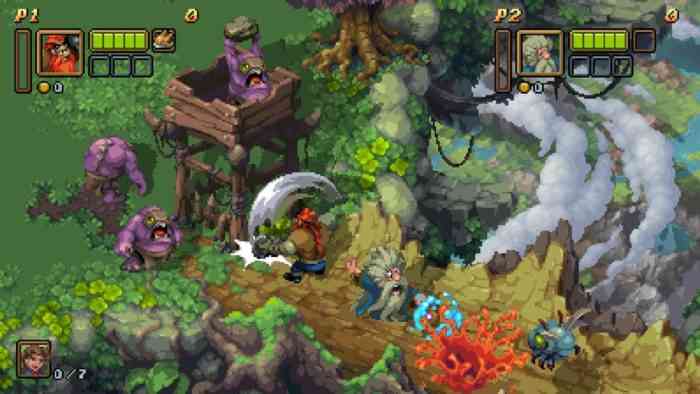 But yeah, definitely don’t do that. Another element of pure ‘arcade-ness’ is the difficulty level. If Battle Axe had debuted in cabinet form it would have been a serious token-taker. Which is totally fine! All those repeated attempts are just a chance to practice up and perfect your strategy. Thankfully, the runs move pretty fast. If you’re quick, you can get through the first two stages in less than ten minutes. Which is good, because I saw those early levels a lot. Also, since this isn’t any kind of roguelike (somehow!), you can memorize your route. Every pass is an opportunity to master the steps, to do better each time.

Items are both uncommon and limited in their utility. A bomb, scroll, or potion can get you out of a single jam, but your developing skills do all the real legwork. Surviving each stage without losing a life becomes critical, as you’re healed between stages. Failing do so can be catastrophic, especially if the next stage is unknown territory. Simply put, the item system serves only to reinforce the importance of your skill in battle. The magic scrolls are wicked fun to detonate, though.

“Rooney Has Found Some Chicken!”

While the item system is almost an afterthought, your character selection is critical. Each of the three fighters use their own distinct combat style. Rooney the Marauder, who carries a cannon around like other people hold rifles, just felt right to me. None of them feel unusable or inferior, Rooney just lets you run and shoot at the same time, which I approve of. The only one with any kind of serious flaw is Fae the Elf, whose projectile speed is dependent on whether you hit the target. More incentive for you to never miss, you know?

Battle Axe might be an excellent arcade game, but that’s a flaw as well as a feature. Extended play sessions, like those you find in Infinite Mode, can quickly wear out their welcome. You can only blow apart so many orcs before you start yearning for more. Maybe the gameplay loop doesn’t escape that cabinets and coins territory, but it doesn’t need to. The action that’s available is nothing short of exemplary. Fluid pixel art animation, tight controls, retro music and audio, and an intense challenge all elevate this game beyond ordinary nostalgia. If you’re looking for your next arcade game, you absolutely can’t miss Battle Axe. 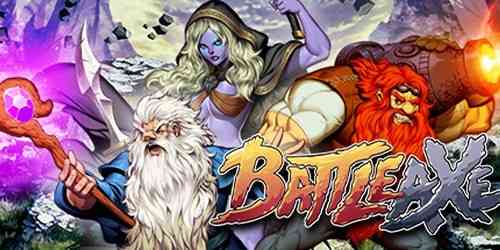 88 Heroes, the Non-Stop Pixel Action Adventure, is Coming to Switch
Next A Game of Thrones: The Board Game – A Dance With Dragons Review – Paying the Iron Price
Previous NieR Replicant ver.1.22474487139… Review – NieR-ly Perfect