Self-described as an “interplanetary action RPG adventure with a rich, choice-driven story,” Batora: Lost Haven definitely checks the boxes that it sets out for itself. With the style of gameplay that it employs (isometric fast-paced action), Batora was right up my alley in terms of what my gaming appetite had been craving, especially as it was a single-player experience. What I consumed was a title that was fun, though perhaps had a bit of an identity crisis at times.

Players take on the role of Avril, living on a devastated Earth. Due to a series of events that occur early in the game, she soon takes on the role of a hero journeying throughout the galaxy in order to save her home planet. As generic as the story starts out, there are some interesting lore aspects to it that get uncovered down the line. Where the narrative missed the mark, however, was the dialogue throughout the game. Think “cheesy B-movie lines” or “children’s television shows” and you pretty much understand the way Avril speaks. What was appreciated though was the branching story with multiple endings, a feature that seems to have waned in recent years.

At the core of Batora is its gameplay, and namely its combat. The primary gameplay mechanic is a polarity-switching skill that allows Avril to switch between the powers of Sun and Moon. This affects her ability to deal more damage to specific enemies or to solve environmental challenges. Overall, the gameplay was as advertised, fast-paced and multi-layered. 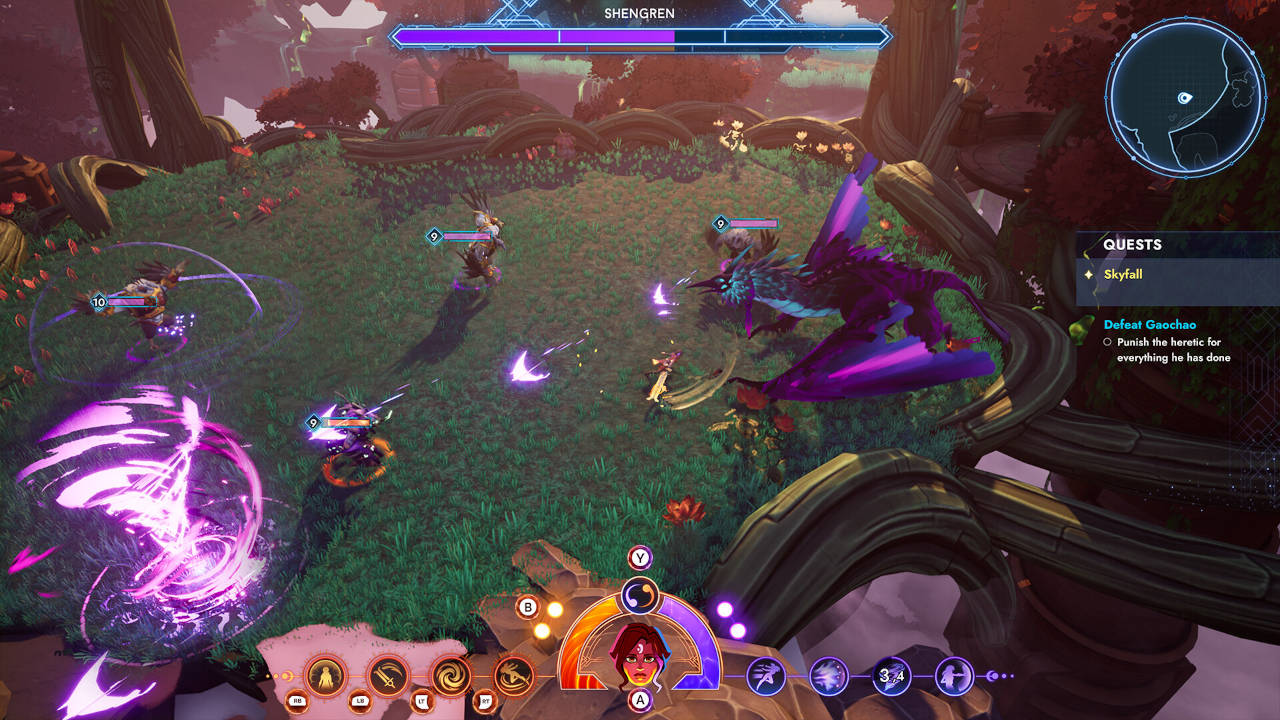 Unfortunately, I found the controls to be a bit conflicting. Attacks were spread between button presses as well as the right thumbstick. I thought it would make sense to have Sun powers mapped to buttons, while the Moon powers would be mapped to the right thumbstick. as a ranged style. You know, like a twin-stick shooter. Instead, the game decided to have different abilities mapped to both buttons and sticks. In terms of the RPG portion of “action RPG”, Batora features a statistics-heavy character menu and rune system with which to enhance Avril’s strengths.

This brings me to my next point regarding my earlier comment about Batora’s identity crisis. With the dialogue and the art style (which we will get to later), Batora seems perfect for a younger audience. However, the relatively complex controls and statistics-heavy screens appear to point in the opposite direction. While the game leans on its gameplay heavily, skewing towards a more specific audience likely would have been better for both the game and the gamers playing it.

While the art style of the characters feels familiar, it falls towards a comfortable familiarity rather than being generic. The graphics work well for the game, as the characters are typically not too close up aside from conversations and the focus is on the action. Where the game’s style does shine, however, is in the variety of alien landscapes. Though some areas are blander than others, there is a wide enough variety of biomes to keep things interesting.

Overall, Batora: Lost Haven is a fun game, albeit with a few shortcomings. The dialogue and the cartoonish visuals appeal to a younger audience. Meanwhile, the detailed statistics and complex controls make it feel more mature. Are you a fan of sci-fi action games or isometric action RPGs in general? Then Batora: Lost Haven could be a worthwhile game to sink your teeth into.

** A PC code was provided by the publisher **