Triangle Strategy puts the strategy in strategy RPG. Its setting is gorgeously realized, its worldbuilding is excellent, and its characters are messy and complex in the best way. The game avoids putting all its eggs in one basket by also containing some intricate and often grueling combat. Both these sides of the title are woven together by the urgency of its plot and the uncertainty of what your decisions will cost. Unfortunately, that doesn’t keep the seams between gameplay and narrative from showing.

The continent of Norzelia is split between three nations, each of which dominates a vital resource. Glenbrook controls the river trade routes. Aesfrost controls the continent’s iron. And Hyzante controls the salt supply. Thirty years ago, the nations clashed in a bloody war over these limited resources. Now, as Serenoa Wolffort of Glenbrook prepares for his arranged marriage, the conflict is about to begin anew.

Serenoa is accompanied by three close advisors. His family’s cold and pragmatic steward, Benedict. His carefree and idealistic prince and childhood friend, Roland. And his withdrawn and intellectual fiancé, Frederica. Each contributes different techniques in battle and different options during the narrative. However, as things go from bad to worse in Norzelia, it becomes clear that they have very different priorities. You can only balance Utility, Morality, and Liberty for so long. Eventually, something has to give… doesn’t it?

Triangle Strategy is what we would call a narrative-driven game. That means it has incredibly fleshed-out characters that like to talk a lot, on and off the battlefield. As mentioned in our previous Triangle Strategy review, there’s as much emphasis on conversation as there is on battle. And the choices you make during those conversations will come back to haunt you. 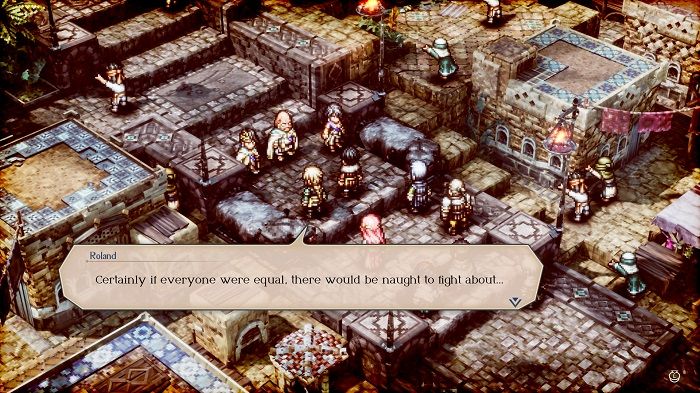 It’s not always easy to tell where a choice will lead. What seems to be a noncommittal response can end up adding unexpected layers to Serenoa. A decision that seems tough but necessary may end up causing the catastrophe you were trying to avoid. Norzelia and its people are full of life, and that life can’t always be predicted. One person’s prized ideals may be the death of someone else’s hopes and dreams. It’s easy to see how the continent has ended up at war over and over again.

Triangle Strategy looks and sounds gorgeous. The game features lush sprites, 3D backgrounds, and modern visual effects. It harkens back to the era of detailed pixel art and retro sprites while incorporating modern advances. It’s pretty awesome. The voice acting is pretty solid, though I found the supporting cast more engaging to listen to than the main cast. I would’ve liked a bit more emotion out of the voice cast. They often sounded like they were suppressing their feelings. This could make it hard to tell what they were supposed to be feeling at any given time.

Triangle Strategy is Game of Thrones as a JRPG

This game reminds me of Digimon Survive in many ways. Namely, they’re both strategy RPGs with a major focus on plot and storytelling, even if that means lengthy cutscenes. They also both feature a choice system that quietly changes the game depending on which of three unseen stats you favor. And they’re both pretty dark, although in different ways. The primary difference aside from the aesthetic is that Triangle Strategy put a lot of effort into its battle system. If you crave good, complex, and often grueling strategy RPGs, this one is for you. 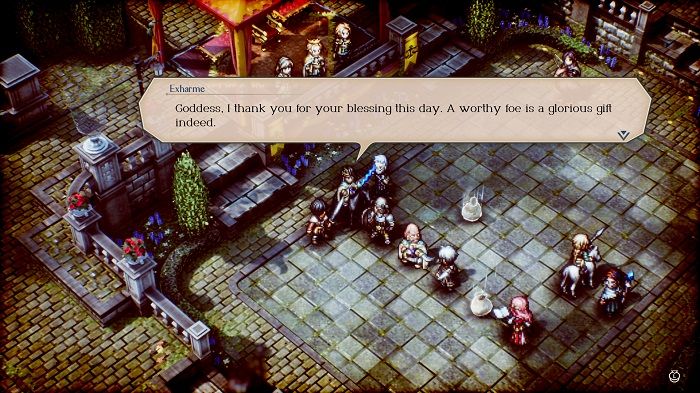 That said, the game’s pacing is… sluggish. Some side missions are entirely cutscene. Some main story missions are entirely cutscene. There’s a metric tone of build-up for everything, and I don’t think it’s always necessary. I often found myself trying to guess if a given mission would be interactive or not. If you have a low tolerance for slow-building political intrigue and the complex relationships of a massive cast of characters, this is not the game for you. Strategy RPGs often feature large casts and intricate plots, but Triangle Strategy takes this to a new level. There’s so much story content in this game you’ll need to play it at least four times to see everything.

It feels a bit like someone tried to stuff all the sociological complexity and politicking of Game of Thrones into a JRPG. The result is fascinating even when it doesn’t quite work. I definitely felt the lack of battles, though. Exploration phases did not make up for it.

This is a strategy RPG, and when the combat does come into the picture, it’s awesome. Positioning and turn order are key, but there are a few other things to keep in mind. Attacks from higher ground do extra damage and back attacks are guaranteed criticals. Some characters have abilities that can affect turn order. You will love and respect these characters. They are miracle workers. Also, the decision to make item drops appear on the battlefield for anyone to grab is inspired. I’m not sure if I love it or hate it, but it sure does add an extra layer of complication. 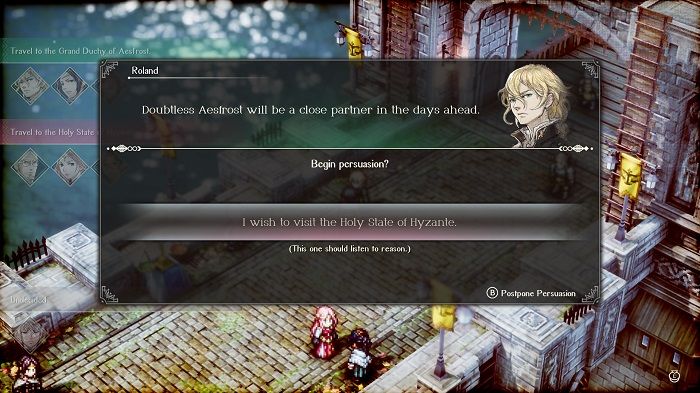 You advance the story, enter battles, and use the Scales of Conviction by selecting event markers on the world map. Some events are part of the main story, others are optional and will disappear as that story progresses. The game is divided into battles, cutscenes, and exploration phases. Each add new opportunities to learn about the characters and the world. Also, nobody ever shuts up during any of these segments.

The game and Norzelia itself have three guiding principles: Unity, Morality, and Liberty. Serenoa’s decisions determine his convictions and which characters he can recruit. Eventually, you must decide which principles to pursue and which to reject. This concept unifies everything in Triangle Strategy and I love how deep the theming goes. 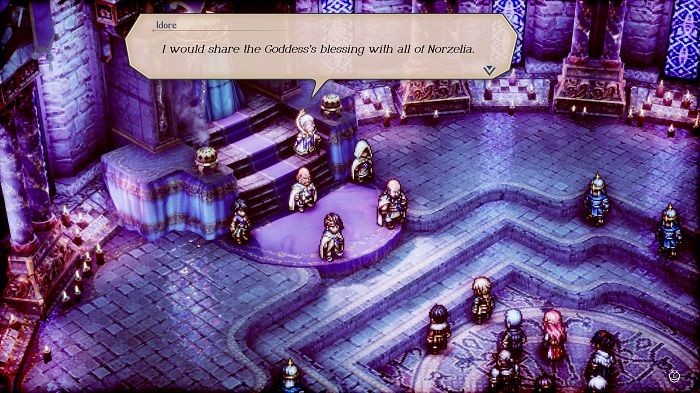 At its core, Triangle Strategy is a tale about the dangers of extremism. It paints a grisly picture of greed, selfishness, and horrors committed in the name of Unity, Morality, and Liberty. However, it also offers up the hope that the cycle of violence can be ended. Bringing true peace and understanding to Norzelia won’t be easy, but it is possible. 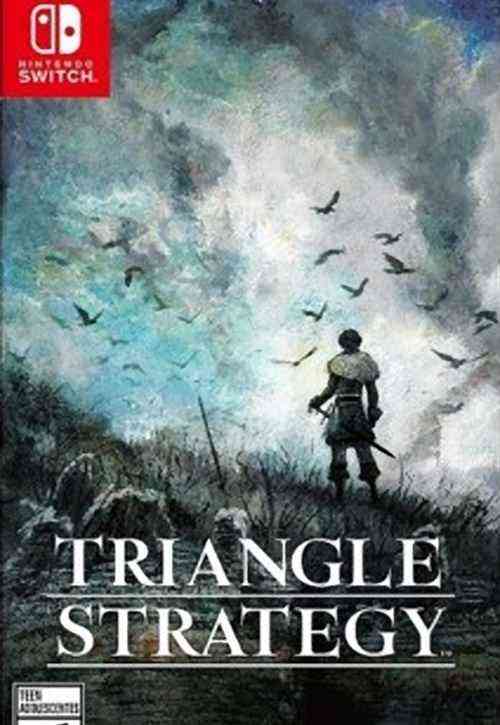