AWAY: The Survival Series Review – An Arduous Trek

AWAY: The Survival Series Review

Presented as an animal life documentary, AWAY: The Survival Series aims to educate whilst telling a story about family, hope and perseverance. With a family of adorable sugar gliders at the forefront, Breaking Walls looks to break new ground in this environmental adventure.

David Attenborough is synonymous with wild-life documentaries. His mannerisms and demeanor are etched into the very fabric of the genre, resonating with animal fanatics worldwide. Although AWAY: The Survival Series doesn’t include the voice work of the legend himself, they have used a similar-sounding actor to narrate the entirety of the game, helping to blur the lines between a video game and a documentary.

As a cute marsupial, you must learn the way of the land from your parents in order to survive. Edible vegetation and small creatures are littered throughout. You will be required to gobble these up in order to increase your health and stamina. Whilst this gives deeper insight into the struggles of survival, it quickly becomes a chore. After a series of unfortunate events, you are left alone, having to fend for yourself. With your mother and sister held captive, you must venture through a perilous world to be reunited with your family. 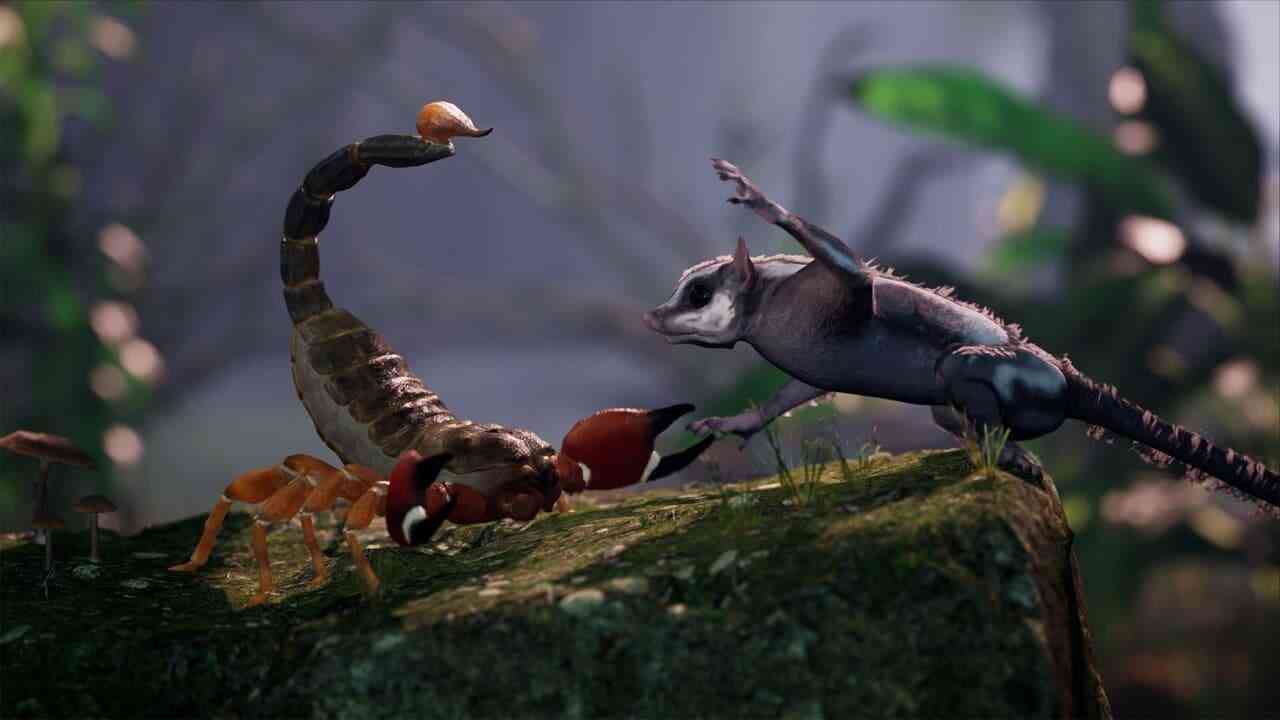 Traversal is at the core of AWAY: The Survival Series. As a sugar glider, you can skitter up trees, dive onto ledges and glide over the luscious terrain. Unfortunately, the mechanics hinder what should have been a peaceful trek through the wild. At times you can soar, gracefully through the sky, however, at other points, for no apparent reason, you won’t gain any momentum leaving you a splattered mess on the dirt floor. Jumping feels unnatural due to the sheer height that the joey can ascend and the lack of weight, however, you can jump from obstacle to obstacle by aiming at your desired location, holding the trigger and pressing the indicated button. Mixed with climbing across branches and floating to shrubbery, wandering through the environment is mostly enjoyable, especially in linear segments. Open areas can be quite frustrating. Without the meticulously planned routes, issues arise with the mechanics. As you search for the glowing fungus that indicates your path, climbing and jumping become troublesome, lacking the accuracy of the linear sequences.

Arachnids and other creatures are dotted throughout. Some will attack, whereas others scuttle away. Combat is by far the worst element of the game. The animation when striking enemies is laughable, instantly removing any sense of realism. At particular points, you’ll fight against larger foes, but the problems are only accentuated at these segments. Here, you must roll out of the way of attacks and then quickly counter, however, without the ability to target enemies, the extremely zoomed-in camera angle and the unresponsive controls, this becomes an infuriating task.

Foxes and other larger animals stalk the terrain requiring you to stealth through areas. Using the instinct ability, you will be able to identify the position of animals to determine whether it is safe to make the life-threatening leap from one point of cover to another. Alas, the instinct ability is tied to a meter, requiring you to wait for it to refill so you can survey your surroundings. This means you’ll be spending time sitting in a bush, waiting for the ability to recharge slowing the game to a snail’s pace. 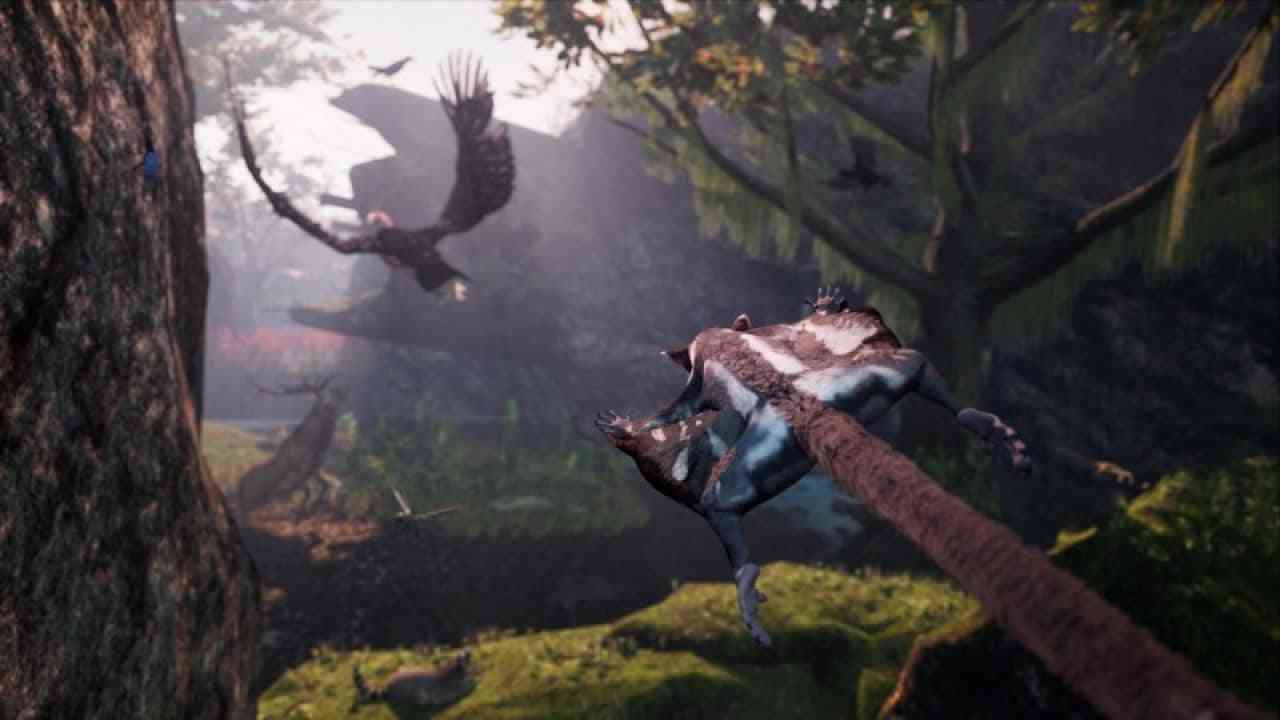 Adding to the cinematic feel of the game, automated segments also occur to progress the narrative. As the sugar glider progress through dangerous situations, you will need to complete simple quick-time events to ensure his safety. Whilst this helps to diversify the gameplay, I would have liked tougher sequences to replicate the struggles of the protagonist. Side missions are also available in the game and can be accessed via the map. These are mainly collectibles that add to the lore of the world. In addition to this, you can step away from the story mode and switch to exploration at any time. In this mode, you can control and switch to other creatures to explore an open world.

Whilst the environment is beautiful with overgrown plantlife contrasting against man-made structures, technical issues break the immersion. The young Joey can wander straight through vegetation without it reacting in any way. In addition, often creatures are caught in a default stance, moving like a child’s figurine across the area. Textures pop in and out and the lighting seems to fight with itself, hindering the experience. Similar to a great BBC documentary, the score perfectly captures the premise of the game. Seamlessly shifting from emotional, heartfelt melodies to tense, anxiety-ridden arrangements, the soundscapes in AWAY: The Survival Series are a highlight of the game. Although the narration is well implemented, different voice-over segments can be activated at once. Due to this, a strange overlapping of information is delivered creating a cacophony of noise.

AWAY: The Survival Series is an audacious game that fails to deliver on its excellent premise. Although clearly built with love and passion, the number of bugs and flawed mechanics make this a frustrating and arduous trek through the wild.

• Great Narration
• Feels Like A Documentary
• Some Nice Linear Sections 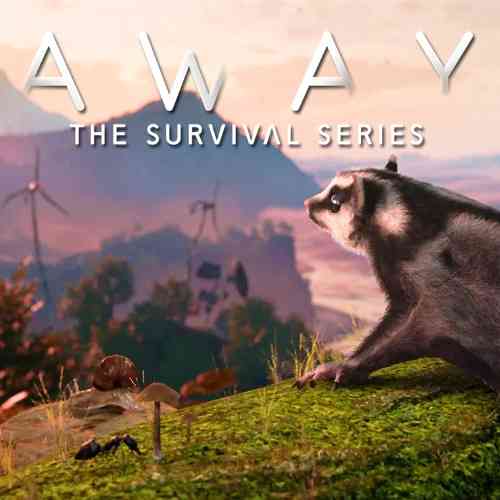