Assassin’s Creed: Rogue is an apt name for the seventh title of the vaunted Ubisoft series, as it has been a sort of neglected stepchild. Damned by comparison – to the great Black Flag when it was released in 2014, and to Origins now – Assassin’s Creed: Rogue Remastered offers slicker visuals than the original but still shows some of the awkward gameplay mechanics that plagued it on the PS3 and Xbox 360. Once you accept the fact that Rogue Remastered is not Origins (and get used to its irritating controls) you’ll find that living the pirate life as Shay Cormac is pretty damn fun.

Assassin’s Creed: Rogue‘s story takes place during the Seven Years’ War, and centers on the aforementioned Irish rapscallion, a newbie to the Brotherhood and still full of boyish charm and idealism under the tutelage of veteran Assassin Achilles Davenport. But Cormac sours on the Brotherhood when he is brought face to face with the results of their myopic obsession with their cause – and their icy indifference to the collateral damage it wreaks.

What follows is a clever inversion of the series formula, as Shay gravitates to the Templars and works not to assassinate targets, but save them. It’s a fun picaresque adventure that took me to towns all over the East Coast of 18th century North America – including Halifax and New York – and even featured some famous real-life historical figures as characters. The top-notch production values are enhanced by the Remastered version’s upgraded visuals. Voice acting is nuanced and helps bring texture if not depth to this tale, despite some dodgy Irish accents.

“The top-notch production values are enhanced by the Remastered version’s upgraded visuals.”

But if your first experience with the Assassin’s Creed Franchise was Origins, as I suspect will be the case with some players, there are some key differences you’ll notice straight away with Assassin’s Creed: Rogue Remastered. In contrast to Origins’ sun-baked dunes, Rogue’s geographical muse is the frigid North Atlantic. It’s a part of the world that has a certain rugged charm, for sure, but its cold, snowy climes offer a decidedly less-welcoming visual appeal than Bayek’s warm and colorful Ancient Egypt. The overall polish has certainly been improved with the Remaster, especially in the look and detail of ships and some positively sublime water physics. But overall, don’t expect the stunning beauty you saw in Origins.

But Assassin’s Creed: Rogue Remastered does offer one thing Origins did not: the thrill of exploring the ocean as the Captain of a sailing ship – and I must say, it really nails it. Piloting your very own pirate ship, with your drunken crew singing sea shanties as you prowl the high seas in search of plunder, is a consistent thrill that keeps Rogue engaging. While sea battles do get a mite repetitive after a while, upgrades bought from plunder, such as the puckle gun and flaming oil slicks, bring new twists and the massive open map always offers the allure of new and exotic locales to plunder. Assassin’s Creed: Rogue offers the full pirate experience you’ve always dreamt of, without the annoying sea sickness and liver disease. 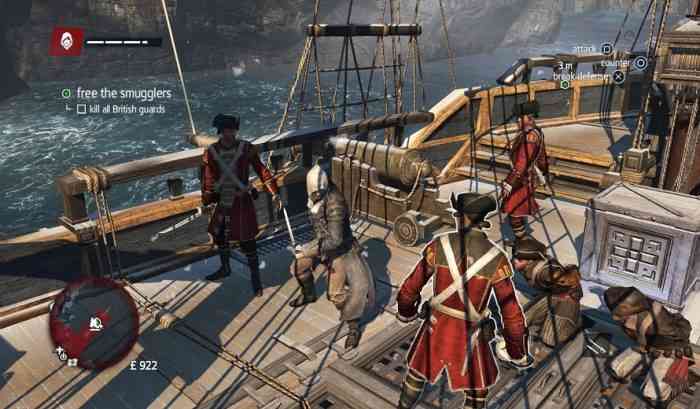 Exploring the Atlantic seaboard by ship is consistently fun, but Rogue is less successful on land. There are countless little towns and even some bigger cities to explore, but they lack the depth that players of Origins might have come to expect. Despite the presence of a few townsfolk, there is a lifeless and deserted quality to most places that will usually have you jumping back in your ship after meeting your quest objective. Some collectibles, like chests, Animus Fragments, pillars and even cave paintings have been sprinkled about for you, but they don’t offer enough obvious benefit to your main quest to make them worth chasing down. It might be unfair to judge a four-year-old game by today’s standards, but after experiencing the deep open world of Origins, it’s hard to go back.

And another aspect that might kill the nostalgia is Assassin’s Creed: Rogue’s control idiosyncrasies, which sadly, seem to have survived the upgrade intact. Movement is very imprecise and jerky, and your only two ambulatory options seem to be walking slowly, or running awkwardly around like, well, a drunken sailor. I found myself constantly bumping into walls, and even getting stuck on a protruding object – very frustrating when I was chasing a crucial target on a time limit. Platforming (something you do a lot of in Rogue) is also tedious, and I spent a lot of time climbing back up after missing a jump due to poor directional controls. Beware: in Assassin’s Creed: Rogue, every minor leap from a ship deck or rock face might become a frustrating, impromptu swim.

“It might be unfair to judge a four year-old game by today’s standards, but after experiencing the deep open world of Origins, it’s hard to go back.”

Combat is equally imperfect. While Shay Cormac does have some variety of moves at his disposal, such as parrying, the jerky movement makes these hard to implement when you’re actually engaged with enemies. Often facing off against a group of opponents in a big, confusing melee, I simply found myself spamming the attack button until the bad guys went down. And worse, I later just went out of my way to avoid combat altogether if I could. Rogue does have the usual solid Assassin’s Creed stealth options if you prefer, and I found these to be a much better option when I encountered enemies blocking my path.

Despite all of these issues, though, Assassin’s Creed: Rogue Remastered is still a fun time, and I was always excited to take the helm of my ship and head off to my next objective, and maybe sink a few British ships on the way and collect some booty. Shay Cormac is a charming rogue of a protagonist and his rum-soaked high-seas adventure had me … hooked (sorry). Some might get salty that it’s not quite up to the brilliance of Origins, but this pirate tale is still some jolly good fun under the Jolly Roger. 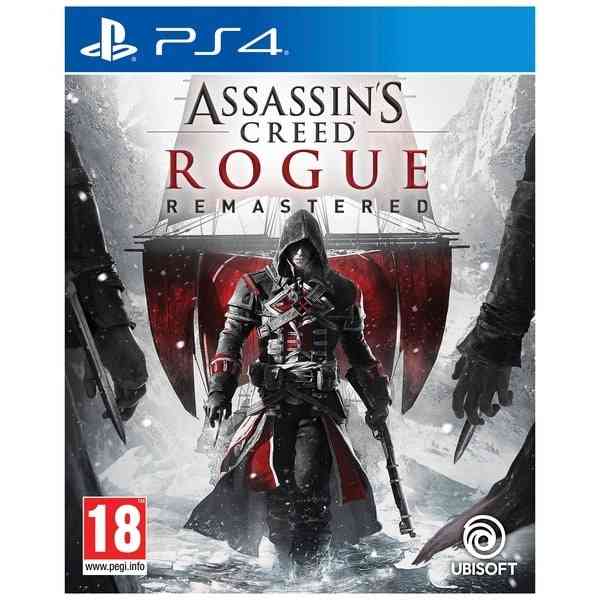