Regardless of personal opinions on exclusive titles, they’re probably not going away anytime soon. Luckily, they don’t all remain exclusive forever. Such is the case with The Mage’s Tale. Released last summer by inXile Entertainment for the Oculus Rift. This VR RPG has now made it’s way to Vive users as well. Nine months isn’t a long time, but at the pace VR games have been ramping up their effort, will this delay to the Steam VR market make The Mage’s Tale feel outdated, or does it still hold it’s own to this day?

First, we have some history here and a tie-in as well. The Mage’s Tale is actually set within The Bard’s Tale world. Even better, the game takes place right before the events of the upcoming The Bard’s Tale IV: Barrows Deep game. So there’s some connection to the old and set up for the new. This tale, in particular, sees you as a lowly apprentice whose master is kidnapped by the corrupt wizard Gaufroi and your mission is to save him. I Guess even wizards have on the job training. The story is light and enjoyable and may skew to a younger audience, but unless you’re a stick in the mud who takes everything too seriously, it should be fairly enjoyable to most.

The name of the game here is dungeons and magic. The dungeons are well laid out and filled with enemies, puzzles, and traps. While it might not immediately bring up nostalgia, reflecting back on playing there really is a classic approach to crawling through the dungeons. Instead of experiencing it through a small screen within a screen 30+ years ago, you have total immersion. All the elements are there from games of yore but packaged up for VR instead of a Commodore 64. Some things can get stale over time, yet this is certainly an instance where tried and true design is only enhanced by technology.

“Traveling through the dungeons gives that rare feeling of a pen and paper RPG coming to life.”

Well, if you do want to crawl through dungeons of old, then it’s best to be prepared with some weapons and what would The Mage’s Tale be without some magic? Being able to wield different elemental magics is pretty fun on its own, but that’s not where things end either. Adding a bit of crafting to the mix, you can customize your spells. How about an ice javelin that seeks out its target or maybe some bouncy fireballs. Along your journey you can find different ingredients to customize each spell. Besides being fun to play around with, this does allow for countless variations to suit your own personal style.

Now, the big question for any game in VR is how does it control? Looking the part and sounding the part are great, but to truly be immersed in the world, controls have to be on point. This is one area that I’m not too crazy about with The Mage’s Tale. The biggest issue here seems to be with movement. The main movement mode is teleportation, which I’m fine with, but there are too many movement controls mapped to the Vive Controllers.

The left trackpad is used for short hops of a step or two in the direction you press. The right trackpad binds 90° turns to the left and right side and up is teleportation. This means 7 of 8 possible presses are dedicated to movement. The one that isn’t brings up spell selection and can be extremely finicky to keep that menu open and nearly impossible in a fight. It usually took at least 3 tries before I could keep it open long enough to select a different spell. Spell selection could probably be made easier if so many of the limited number of “buttons” weren’t dedicated to movement. With a Vive, there is no real reason to have 90° turns mapped, it does roomscale really well, use that, it’s not hard for me to simply turn in the direction I want to face, in fact, it’s far more natural than pressing a button and immersive too. 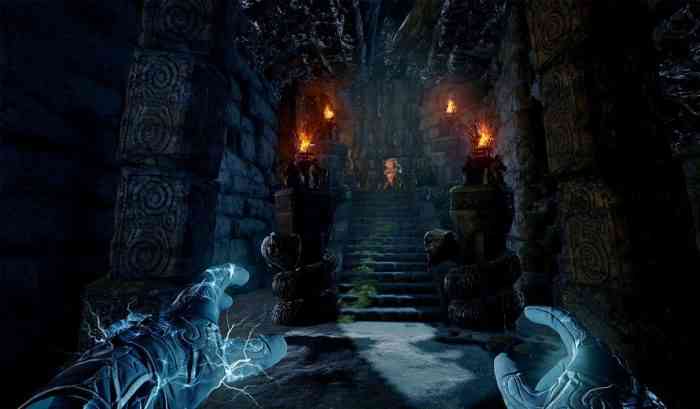 I understand different hardware do things differently and it can be hard to account for both. Maybe this control set up is necessary with a Rift or even Windows MR, but for the Vive it just seems wasteful. They’re not bad, just seemingly could be utilized better. The only real control that seems to be iffy is the aiming of spells. Too often my release point feels later than it would be if I were actually throwing an object. Despite this, you can adjust accordingly with some practice so it’s not a major problem. It’s not all negatives though, for instance, raising your arms over your head will teleport you back to the lab area. This is a good example of using alternative movement into the control scheme. It’s simple yet I actually feel like I’m casting a spell.

That feeling of connection through the controls is important to immersion. It doesn’t hurt that the world that they created is visually brilliant either. In fact, it’s one of the best I’ve seen. Traveling through the dungeons gives that rare feeling of a pen and paper RPG coming to life. The puzzles and traps are smartly done. Overall, this is a highly enjoyable VR RPG experience. Unfortunately, the weak link comes in the controls. While manageable they are the only real detraction from the whole package. Regardless, it’s still a good game that offers over 10 hours of playtime in the story mode and even more in the Horde mode. The positives far outweigh the negatives though and this is a solid option for anyone looking for a virtual reality RPG game. 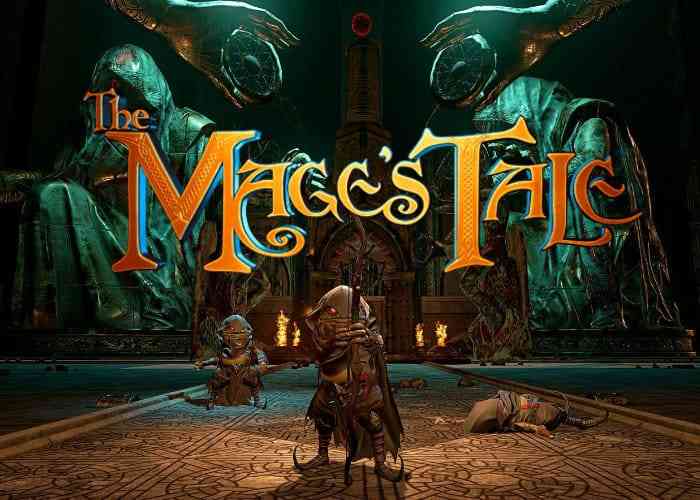 All On Board Entering Last 48 Hours of Kickstarter- DM Mode
Next Clustertruck Review – Get the Truck Out of Here
Previous Assassin’s Creed: Rogue Remastered Review – The High Seas Beckon Once More