Developed by SHADE, Assault Gunners HD Edition is actually a port of the 2012 PS Vita game. There was a time when mech combat games were everywhere, the most notable franchises being Gundam and Armored Core, of which Assault Gunners seems to pull its inspiration from the latter. Being a mech-starved fan myself, I found a number of small – very small – moments to bring me some happiness, however after playing further into the game I found it to be a shell of its potential.

Assault Gunners tells a story of you, a DAT pilot, working together with other DATs to take on the automated terraforming and worker robots – called ANTS – who have seemingly gone rogue and started attacking everyone. These robots are capable of building more robots, and so the supply of enemies seems endless, yet the games delivery on both this potentially monumental plot and the information itself fall flat. I try not to judge it too harshly as this is a straight port designed for the Vita, meaning it’s a game meant for slightly finicky controls and to be on the go despite the Vita designed to be a powerhouse of a handheld device compared to the handheld market.

“While it can be enjoyable for a mission or two, it’s easy to get bored and move on to something else.”

When I say this game is inspired by Armored Core I mean that in the best possible way; I still remember playing the PlayStation demo disk with the original Armored Core a hundred times over – despite only having two missions – because I wanted to unlock every part possible. So seeing a game that played so similarly was a treat for me. Players navigate the essentially flat map in a squad of four DATs and take out the enemy. Rinse and repeat. The game will display several dozen enemies on the map at a time and spawn more as they are defeated but overall it still feels barren, and the environment itself feels like a game from more than a decade ago. The story is even presented to you only as text over still images between missions, of which each mission can be completed between thirty seconds to two minutes. 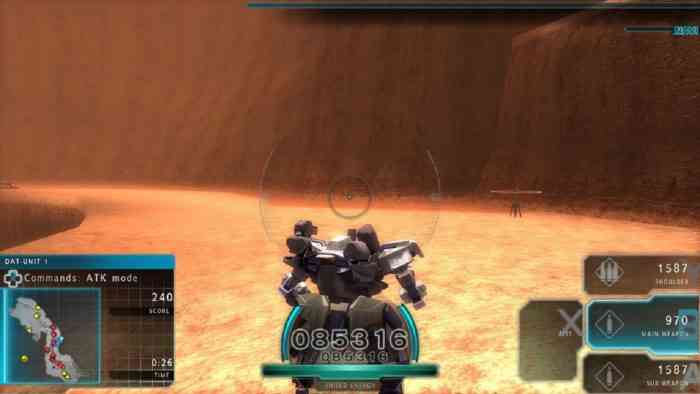 This did bring me to my biggest problem in one of the missions in which my objective was seemingly out of reach. I tried reloading the stage, changing my DATs equipment, and every possible video game related solution I could to solve this problem of the target I was meant to stand on being out of reach. I even took to the forums for far longer than I like to admit where I did in fact find others had this problem, yet no one had a solution. The target in question sits on the roof of a building, teetering on the edge of it as if it was slightly pushed just out of reach when the map was generated, but DATs, for some reason, cannot jump or fly. This further sullied my experience as I could accept the outdated graphics and slow turning cameras, as well as the complete exclusion of English voicework, but this brought my experience to a grinding halt.

“Nothing about the game feels tense or challenging, and completing missions within a minute makes it sadly forgettable.”

What Assault Gunners HD Edition DOES have going for it is its customization. Like Armored Core, players will rack up points to spend on developing new body parts as well as discovering upgrades and enhancements to attach to your DAT. The options are simplified, only letting you pick an upper body and legs, and it does only offer a very limited selection of color palettes to choose from, but again, this is a port from Vita and not built for consoles. I did find the variety of weapons were interesting, but not varied enough to feel like any one had a particular advantage in combat. In fact, rarely did I feel like I was in danger from the ANTS because my shields would regenerate so quickly and my computer allies were always there to back me up. Nothing about the game feels tense or challenging, and completing missions within a minute makes it sadly forgettable. 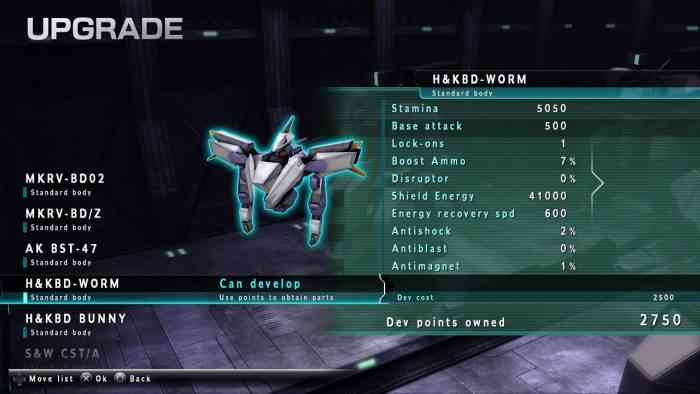 Assault Gunners HD Edition is a mech game that, while it might scratch your mech itch slightly, it doesn’t hold up as something to get invested in. It was built for the Vita and is best if it stays on the Vita. Taking several cues from Armored Core, it doesn’t reach the height it sets out to with boring stages, simplified customization, non-threatening enemies, short missions, and a story that does not capture the imagination. While it can be enjoyable for a mission or two, it’s easy to get bored and move on to something else. If you are simply dying for a mech game and have some money to spare, it might be worth it. 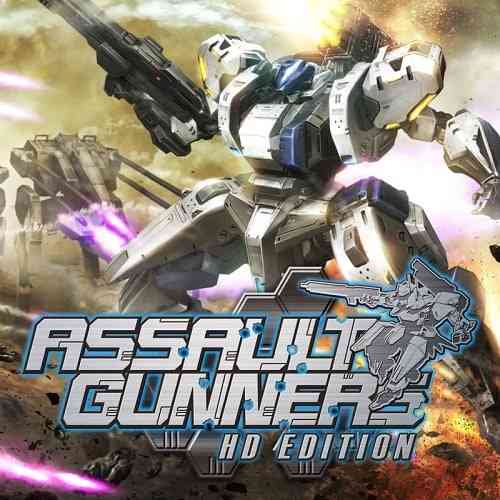 Nioh 2 is Absolutely Stunning on PS5
Next Assassin’s Creed: Rogue Remastered Review – The High Seas Beckon Once More
Previous MLB The Show 18 Review – Staying Ahead in the Count