Ash of Gods: Redemption is so similar to the Banner Saga games, it could practically be an expansion pack. From the gameplay to the graphical style, the two games share so much DNA, you’d be forgiven for thinking they were twins, or at the very least siblings. Both have charming Ralph Bakshi wannabe graphical styles, and both are tactical RPGs. From the obvious to the subtle, these are very similar games. Unfortunately, Ash of Gods comes out looking the worse for it, because it loses out when the inevitable comparisons arise.

For those who have not had the chance to play Banner Saga, here is a primer. At its core, a tactical RPG, the game integrates a number of different mechanics to make the story feel dire. You lead multiple groups of survivors through a high fantasy apocalypse. The story is gritty, and as the commander, you have to make many consequential decisions, which are informed by the mechanics. Do you head North through the dangerous mountain pass or South where you might have a chance to resupply? Does it make a difference that the Southern valleys are controlled by a faction you attacked in the past? You may have to because you had to throw away most of your resources in a daring escape in the previous chapter.

In terms of the weight of your decisions, Ash of Gods does alright, but it never reaches the high levels of tension found in the Banner Saga. This isn’t a mere choose your own adventure game though, and the bulk of gameplay is spent in tactical, grid-based combat. Even this is extremely similar to Banner Saga. Characters have health and energy, the latter of which they can draw upon to do special attacks, but get too low on energy and you make a character vulnerable to extra damage. There are different classes and heroes, with their own special moves. Give orders to a character, and watch them saunter slowly up to the enemy and deliver a beautifully animated and brutal strike.

“As an RPG, writing is crucial. Ash of Gods just doesn’t have it.”

The tactical combat is very good for those who like that sort of thing (and I very much do), but it’s all a bit opaque. Although there are instructions and tutorials, I had to rely much more on trial and error to figure out how everything worked. That brings me to the main flaw in Ash of Gods, one which is nearly a dealbreaker. And that is the writing.

As an RPG, writing is crucial. Ash of Gods just doesn’t have it. This comes across in the dialogue, which is often laughably strange, but also in menus and tutorials. Sure enough, this is not a team that speaks English as their first language, and it really shows. The gritty fantasy tone is straight out of Game of Thrones or The Witcher but the peculiar turns of phrase make the conversations about dicks and whiskey sound like they were written by teens. Sentences are awkwardly phrased, and characters constantly feel like they are clenching with the effort of finding the right words. It also makes combat instructions difficult to parse. 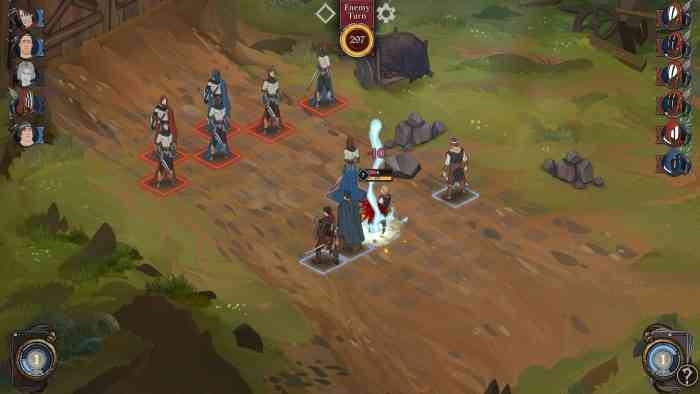 Buried under that are cool characters and a decent story, but unfortunately, they are also nearly identical to the Banner Saga and come out looking the worse for it. There’s an ancient and mysterious race, who knows something about the ancient and mysterious foes who mercilessly lay waste to the land. There are a gritty but compassionate retired soldier and his feisty daughter leading a group of desperate survivors. There’s even a similar map of dueling kingdoms.

If you’ve got a very specific Ralph Bakshi craving, you could do worse than Ash of Gods: Redemption. It’s not a bad game, it’s just too similar to a better one. If you haven’t played Banner Saga and its sequel, you’d be much better off getting those. If you have and are desperately awaiting the third game in the trilogy (as I am), think of Ash of Gods as janky fan fiction. It might hold you over for a while.


Submerged: Hidden Depths Takes You on an Incredible Journey