Double Kick Heroes Is a Rhythm Game With Zombies

Double Kick Heroes is a game in which you can kill freakish mutants, zombie chickens, and jerks, thanks to the power of music. But not just any music; it’s a mash of metal soundtracks in a story about a rock band surviving an undead apocalypse. In other words, I had every reason to be excited going in.

Developer Headbang Club could have created a few pixels, assigned musical instruments to each, and set them on the road to bullet hell. Nope. The story of Double Kick Heroes provides a modest effort to flesh out the band and its members. Randie, Derek, Lincoln, James, and Snake must traverse the aftermath of a zombie apocalypse to discover how the world ended up so hellish. This entails a seemingly endless road trip in which they must utilize the power of music (and ammo) to overcome the twisted obstacles bitterly breathing down their car and kicks. Enemies take the form of racist zombies, biker gang raiders, dinosaurs, and most importantly, tentacles. Along the way, you meet interesting characters whose callbacks meld perfectly with the plot’s satirical tone. Movie, musical, and geek references are all a guarantee. Some of the jokes even made me laugh.

Double Kick Heroes‘ campaign is part narrative part music album. It is literally a metal album and an album in terms of length. I clocked in roughly three hours of gameplay in the campaign on “Hard Rock” difficulty, which is the metalhead’s equivalent of normal. But this game offers some of the greatest replay value, and the value of replaying goes further with the Editor. A gem of a feature, Editor lets you upload any song from your computer and craft a level around your favorite tunes. Afterward, you can share the level with other users. On its own, it is enough to keep you busy for hours upon hours constructing a perfect melody of mayhem. I really look forward to witnessing the kinds of levels and bullet sequences players craft around their favorite tracks. Every level is a moving diorama in which your musical beats fire bullets. It’s as simple as killing enemies before they chase you down. Though they come in different shapes and sizes, with the occasional boss battle, they all do the same thing. Variation lies in the rhythm controls, the music, and the enemies.

“Double Kick Heroes has the potential to outshine Guitar Hero, thanks to guitar controller compatibility.”

Double Kick Heroes has the potential to outshine Guitar Hero, thanks to guitar controller compatibility. Unfortunately, I didn’t have a guitar controller on hand. Game controls rely on a flowing sequence of notes, and I managed these with a keyboard. At first, you get into the groove of gameplay with some monotonous tapping, but the required precision gets progressively more complex as you move further into the story. Suddenly, you’re tapping to the beat like your life depends on it. More finger dexterity is necessary down the line, and it gets very engaging and very difficult very fast if you’re playing on any difficulty beyond Hard Rock.  As a special caveat, higher difficulty settings unlock additional controls for additional abilities. In conjunction with those additional abilities comes a more complex control scheme. The desire to master every scheme may be what hooks you if the music doesn’t do so first.

Like the best moments in gaming, I found cathartic satisfaction after matching, beat for beat, the keys to a difficult level. Even comparing Double Kick Heroes to triple-A games, I found very few instances comparable to the moment I blew the hell out of an undead dinosaur using bullets and explosives synchronized to the licks of a guitar riff. The sound in this game gets an A+. However, if you are heathen who wholly eludes the heavenly sounds of metal for lack of taste, then Double Kick Heroes quite frankly isn’t your jam. Everyone else with a taste in music, however, will love this game. I would even say the preference for metal music translates into a strong appreciation for the game’s narrative. However, the narrative is still background music to the music. A few obvious issues did present themselves during my zombie-killing tour across America. The inherent one I found is that the more demanding the controls, the less you’re paying attention to the zombie-killing spree on-screen. The real experience seems muted if players place all attention on matching the patterns on the bottom. Another small detriment is how boss battles introduced manual control of the car. What’s so off-putting about moving the car is the amount of real estate you’re fingers must suddenly cover while constantly tapping keys. It seems implausible, but there are undoubtedly players out there who can manage.

Double Kick Heroes is a friend to all manner of gamer, headbanger or not. It’s wonderful tracks, post-apocalyptic backdrop, and various features boost the fun factor well beyond your typical rhythm experience. While I don’t consider the IP to be anything groundbreaking, Headbang Club clearly has an audience in mind. I’d say they’ve managed to cater to that audience and then some. 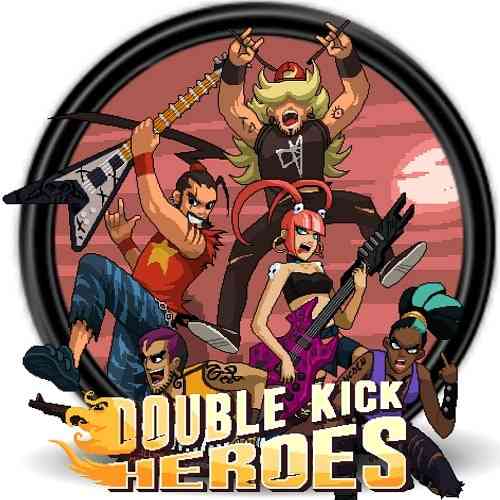