You may have heard that Ape Out, from indie developer Gabe Cuzzillo, is like Hotline Miami but with apes, and there’s definitely truth to that statement. Yes, it might wear its visual and gameplay influences on its big, hairy sleeve, but Ape Out still finds a way to make a bold, fresh statement all its own. Be prepared to indulge your most primal primate fantasies, because this is one simian sim that brings non-stop Silverback savagery in an addictive and original package.

As per the title, Ape Out‘s premise is simple: you’re an ape, and you want out. Busting through the glass of your enclosure at what is presumably some kind of animal-experiment lab, you’re thrown right into the action and it’s time to start runnin’. The game is divided into short, discrete levels, each one a maze that you must solve to move on. Standing in your way are hordes of human guards packing guns — you can only absorb three of their bullets before you’re dead. Early enemies fire a simple, single shot but later baddies add a twist of difficulty, for example by firing shotguns with wider spread or tossing bombs. Eventually, even SWAT teams appear if you get far enough. There’s almost a bullet-hell feel at times to Ape Out as you frantically run around trying to avoid shots coming from all angles.

You’re not completely powerless though — hey, you are a 400-pound primate after all. The ZL button grabs an oncoming guard in your arms and you can use them as a human shield and even direct their fire at other enemies. But my favorite method was also the simplest: pressing the ZR trigger when near a guard thumps them with a massive blow that usually makes their bodies explode into a mess of body parts and blood. And by blood, I mean buckets and buckets of blood. There’s an endorphin rush to seeing the horrifying results of each kill that will get your heart racing. In fact, as you run around smushing these puny people with your massive monkey forearms, the spreading of giant swathes of blood-splashes everywhere begins to make you feel like a kind of ultraviolent artist, a homicidal Jackson Pollock creating a gory masterpiece in the medium of blood. 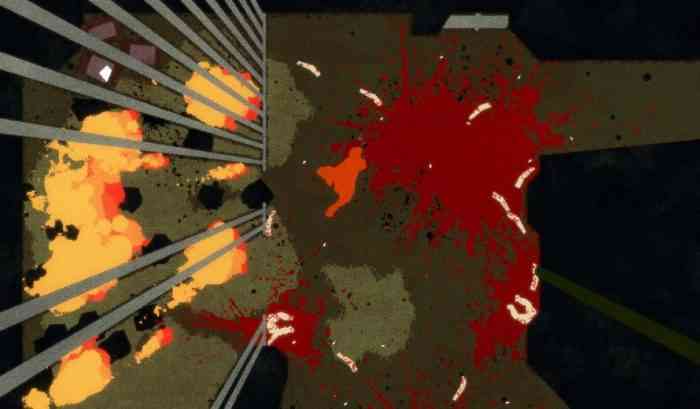 And oh, what a visual artistic canvas you have to work with. The top-down Hotline Miami-esque look reduces you and your enemies to monochromatic white shapes almost like an infrared camera. Bright, contrasting colors punch out at your eyeballs continually, including with the artistic titles that give Ape Out the feel of a 1960s action movie or vintage cartoon. Later levels play with light and shadows, testing your ability to predict enemy movements. Adding to the fun visuals is the accompanying soundtrack by composer Matt Boch — a cool percussion-heavy jazz that riffs on the frantic action. Each brutal hit on a guard brings a cymbal smash, and a bloody kill elicits a boom of sound and light that together act as a kind of Pavlovian reward spurring you on to commit more melodious mass-murder and keep that awesome beat going. Much like the old classic Pac Man, the musical tempo also ramps up in time with the action, both mimicking your increased heart rate and contributing to it in an addictive feedback loop.

This Sh*t Is Bananas

Ape Out is hard, but not unduly frustrating. Guards will swarm at times and you’ll often sweat to stay alive without any protection from all those bullets. Plus, when you die you have to start back at the beginning of each level. But you quickly learn to use the game’s pillars, corners and walls to your advantage and avoid exposure. Guards also have patterns of movement that can be used against them, including a pause between their shots. Some can even be thrown, like improvised human bombs. A lot of the challenge I felt playing was self-inflicted; often I could have sped through a level but I just had to stop and bash a few more guards just to see them explode. Sure this is a game of raw physical brutality but there’s also a lot of player choice to each level that keeps you constantly challenged but still always feeling like your survival is in your own hands — and brain. 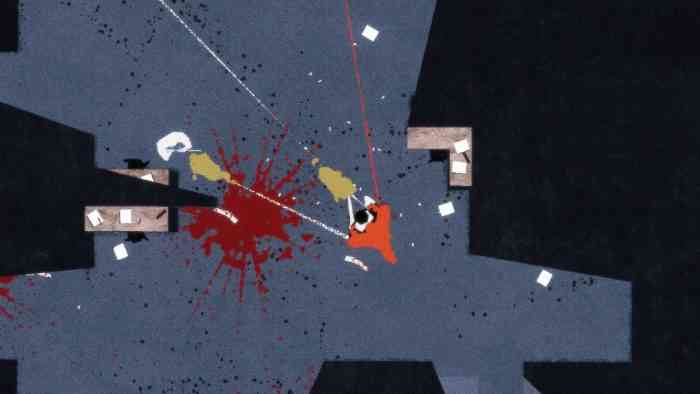 If we’re being honest, does Ape Out get a bit same-y over the long haul? Sure, but not as much as you’d think. The game is divided into 32 levels, presented as tracks on 4 “albums,” in keeping with the jazz music motif. Each level is a perfect length, just long enough to make for a challenge yet short enough to keep you striving to complete one more before frustration gets the better of you. Plus, you’re faced with new environments to escape from, each with new visual appeal and challenges. There’s no doubt that you are doing the same thing through each of them and Ape Out could offer a bit more gameplay variation, but there’s enough other fresh elements that you’ll never find it tedious.

Yes, Ape Out is a short game but the action, visuals and soundtrack are simply bananas. Plus, the price is definitely right at just $14.99 US. That’s a lot of primate pandemonium for a pretty fair price, and that’s not even mentioning the extra Arcade Mode in which you earn points for kills and speed. A refreshingly original game that takes its gaming influences and runs with them like a jazz soloist on a Saturday night, Ape Out is one game that elevates ultraviolence to an art form.