Disjunction is Another Cyberpunk Game to Keep an Eye On

A game that appeared quite generic within the PAX Online portal was Disjunction. Described as a “cyberpunk stealth-action RPG”, this description could fit a number of indie titles looking to get in on the cyberpunk action. However, the game somehow immediately pulled me in with its narrative.

A community leader is arrested for killing a police officer, with a new drug spreading its way throughout the city being connected. Within minutes of the demo’s start, I found myself making various comparisons with other works such as Shadowrun, Ghost in a Shell, and even the 2012 film, Dredd. The demo features two of the game’s three characters. The first, a private investigator looking into the aforementioned community leader’s arrest and surrounding events, and the second, a man looking for answers regarding his daughter.

Both storylines feature relatively similar gameplay within the demo. Players are tasked with infiltrating different areas in order to achieve their respective objectives. To do so, players will have to use stealth, melee attacks, ranged attacks, and special abilities. The gameplay takes place with a top down camera and Miami Hotline-like combat (with stealth). While the gameplay for both characters was pretty similar, their special abilities set them apart, forcing players to adjust their playstyles in order to succeed. I would expect that as the abilities improve how players want, the characters will start to become even more unique. 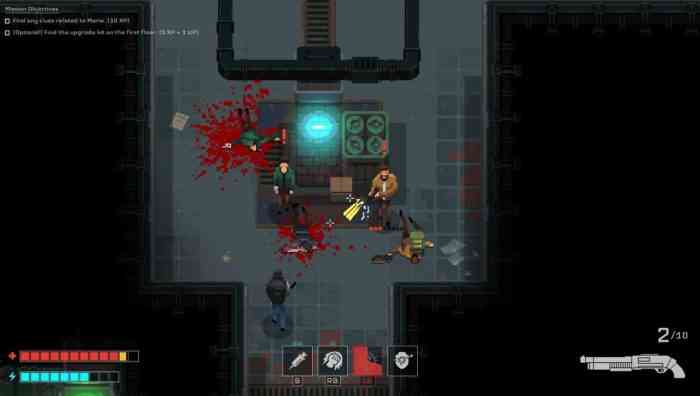 The gameplay demo was relatively short with three levels and a similar amount of narrative sequences. In that short amount of time, the demo did well in demonstrating its core gameplay loop and the world that the developers have crafted. Perhaps the most intriguing element of Disjunction is only touched upon in the demo. Certain actions had narrative consequences (killing enemies when asked not to), and there was a fair amount of conversational options. Though these did not have any major effect during the demo, the Steam page does indicate that the story is reactive to player choices.

While the gameplay of Disjunction was fun, I have to admit that the vertical slice of narrative shown is what will likely have me coming back to the game when it launches. Disjunction is “coming soon” to consoles and PC, and it will most likely be on our list of games to check out when it does release.