The Liar Princess and the Blind Prince Review – Charmingly Simple

The Liar Princess and the Blind Prince Review

The Liar Princess and the Blind Prince is a short side-scrolling action-adventure game with lovable characters and an imaginative plot. Narrated in Japanese with English subtitles, Liar Princess introduces a heartwarming story that captivates audiences young and old. Although it’s not a long game and some of its puzzles can feel repetitive, the games visuals, soundtrack, and storyline really help elevate it to become an eventful experience.

The Liar Princess and the Blind Prince is about a wolf with a beautiful singing voice who sings every night on top of a cliff, with a young prince as her only audience. The prince, unaware of the wolf’s identity, wants to find out who is behind the lovely voice. Terrified at the prospect of the prince finding out she is not human, the wolf attempts to cover his eyes but mistakenly scratches them instead. Injured, blind, and now scared of the touch of a wolf’s paw, the prince is taken back to the castle and locked up. Feeling grief and wanting to help heal the prince’s eyes, the wolf visits a witch and exchanges her singing voice for the ability to transform into a princess. The wolf then goes to visit the prince, transforms into a human girl and lies about being a princess, and breaks him out of the castle to bring him to the witch to heal his blindness.

The game is extremely easy to learn, and the levels are relatively simple with a straightforward goal. You play as the wolf, and to make it more interesting you can transform and become the princess at any time. There is a little strategy involved because the prince does not trust the wolf, so the wolf always has to transform into a princess to hold his hand in order to lead him through the different stages. Because some actions in the game require you to change back into a wolf, you cannot permanently stay a princess. For instance, as a wolf you can attack monsters, jump greater lengths, and drop down from higher places; but when you are playing as the princess, you can guide the prince to where he needs to be, control certain switches, and go into tighter spaces. Both forms have their advantages and disadvantages, and part of the fun is finding out which transformation will benefit the current puzzle.

Unfortunately, the game does not get any more challenging, and some levels become repetitive and uninteresting since it can be the same puzzle dragged out into multiple stages. Of course, every so often the puzzles switch up a bit and the game introduces you to new challenges, which definitely keeps the player a little more engaged. And do not worry about making a mistake and dying – the game autosaves very often and the loading times are quick and barely noticeable. 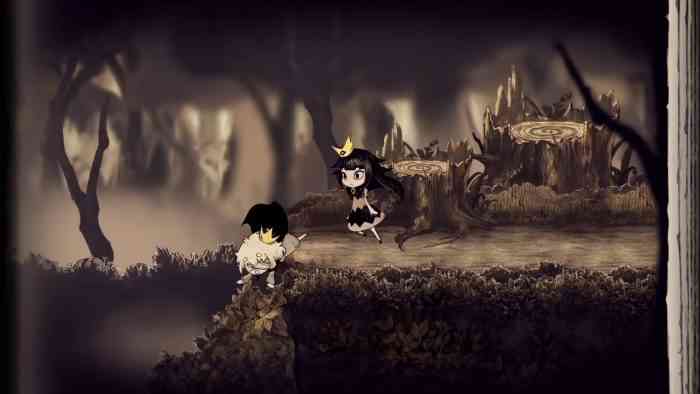 While the controls are simple to grasp, one thing to note is the fact that some of the controls are not very intuitive and can take a while to get used to. Most of the time this is not a problem because almost all of the controls feel natural, but when it does become an issue it is very obvious. Even though it usually only takes a couple of tries to get it right, it can still be a little frustrating to manage a somewhat easy task.

Despite the short length of the game, Liar Princess does well in telling its story through interesting cutscenes and amiable characters. Even though there is not enough room or time for character development, a lot about the wolf and the prince is already seen in the first few minutes of gameplay. Arguably they are not the most interesting protagonists, but the story carries incredible meaning for a game so short. The narrator is an excellent choice as well, with her soft, dreamlike voice detailing the wolf and prince’s adventure, and the background music is flawless and fitting for the story’s tone.

With its beautiful artwork and incredible soundtrack, The Liar Princess and the Blind Prince is a satisfying experience that could be further enhanced with more intuitive controls and a larger assortment of puzzles. Even though sometimes the puzzles can feel too easy or monotonous, the lack of challenge can be preferable for players looking for something simple. Being on the shorter side in terms of game length, Liar Princess would not have done any better if the game was longer – in fact, it was a good length for the purpose of the story. Overall, The Liar Princess and the Blind Prince was a delightful experience and is undeniably a story to remember.