Before the blue hedgehog became the face of Sega, another character led the charge. With his ridiculous sideburns, huge ears, and massive fist, Alex Kidd spawned several successful titles making the wide-eyed martial artist a household name in the 80s. Clutching the franchise from obscurity, Jankenteam aims to breathe new life into the rock-smashing hero with a remarkable makeover that brings his first outing in line with contemporary titles in the genre.

With the kingdom of Radaxian in peril, only one can save the day. Tasked to retrieve royalty from the evil Janken the Great, you are required to take down his knuckle-headed henchmen to bring peace back to the realm. Although it’s a conventional rescue story, the newly implemented cutscenes help create a storybook feel that perfectly compliments the game.

More Than a Lick of Paint

Each level has been faithfully and lovingly recreated in Alex Kidd in Miracle World DX. Environments are littered with details helping to give character to what once was a blank backdrop. Jankenteam has implemented flourishes to the foreground, helping to create depth to the 2D plane. The vibrant color palette is breathtaking and is further enhanced by instantly switching to its 8-bit counterpart. With a click of the button, you can immediately switch to the original title and marvel at the differences. Although this has been done in the Wonderboy remakes, it’s a great option to include as I regularly stopped at new areas to see how the talented folk at Jankenteam had reinvigorated them. 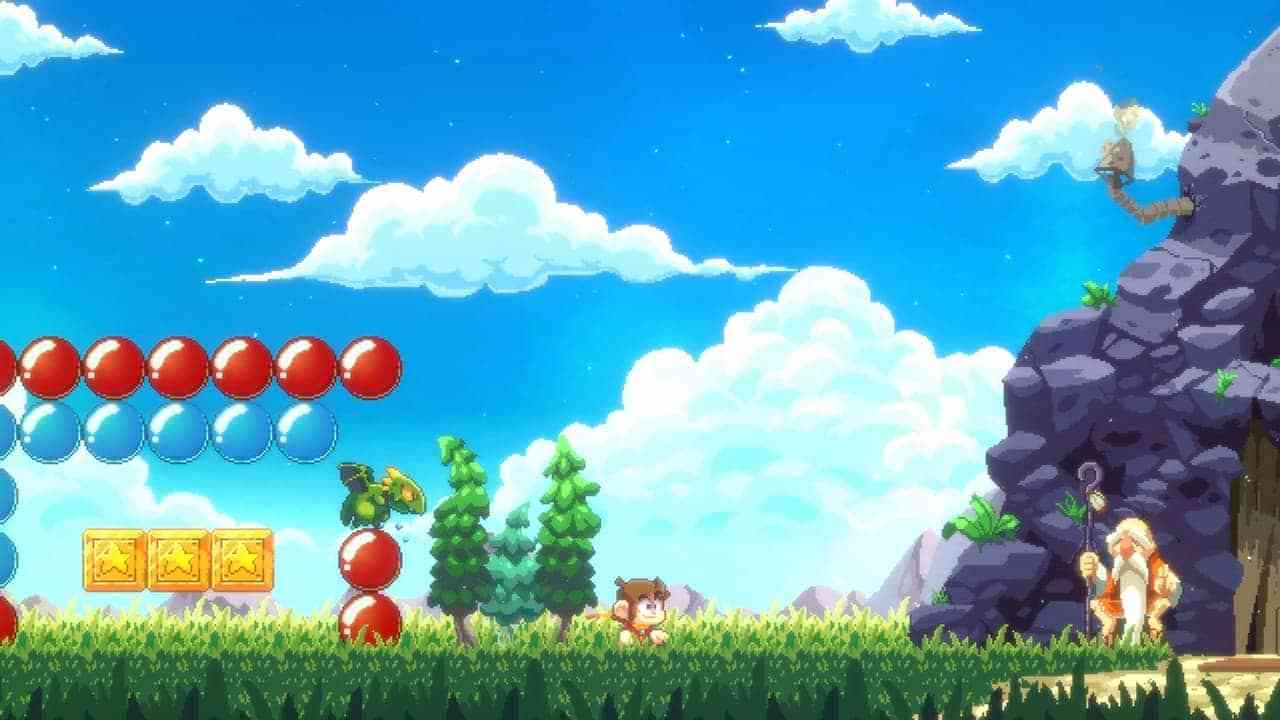 Taking inspiration from the late 80s and early 90s cartoons, each character has been incredibly redesigned to exude personality. Their bulky and exaggerated appearance helps to modernize the title, re-establishing the hungry hero to the masses. Additionally, the audio has been completely revamped. Still maintaining the catchy melodies of the originals, each track has been built from the ground up, helping to embed the jaunty feel of the game further.

Although levels are short, there is a high degree of difficulty. Equipped with three lives, you will need to maneuver through hazardous courses whilst collecting bags of money to reach a delicious burger or another food-based item at the end of each stage. Bearing in mind that the original was released in 1986, the variety in the game is incredible. With a range of unique items purchased at shops at the beginning of certain levels, Alex Kidd is a diverse platformer that pioneered staples of the genre. From fire-powered rings to vehicles, each item changes your approach to levels. Alex can race across the terrain at a blistering pace or even take to the skies in a helicopter. Failure at these sections will result in tackling the level in a different method, whether on foot or at times even plummeting to the sea.

A Fight to Remember

Culminating obstacle-ridden levels are the boss battles; however, in an odd move away from traditional fights, you challenge foes to a game of rock, paper, scissors. Yes, after pushing your platforming skills to the limit, you are placed in a game of luck. If you lose two out of three rounds, then tough, you die and start again. Win and proceed. Although it can be a little annoying, this odd inclusion really sums up the game’s innovation. Towards the final third, battles become more conventional, requiring you to avoid attacks in order to strike.

Death is Inevitable. By merely grazing an enemy, you will lose a life and respawn from a generous point. Due to the slippy controls, it is quite easy to miss the mark when taking to the skies. This can result in some frustrating moments, especially when precision is required. Although I understand Jankenteam’s commitment to reimagining the original, I would have liked to have seen them tighten the movement. Those new to the franchise will be perplexed by the lack of certain genre conventions. For example, you can not jump on the heads of enemies. Attacks are front-facing with a strict hit detection area, making each confrontation a life-threatening task. 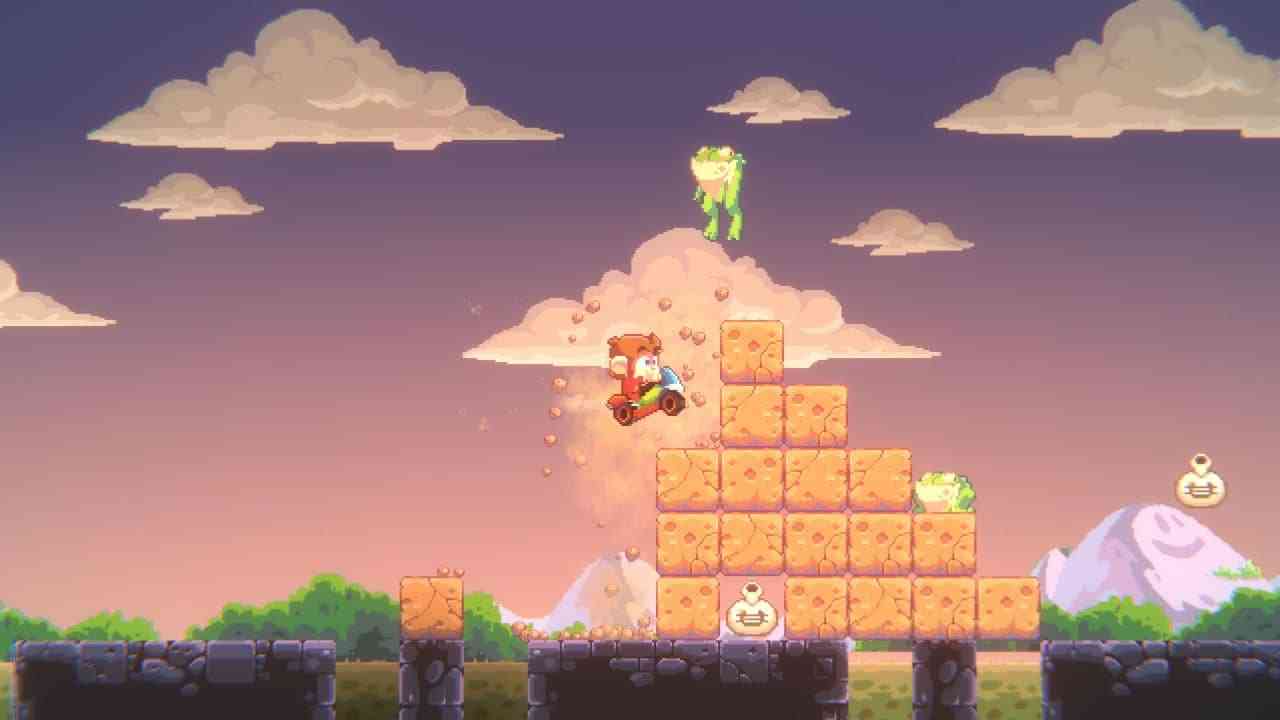 Now featuring a life counter and the ability to cycle through power-ups, quality of life alterations have been made to modernize the game whilst keeping faithful to the original. Although some may sneer at the option, the ability to enable infinite lives is available, which is perfect for newcomers. New levels have been seamlessly implemented into the game, and original stages have been expanded. After completing the campaign, you will be able to access the new boss rush mode and the 1986 release, creating a complete package that celebrates the original release.

Alex Kidd in Miracle World DX is a beautiful reinterpretation of a classic. Although some elements feel outdated, it’s the perfect introduction to the franchise. Jankenteam has successfully rejuvenated the legendary hero, hopefully kickstarting a resurgence of the series. 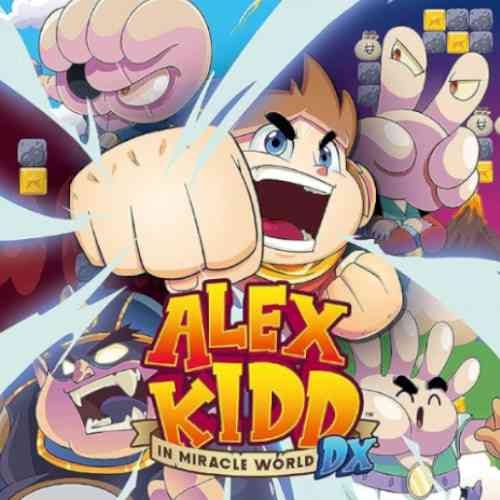