A Rogue Escape Review – Meching A Break For Freedom

If you enjoy escape rooms, and you’ve always wanted to pilot your very own mech, then A Rogue Escape might be for you. Despite a short play time and a limited, even claustrophobic perspective, this is one VR title that utilizes VR in a mostly fun and satisfying way.

To start the game, you’re given almost nothing in the way of guidance. There’s just an elevator with a retro, steampunk control panel in front of you, and you’ve got to fiddle with the knobs and buttons to learn what you’re supposed to do to progress. Then, after solving that puzzle you find yourself on board a mech — I wasn’t sure what exactly it was but it felt like a submarine to me, with its name being a Nauticrawl, and its periscope, steering wheel and other nautical touches.

At any rate, on board the mech you’re again completely on your own to figure out how to get this behemoth moving. There’s a tablet provided to you, with a few cryptic clues, but otherwise it’s a lot of trial and error. All of which is totally fine, by the way — I found A Rogue Escape to be perfectly balanced between too easy and frustratingly obtuse. There’s no doubt that it took me some time to figure things out, but once I did I was really pleased with myself; there was a clear sense of accomplishment as I played A Rogue Escape and overcame its challenges.

While the bridge of the Nauticrawl seems at first like a hopelessly-convoluted morass of switches, levers, buttons and knobs, you learn the logic of it all after a lot of random guessing, and eventually you’re piloting the ship en route to your eventual escape — hence the title. You learn from bits of story here and there that you are a fugitive in some dystopian steampunk world and you’ve absconded with the Nauticrawl to make your way out. Your route of escape is shown to you via a holographic min-map that reveals terrain as you move. Otherwise, you’re “flying blind,” with no portholes or other windows to help you navigate.

You’ll make a lot of mistakes as a result. I took a fairly long time just to get this contraption to move; then the first few times I crashed it and damaged the hull. Oops. Luckily, there’s a percentage damage indicator that tells you how many more mistakes you can make before you’re done. Once I got the hang of moving, and steering, I overheated a bunch of times, and that’s when I learned how to vent the engine heat every once in a while. A Rogue Escape does a good job of forcing you to learn as you go, and you gradually feel better and better as your hard-won knowledge grows. 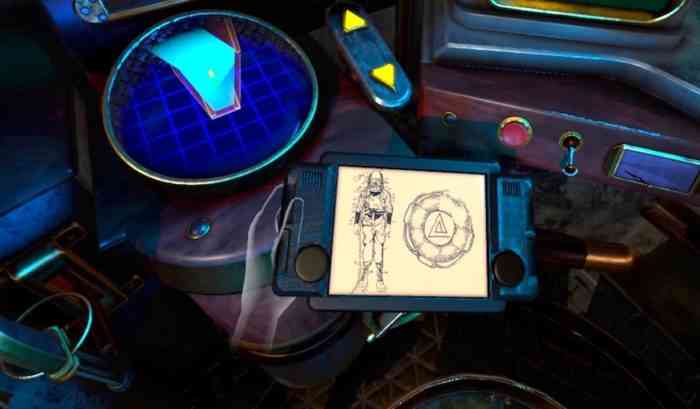 I must say that the sense of blindness, while on one hand a nice challenge, does wear on one’s patience after a while. If you’re looking for a VR experience full of strange, new worlds to see or eye-popping 3D visuals to delight your eyes, you’ll find A Rogue Escape somewhat wanting. While the mech’s control room is nicely rendered and lovingly crafted with detail, there’s little in the way of thrilling exploration and discovery that normally makes a VR game such a treat.

But even so, I enjoyed piloting the Nuaticrawl more than I expected and that made the game a fun experience overall, despite the rather one-dimensional gameplay. The control room is well laid out, and VR is utilized well, requiring you to physically grab, turn and pull the controls just like a real ship’s captain. You’ll definitely need a room-sized space for this, and no obstacles in your way, as a few of the controls require you to actually take a few steps to reach them — so if you like to play your Oculus games lying in bed, A Rogue Escape is not for you.

Just like learning to pilot the ship, the narrative in A Rogue Escape is revealed very subtly and bit-by-bit as you play, and you have to actively seek it out. You learn what’s what by reading text messages that come in every once in a while — kind of like reading books in Skyrim, except in this case it’s required reading, not just extra “lore.” The story is fine but a bit predictable and doesn’t feel all that satisfying after all the arduous effort you’ve put in to get there, avoiding walls and laser turrets and just plain dumb mistakes.

It’s also short. That’s a common complaint in VR games, though, and it seems that in these early days we’ll have to judge VR games by the quality of their content, not the quantity of it. By that standard, A Rogue Escape is a decent experience. If you like a game that doesn’t hold your hand, you’ll like this one. And, unlike many such games, the payoff for learning all by yourself is worth it; you’ll have some genuine fun as you grow more adept at piloting the Nauticrawl. I wish it was longer and ended better, but in its early and middle stages, A Rogue Escape provides enough satisfaction to make it worth a try.