This year has already seen the release of so many wonderful rogue-like/rogue-lite titles. From Skul: The Hero Slayer to Curse of the Dead Gods to Loop Hero — there has been a non-stop wave of new games for fans of the genre, and yet despite the consistent releases, all of these games have managed to stand out on their own. Voidigo is in a bit of a different situation than the others that I’ve listed above. Unlike the rest of these titles, Voidigo is still in development and just recently released in Steam’s Early Access, so while I’ve had the pleasure of playing the full experience for these other three games, I’ve only gotten the chance to experience Voidigo’s beginnings but trust me, that isn’t a bad thing.

Despite still being in development, Voidigo feels like a full game while you are playing it. The game is a chaotic top-down shooter with a colorful aesthetic and fun and challenging boss fights. The game’s combat, map layout, and overall game design are very similar to Vlambeer’s Nuclear Throne and Dodgeroll’s Enter the Gungeon but it does more than enough to stand out from its predecessors.

All three games have similar top-down shooter gameplay with a variety of characters to play, weapons to use, items to find, enemies to kill, and rooms to explore. Where Voidigo stands out is in its core premise. Boss battles aren’t just something you do at the end of a floor like in Enter the Gungeon, they are something you do throughout the floor as you explore the map. In Voidigo, you’ll have to cleanse Beacons in hopes of stopping the spread of the Void and in doing so, will weaken the boss roaming around the map. See, in Voidigo the boss can show up or run away at almost any point and while you can hunt it down, you will need to cleanse enough Beacons to be able to defeat it once and for all, but don’t wait too long or you’ll be the one who ends up getting hunted.

Hunt or Be Hunted

It’s an interesting twist being able to fight a boss on and off throughout a level. The bosses themselves are intimidating and well-designed, making them extremely satisfying to defeat. Being able to strategically hunt or avoid the boss as needed gives the game a bit of a Monster Hunter feel. You aren’t confined to finishing a fight once you start it, instead, you are given the freedom to choose when to strike or when to fall back and recuperate. Of course, there are also a number of regular enemies here to ruin your day that you’ll need to keep an eye out for so don’t get too comfy when the boss isn’t around. 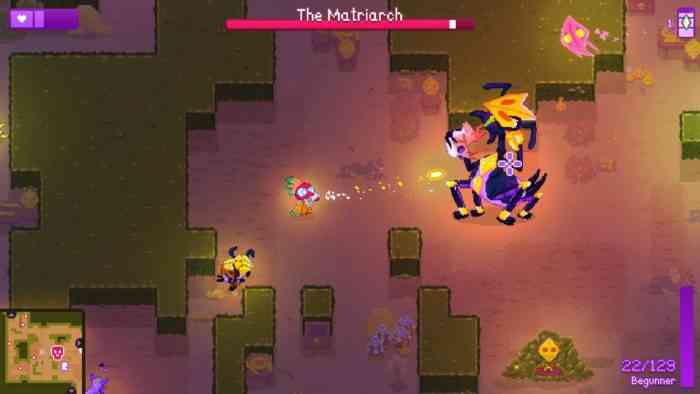 I mentioned earlier that Voidigo feels like a full game while you are playing it and that is largely due to how refined the combat feels. Every gun feels different from one another but is still able to pack a meaty enough punch to get the job done. Guns aren’t the only thing you’ll find throughout your runs as the game also has a ton of melee weapons to bash your enemies with as well.

Combat is difficult but to an obtainable level where I don’t feel like I’m beating my head against the wall trying to survive from room to room. At this point, there is only one playable character, but with a solid variety of guns and power-ups to obtain, there is more than enough run variety to keep the game from feeling too stale or repetitive. There are even a number of bonus challenges you can take on throughout your run to better prepare yourself for the challenges ahead.

Visually the game is extremely bright and colorful and has an overall really fun aesthetic with some additional customizable HUD options. There’s also a huge amount of difficulty options which is often a missing feature for games in the genre. Remember, options are never a bad thing as having these choices might make the game accessible to players who would otherwise have not been able to enjoy the experience — and that goes for both the easier and harder difficulties.

Right now, Voidigo doesn’t stand amongst the greats of the rogue-lite genre, but that’s not to say that it won’t someday. The game still has room to grow as runs are relatively short and linear, and there is currently only one playable character to my knowledge. However, with all of that being said, Voidigo already feels like a really fun game that is both familiar enough to make me feel comfortable but unique enough to stand out from other, similar titles. If you enjoyed Nuclear Throne or Enter the Gungeon or even Monster Hunter, then I recommend checking out Voidigo.

** A Steam code for the game was provided by the publisher **

Aliens: Fireteam Elite – Pathogen Review – Brief Bughunt
Next Diablo 2: Resurrected Is Just as You Remember It
Previous Revita is Tense and Will Harm You in a Special Way