If you’ve ever played an action roleplaying game like Diablo or its many brethren and thought, “this is cool, but I wish it was a little more like Dark Souls,” then Sands of Aura just might be your jam. Sands of Aura is an Early Access title from developer Chashu, and combines standard elements and mechanics from both ARPGs and Soulslikes. That fundamental familiarity is good. though, because while Sands of Aura has a solid tutorial level, there are a lot of things left to players to figure out on their own.

We can have a pretty spirited debate on whether Sands of Aura would be a better or worse game without its Souls-inspired mechanics, which include things like managing stamina, dodging, death and respawns at bonfire-like bells, and of course incremental increases in power and progress as you learn the location and patterns of enemies. While I’m usually a fan of Soulslike mechanics, sometimes — and maybe Sands of Aura is one of those times — games have enough character not to need them.

Happily, Sands of Aura is not procedurally generated, but instead a beautifully crafted open world with a lot of player choice built in. The default story line for RPGs — and Sands of Aura is no different — is that you are the hero that can save/unite/cleanse the world of monsters/evil/a scourge. The world in Aura is called Talamhel, a once flourishing land that has been ravaged by a cataclysmic event unleashed by a tormented god, and the literal “sands of time” have turned the landscape into a desert. The game begins with a brief tutorial level, where you learn some of the basics of combat and exploration via tooltips, realize that you’re going to die many times, and eventually make your way to the first boss. Where you probably die many more times. After besting the first boss, the world opens up and you can cross the desert and explore using your hovering sand ship. 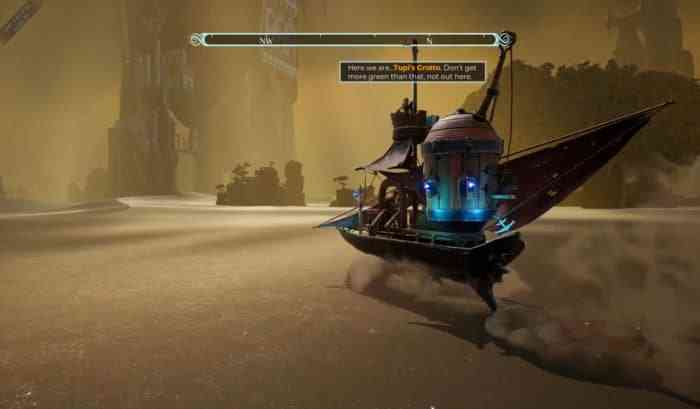 Perhaps Sands of Aura’s most notable feature is its art style, which is slightly stylized but retaining enough detail to be visually engaging. It looks like a colorful diorama, and there’s a lot of variety and style in its landscapes and interiors. It’s obvious that although not much is made explicit, there is a lot of lore and history to uncover. Environmental storytelling is another one of those Soulslike characteristics that Sands of Aura has adopted and it will be interesting to experience the entire game and how all the elements coalesce. The musical score by Eduardo Lopez is evocative and lush, supplementing traditional orchestral textures with a variety of exotic colors.

Any game that acknowledges its debt to From Software’s games will naturally be judged by its combat, and here, Sands of Aura is a mixed success, at least right now in its development. There are a lot of weapons and armor to find, upgrade via runes and craft, though the starting array is a bit limited. The biggest issue with combat is that it’s sluggish and using two-handed weapons for their added damage is an exercise in frustration, as the enemies are nimble and much faster than the player. Add to this the lack of weight behind strikes coupled to a pretty limited ability to dodge (and lack of roll) and you’re left with the challenge of Soulslike combat minus a lot of the mechanics to be a successful combatant. In place of a shield, Sands of Aura uses a magic barrier that is tied to stamina, and it’s also quite difficult to time its uses effectively. Enemies respawn after death, but at least they’re in the same places so you can memorize the dangers and prepare. On the positive side of the ledger, there are potentially a huge number of weapon types that can be crafted, including some fanciful hybrids. While there are no pure magic user classes at the start, all classes or builds use magic infused weapons and special attacks. 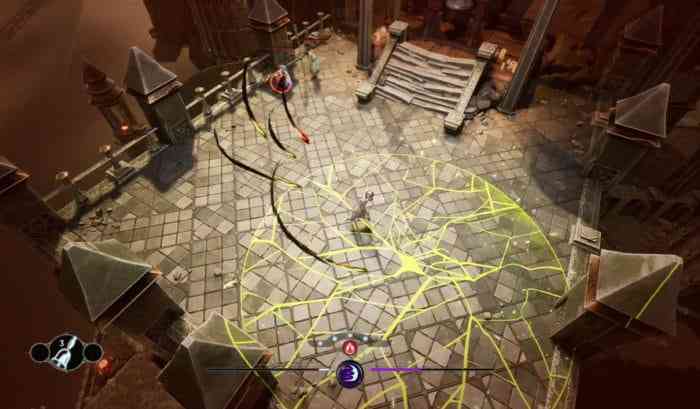 I’m down with Soulslike mechanics when they make sense for a game like Sands of Aura, which for the most part uses them in familiar ways, and to enhance the challenge of combat. What’s in place is very promising. As Sands of Aura moves closer to release, I’m hoping that its combat will be adjusted towards greater fluidity and speed, its camera will become a little more nimble and useful, and all of the game’s mechanics will be made more consistent and clear, especially to player not veterans of Dark Souls. Anyone who is a fan of ARPGs should check out the development of Sands of Aura.

***PC code provided by the developers***

Dolmen, Cosmic Horror ARPG, Arrives on Planet Earth With New Trailer
Next ‘Synthetik 2’ Does One Thing Very Well
Previous Re:Legend is Adorable and Has That Familiar Chibi Charm