Pumpkin Jack is a Solo Developer’s Nightmare Come to Life

At first glance, Pumpkin Jack quickly reminded me of MediEvil, and enticed me to give the PAX Online Demo a go. Despite its perceived influences (the website stating MediEvil meets Jak and Daxter), Pumpkin Jack’s roughly 30-minute demo did enough to sell me on the game as its own, unique property. At its core, the title is a “spooky scary” platforming adventure title, and definitely reminds us of some memorable games of the past.

The player takes on the role of Jack, the Pumpkin Lord tasked by the Devil to undertake a particular task. In the demo, the task given to you is to defeat a wizard for the Devil. Within the demo itself, the story is inconsequential as the demo serves more as an introduction into the world and the gameplay. Though the game’s story of serving the Devil along with its self-identified descriptors of “spooky scary”, the game remains light-hearted in nature which is a welcome decision.

As the genre typically features, Pumpkin Jack’s gameplay loops revolves around exploration, platforming, collecting collectibles, and fighting enemies. The game’s demo is linear, and players must navigate through the level to reach the level’s boss. Within the demo, I was armed with a shovel, and assisted by a crow which acted as both a ranged attack as well as a navigation tool (the crow would knock bridges down). Defeating the demo’s boss also provided another weapon, though the demo cuts off just afterward. Lastly, the game’s Steam page features Jack holding a firearm as another weapon while also referencing “unlockable weapons”. 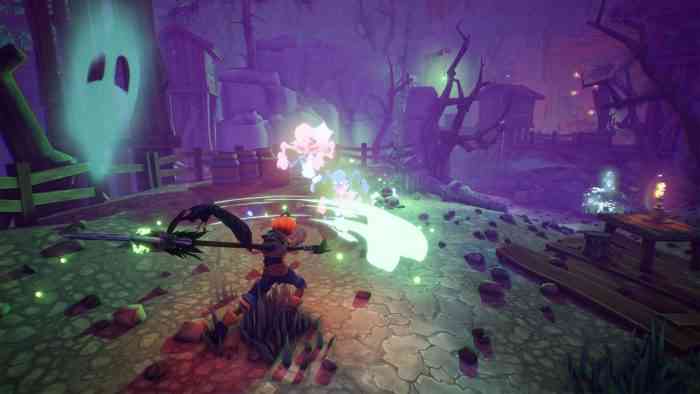 Needless to say, Jack’s arsenal will be well-stocked by the time the game is through. Aside from the combat, the game’s exploration and platforming were relatively standard. Perhaps the best platforming moment of the demo was when I had to flee a burning barn. While the section was not particularly hard, it was still memorable and simply fun. Lastly, it should be noted that there was a death counter that increased in the center of the screen upon each death, a nice form of motivation.

Pumpkin Jack is slated to release in Q4 2020 for PC and consoles, and we look forward to experiencing the full game.

Spooky Indie Pumpkin Jack Gets a Devilish New Trailer
Next Gestalt: Steam and Cinder is Easily The Most Fun I’ve Had During PAX Online 2020
Previous Fight for Freedom From the Ever-Changing Palace in ‘Dandy Ace’