We’ve all played countless action RPGs where the end boss is a hulking giant. It’s terrifying to be a tiny human when the enemy is a towering behemoth. Giants Uprising upends the story, putting the player in the role of an angry and unruly giant. It’s an early access work in progress, but an amusing premise.

You play as Rogbar, a giant, whose race was once respected by humans, but now enslaved. Forced to compete in gladiatorial matches against other giants for sport, Rogbar breaks his shackles and escapes. Rogbar adventures across the vaguely medieval landscape, fighting armies of humans and occasionally, other giants. He lays waste to renaissance faires, destroys forts, topples towers and generally creates the kind of havoc expected of an unruly giant.

Rogbar’s weapons are simple, but most of his power comes through his fists and feet. He kicks, stomps, punches and dashes. Rogbar’s moves are a bit simple, and control is sluggish, but after all, you are controlling a giant. Against others of your size, matches often devolve into patterns of block, hit and retreat, rinse and repeat. If you come to Giants Uprising expecting precise action combat, you might be disappointed. Giants do don’t nuance very well. Unfortunately, the game starts with a giant versus giant match. It’s not a good first impression. 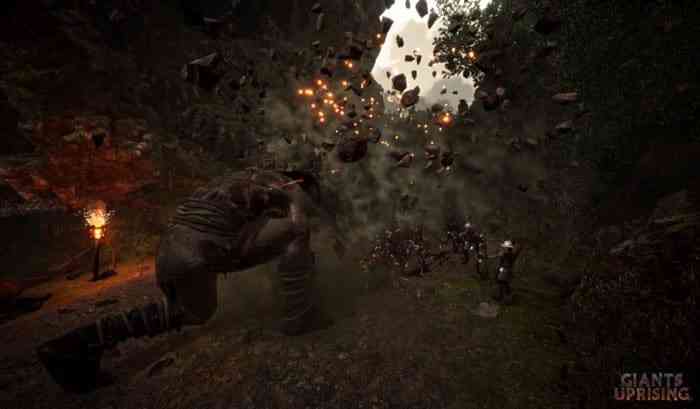 Most of the time, Rogbar and his human ally Kielbasa are attacking human settlements. Giants Uprising does a pretty good job of reminding us of scale. Giants are huge, and humans are very small. They can be annoying and even deadly in large numbers, however. The armies poke with their spears and swords, and sting with their tiny arrows. Destroying towers, walls and other buildings restores Rogbar’s health bar, as does laying waste to swaths of humans. The humans have quite a number of offensive weapons and defenses, including huge traps, ballista and flaming arrows. Rogbar picks up the odd tree now and then.

While Rogbar expresses himself through grunts and cries, Kielbasa serves as the narrator as he guides his giant companion forward. There is a bit of humor, both in Kielbasa’s dialogue and in the voiced-over story scenes. There is also a great deal of good old Anglo-Saxon cursing. 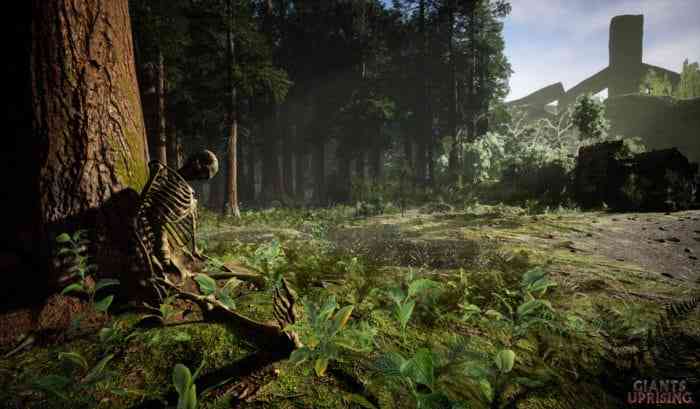 The Heart of Darkness

Graphically, Giants Uprising isn’t pushing any limits. In fact, it looks dated. It’s also often a very dark and occasionally muddy game. That said, the visuals catch the mood of story, Static panels between quests move the tale forward. The enslavement of the once wise giants is probably some sort of metaphor or something.

Since this game is still in the earliest of access, there is time to make some giant strides towards improvement. A character creator would be nice, so we could play as our own idea of Rogbar. A little more variety in combat would be welcome, too. Most important, the sluggish controls need to be fine tuned. 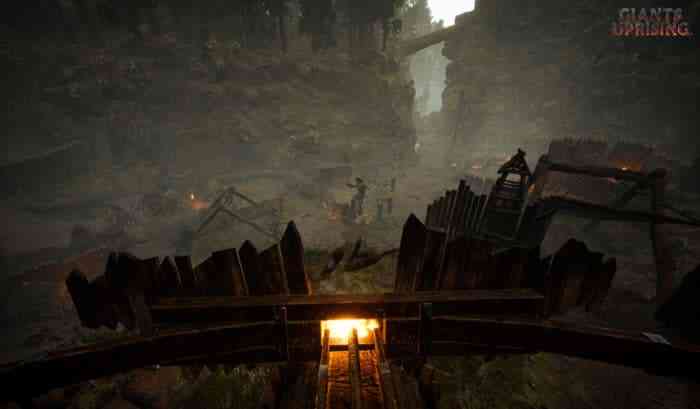 Keeping in mind that there is a lot of content yet to come, Giants Uprising feels like an interesting premise but a pretty rough game. Current state aside, I like that the team is going for different. There are far too many games about human heroes fighting giants. There’s a bit of welcome pathos about a big galoot stomping and grunting his way across the countryside. I look forward to seeing where this one ends up.