It’s a Whatchacallit You Play on a Kajigger

When I first heard about Futurama: Worlds of Tomorrow, I wondered if it would be anything more than a mobile cash grab with the ‘Futurama’ name stamped on it. After a hands-on preview at the official launch party, here’s what I discovered.

Futurama: Worlds of Tomorrow offers a top-down isometric view of New New York. Whether it’s iOS or Android, players can navigate the city via touch-screen. Fanfare is present and immediate. Developer TinyCo has replicated Futurama’s setting and placed it in the palm of your hand. To make things better, the show’s characters are constantly present within the city limits, minding their own business, going about their worthless lives. Characters like Fry, Kiff, Amy Wong, Scruff—you name ’em—are present. And if you think someone’s missing, developers said that work is being done to give every single character in the history of Futurama their own screen time, so to speak.

As for how the game plays, Worlds of Tomorrow’s progression system is like that of a traditional RPG. Quests can be found throughout the navigable map, given to you by one of many major characters casually strolling about the owl-infested streets. However, the game follows a semi-linear system where completing quests unlocks quests from other characters, and completing a related series of quests unlocks a new location. 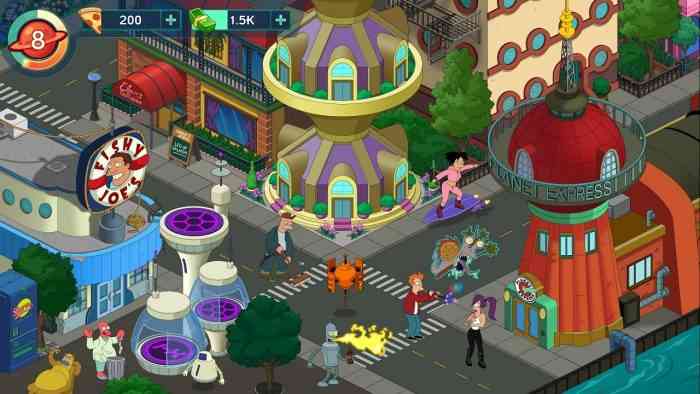 Furthermore, the game has an original plot. The landscape of New New York has ruptured thanks to the Hypnotoad mating season… and because Futurama. Therefore, many of the characters have been scattered and certain parts of the city are unreachable. One example is Hermes and the Central Bureaucracy Building.

In order to free Hermes and unlock the location within New New York, I had to complete one of the aforementioned string of quests. One quest involved returning a set of gloves to Kiff, the inept alien/former subordinate to Zapp Brannigan. The quest was handed down by Amy Wong and required going to the moon. In order to get to the Moon, I had to launch with my crew on the Planet Express Ship.  This is when I discovered the next game feature: Party sorties.

Futurama: Worlds of Tomorrow has party sorties. I could choose up to four characters to take into space; of those available were Fry, Leela, Bender, Calculon, Hedonism Bot, Scruffy, and the list goes on, with some characters accessible later down the line. Just so happens, each character has their own unique abilities (will get into that later). 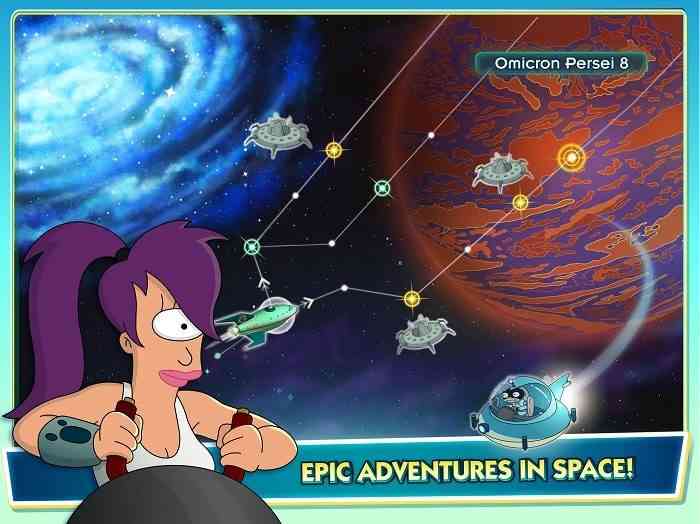 Going into space revealed the galactic exploration map. There are space travel routes that offer varied rewards along the way: in-game currency, premium currency, and XP.  Different paths can lead to different planets (there are several in Worlds of Tomorrow), but my available option was the moon. But in order to reach the moon, I had to murder some aliens. After choosing my path, aliens along the route attacked and so I had to march into battle with my hand-selected cast of characters.

To make Worlds of Tomorrow a true homage to gaming, every member of the Planet Express crew enters into battle as a pixel of themselves. What followed was a retro-style rumble between two sides where characters tossed random crap at one another. In this particular battle, the enemies were Generic aliens from the show. 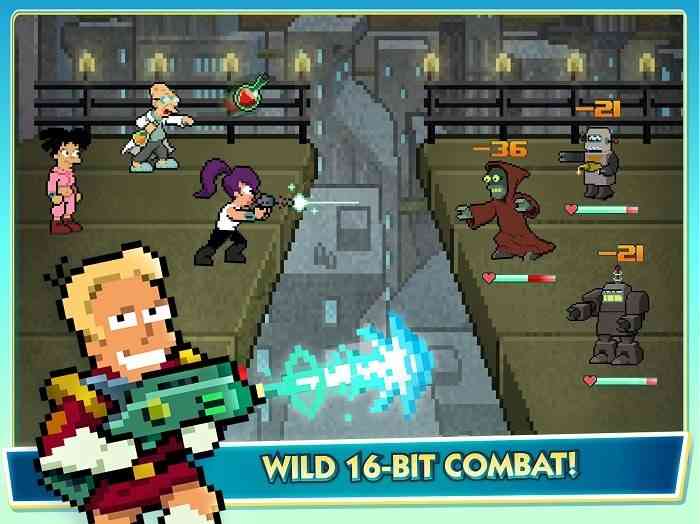 Combat is automated but fast-paced and engaging. If you tap your character before a projectile lands, they dodge; if you tap an enemy, you earn a critical hit. On top of that, each character had a meter that, when filled, could be tapped to launch a special ability. In fry’s case, it was a gigantic pizza. Something else I did not expect was classic RPG roles. Apparently, Scruffy the janitor can heal the other members of your party. Useful.

Once the battle was done, I gained rewards in the form of XP and sweet cash. To make it better, party members can level up and unlock new outfits. Many of the outfits in the game are also from the show (more fanfare). But, developers have also included original outfits. This is how you customize your characters. If you want bender to wear a sombrero or be swagged out in gold plating, go nuts. If you decide to play Amy in her revealing “night-life” outfit, no one is going to judge you. 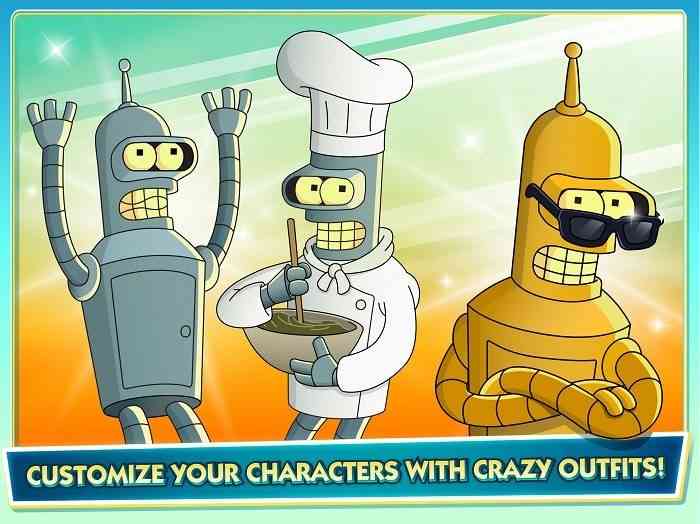 Once I reached the moon, the quest was almost done. Text dialogue pops up and, depending on which character is speaking on behalf of your crew, a number of dialogue options show up. Since Bender was speaking on behalf of the crew, I had the option to be a complete douche. However, one unique dialogue choice was locked because it required Leela to be the speaker. It involved shooting the Moon Mascot with a laser and taking the quest reward without fail. Unique dialogue options are initially locked unless the right member of your crew is speaking

Afterward, I returned to the warped New New York to turn in Kiff’s quest to Amy Wong. After finding Kiff on the streets, a dialogue exchange between him and Amy followed. Again, it was purely textual; thankfully, it carried dialogue that was completely Futurama. You’d think the original writers had a hand it the dialogue. And as far as I know, they did. 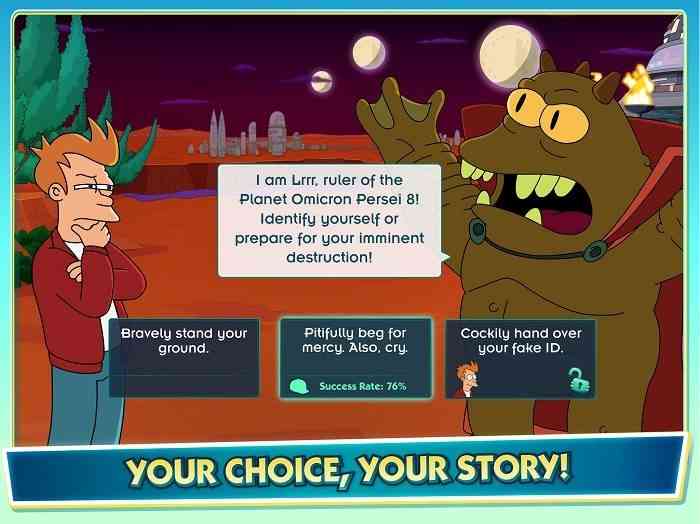 Rough Draft Studios has been overseeing development for Futurama: Worlds of Tomorrow and approving most of what makes its way into the final product, especially the animations. Everything about the look and dialogue is spot-on. Futurama is alive and well in this mobile game. Once I finished Kiff’s quest, I found more available from wandering characters. Completing more would eventually lead to unlocking the Central Bureaucracy Building and Hermes as a playable character… I presume.

When it comes to mobile games (and other games) inspired by different mediums, many devs and publishers will take liberties with the source material. While some games succeed, some titles completely fail at recapturing the magic. Thankfully, Futurama: Worlds of Tomorrow, without a doubt, feels like an extension of the animated series. Everything stays true to the show; the humor, the animation, the ridiculousness is all there. This makes what I’m about to say even better.

According to producer and lead writer David X. Cohen, the plan is to keep the mobile game going for the foreseeable future. It shall be extended with new, episodic twists, content, and voiceover dialogue. And this corroborates what the developers of TinyCo have told me; without details, they mentioned plans to expand the content of Futurama: Worlds of Tomorrow. At least, this is what Cohen plans until Futurama, the show, is revived. Appreciably, Futurama: Worlds of Tomorrow is free and fully playable/accessible without spending money on premium Pizza currency. But, like your typical mobile game, premium currency does expedite access to much of the content. However, pizza is another currency available to players via missions. Besides, if you just need to be near Futurama, this game will scratch that itch. 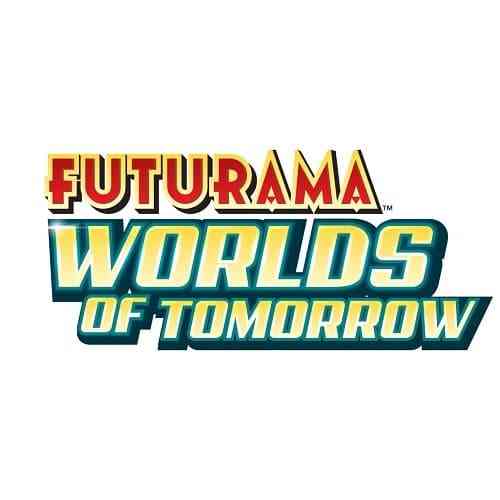 Square Enix Reveals Some New Nier Reincarnation Gameplay
Next Fable Fortune Preview – Hearthstone Gets a Facelift
Previous State of Decay 2 Preview – A True Sequel to the First, Now with Coop