Gunpowder and Magic Help Flintlock: The Siege of Dawn Stand Out

Flintlock: The Siege of Dawn Preview

The tsunami of Soulslikes continues unabated, but the most recent wave seems to be favoring creative reworkings of familiar Soulsborne mechanics. Thymesia just released, Steerising is just around the corner, and sometime in the near future we’ll have Lies of P and Flintlock: The Siege of Dawn. Interestingly, all three of these games bid farewell to high fantasy tropes. Instead, they’re all set in some version of the European 19th century. Bloodborne got there first, of course, riding in on a Lovecraft-inspired steed.

A while back I had the chance to watch some hands-off gameplay of Flintlock. It’s shaping up to be much more than a Dark Souls wannabe.

Close the Gates of Hell

in A44’s Flintlock: The Siege of Dawn you play as Nor Vanek, a warrior who’s part of a force trying to seal the door to the afterlife. Monsters and demons are pouring through, and they must be halted. You have a companion named Enki, a magical creature that helps Nor in combat. Nor is a capable fighter, but Enki is a valuable ally in boss fights. 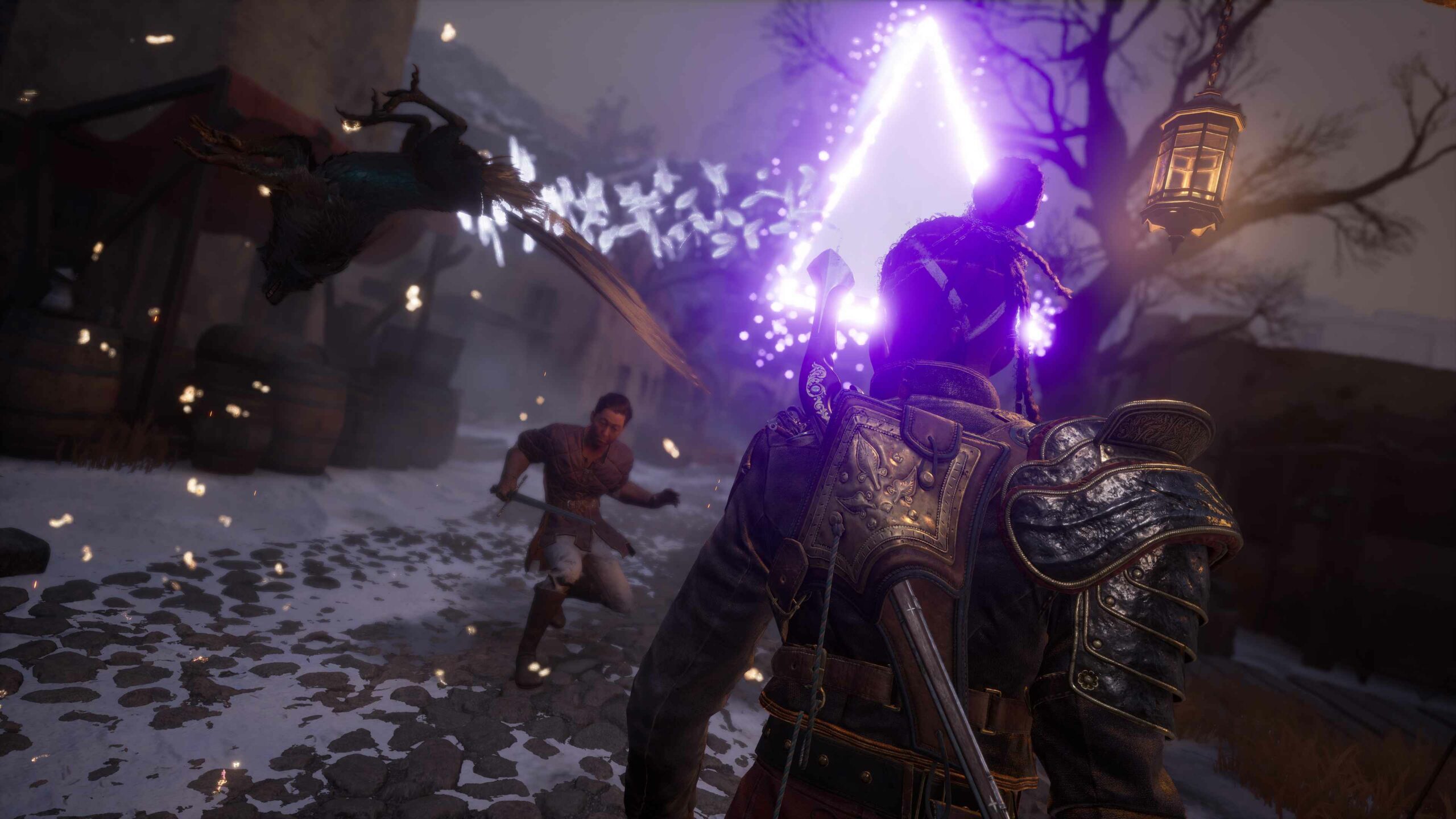 There’s no character creator in Flintlock, as the narrative is about Nor and her journey. That’s not to say players can’t shape their own version of Nor. As in most action-RPGs, there are weapons and armors to collect and upgrade. Probably the most unique aspect of Flintlock — aside from its setting — is the way Nor and Enki synergize. Nor is a master of black powder weapons and axes. Enki uses powerful magic. The player can move effortlessly between them.

Sittin’ in the Coffee Shop

Although we only saw a very small slice of the game, Flintlock’s art design and graphics were impressive. Overall, the landscape and architecture suggest northern Africa and the middle east in sort of the 19th-century colonial period. That’s a simplification, of course, because the game has its own lore and look. The streets had a dusty, lived-in look, with an obvious distinction between areas.

The legacy of FromSoftware’s design principles and mechanics are baked into Flintlock as well. There’s a hub world in the form of a movable caravan, with an array of NPCs and vendors. Killing enemies allows you to steal their life force — one might even say steal their souls — as currency. When you die, you lose your souls and enemies naturally respawn. Nor can fast travel. Not from bonfires, but from strategically located coffee shops. Nothing like stopping for a latte and a re-spec. 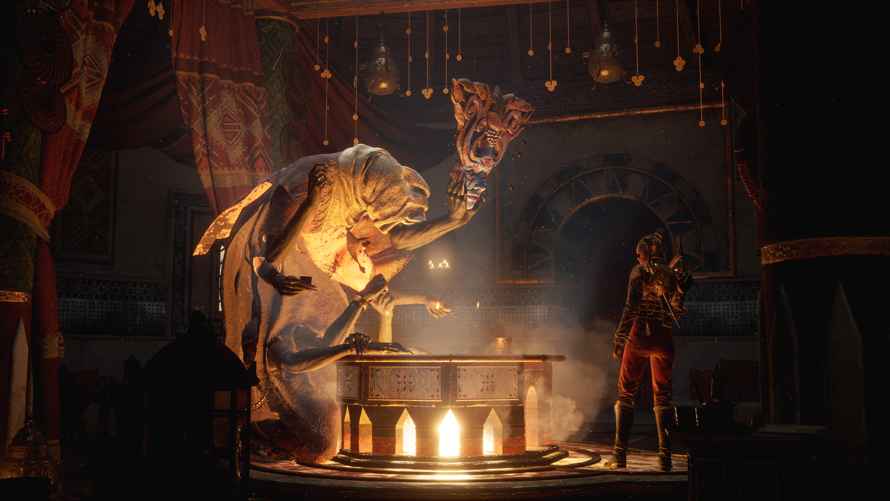 Moment to moment, combat looked very Soulslike, but exceptionally fluid and acrobatic. The addition of Enki’s magic abilities to Nor’s weapons makes for encounters with a lot of depth and creativity. A wild-looking boss encounter had Enki using magic to stun the enemy so Nor could use a graceful leaping attack with her axe, before using a shotgun to do extra damage.

Leading to the boss was a series of fights with single enemies and small groups that looked very Soulslike. Like Bloodborne, Sekiro and the recent Thymesia, the emphasis seemed to be on offensive moves instead of blocking and parries. Nor also used a range of consumables and potions, both to heal and against the monsters she fought. 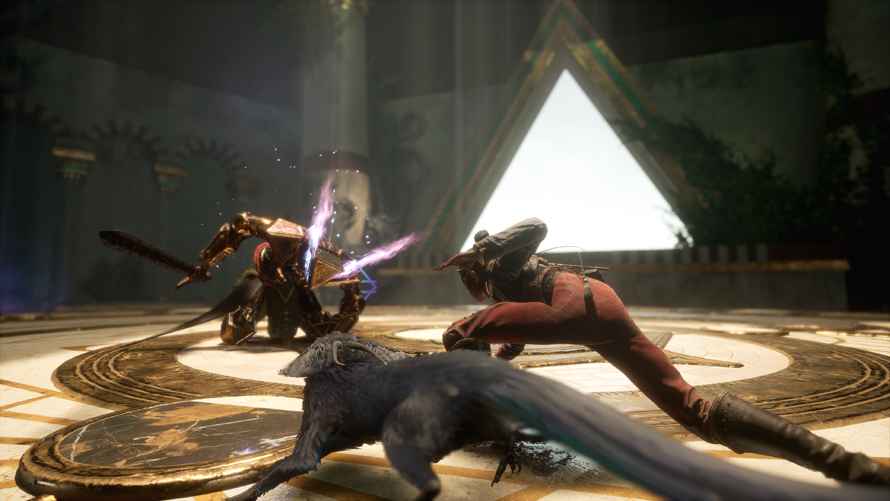 From the limited gameplay the developers showed off, a couple of things became clear. Flintlock: The Siege of Dawn is thoroughly infused with Soulsborne mechanics. For me, at least, that’s not a negative at all. Soulslike action games are my go-to genre. The other aspect the demo clarified was that Flintlock looks spectacular and the combat stands out for its fluid moves and combinations of weapon types. Flintlock: The Siege of Dawn will be released in early 2023 and I can’t wait to check out the game. 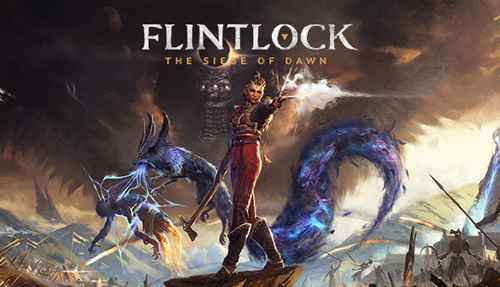