In Distant Kingdoms you are building a series of interconnected towns. It’s one of those games, and anyone familiar with the city-building genre will feel pretty much right at home. The game mechanics follow a similar formula. Houses generate income through taxing residents. You will also put up production buildings to create simple supply chains which will offer your citizens gainful employment. Fancier citizens have more particular wants, and soon you will evolve from berry picking and bread making to cake baking and brewing. So far, pretty familiar right?

I spend a lot of time on these sorts of city maker games. They kind of feel like cultivating a big weird garden. You try to keep all the gears of industry turning and you are rewarded with a great piece of improvised urban art. The thing is, you do hit a threshold where the similarity between these games starts creating cracks in the illusion. Why do you need tools to mine for gold, but not coal? Other than to fulfill the progression tree in a balanced way? Questions like that can slowly chip away at your suspension of disbelief until you are seeing right through the charming graphic veneer into the underlying spreadsheets.

Fortunately, there’s an antidote for that grind, and Distant Kingdoms has it in spades: charm. It’s as simple as that. The production trees and politics in a series like Tropico are pretty rudimentary, but you keep coming back to enjoy the dystopian Caribbean paradise themes. Distant Kingdoms takes place in more of a stock fantasy world, but there’s enough in the way of specific surprises to keep the world feeling fresh. 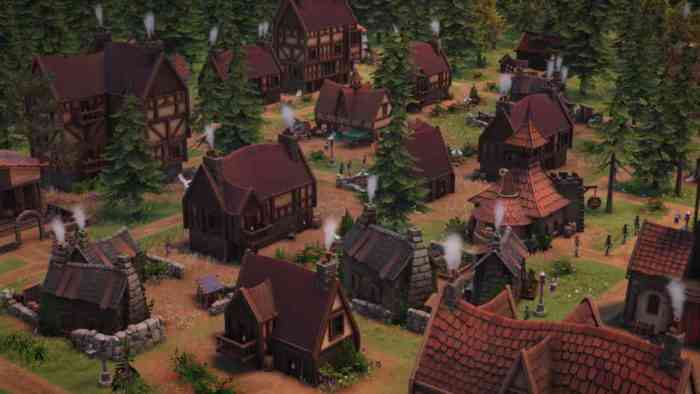 There are four fantasy races that can live in your kingdom, and they are as standard as these things get. You’ve got your humans, dwarves, elves, and orcs. But each of these groups has their own fun demographic flavor that sets the tone for the game. Years of Tolkien and Elder Scrolls have gotten me to picture orcs as short tempered brutes, but these orcs are pretty chill. They tend to like whiskey more than beer, and they have literal and figurative green thumbs.
Different species have different preferences and work differently. Anyone can work in a mine, but the mine will be that much more effective if there is a dwarf in there. You aren’t overly burdened with micromanagement in these situations, but the town is pretty good at figuring these sorts of things out.

Overall, Distant Kingdoms gets high marks for style. The buildings are attractive in a throwback-y Warcraft kind of way. The writing for the adventure sequences is light and funny, without the sort of try-hard jokes you sometimes get in lighthearted video game fantasy. And watching the city come together is very satisfying; there are a good number of cosmetic items of many sizes and shapes. Fitting them into blank spots on the grid has a good feel to it. 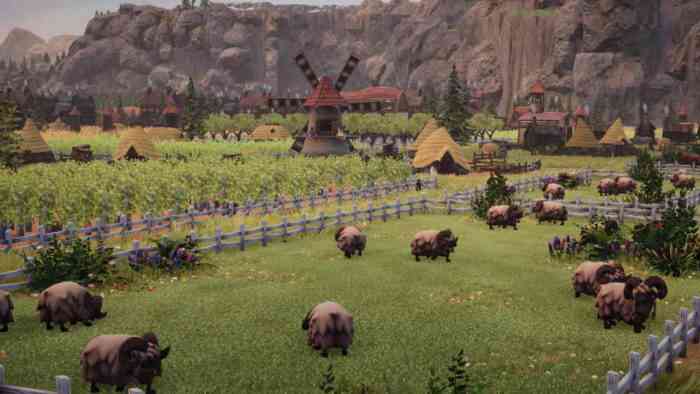 Your progress in Distant Kingdoms is guided by a tech tree. This is communicated with you through mission objectives, which always insinuate your next step. I like features that keep your progress moving, but I worry that Distant Kingdoms isn’t as great at communicating as it thinks. I played the thoroughly exhaustive tutorial and was told a lot of stuff… but retained very little of it. Not a dealbreaker; as I’ve insisted, we’re talking about pretty formulaic gameplay. But despite reading many words about the economics screen, I found myself struggling to find relevant information. Do my citizens not have enough eggs to eat, is that why they are so sad? Or is it something else? Sometimes you will encounter a dilemma with no obvious solution.

The challenge is high enough that I found myself restarting a couple of times. That could be construed as a compliment, but often these failure cascades happened because of something that could have been easily communicated. One time, I simply expanded too fast and couldn’t build enough houses to keep up with the cost of my expanding industry. Another time, I tried building a secondary village around a gold mine, only to watch it mysteriously stagnate and collapse, tanking my whole kingdom. Challenge is good! Trial and error can be fun! But for a game that wants to do a lot of hand holding, I frequently found myself lacking the information I needed.

Arriving Precisely When You Mean To

Here’s where I should mention that Distant Kingdoms is still in early access, and there is infinite possibility as to where the game is going. I know adding a fishing industry is coming soon. I also feel like the adventuring mechanic is a little isolated- your party will scout out new lands, but do little else, and that feels like a huge opportunity. Really, the sky is the limit on Distant Kingdoms. 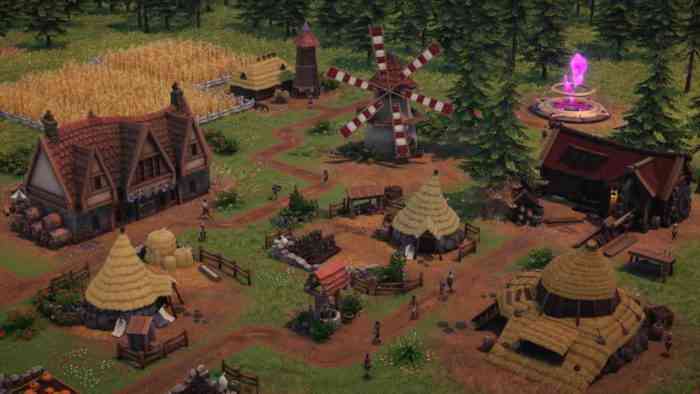 If the game shipped looking like it does, I would tell you that Distant Kingdoms is a charming if somewhat slight city builder. There isn’t enough in the way of unique mechanics to set my world on fire. But it’s so bright and nice looking, and charming that I don’t want the experience to end. I want to play a robust full version of this game, the kind that will probably take years and years to continue to develop. Well, I am rooting for Orthrus Studios to succeed. That’s the kingdom I would like to live in.

PAX West 2016: The Metronomicon – Dancing Your Way To Victory
Next The Dark Pictures Anthology: House of Ashes Will Be the Series’ Best
Previous Dungeons of Edera Preview – Meet Looty McLootson