Strategy games seem to be an especially difficult genre for developers, and it’s easy to see why. The desire to make a game exciting while also providing the player with the ability to take a moment to plan their actions can often seem to be goals at odds with one another. While some actions can be taken in reworking traditional mechanics to generate excitement, it’s usually in the aesthetics that we find a majority of the uniqueness in games like Warhammer 40,000: Mechanicus.

It should be said that the concept of Warhammer 40,000: Mechanicus is fine. You have two opposing groups who, whether intentionally or unintentionally, seemingly represent different takes on transhumanism (the heroes of our story are combinations of man and machine whereas their alien foes have opted for a more complete mechanical overhaul). The gameplay consists largely of exploring tombs on an alien planet with plenty of combat interspersed therein. It sounds like a pretty interesting premise. Unfortunately, the premise is nowhere near as important as the execution, and that’s where Mechanicus falters.

The combat of the game is fine, if a bit uninteresting (especially at first). There’s a neat cognition mechanic that interacts with abilities in a series of ways that encourage slightly more aggressive gameplay, but it’s nothing revolutionary. The issue I have with the game is largely how the aesthetics are handled. As I mentioned before, aesthetics are crucial for distinguishing Mechanicus not only from other turn-based strategy games, but even from the hordes of other Warhammer 40,000 games (there have already been two others released this year). 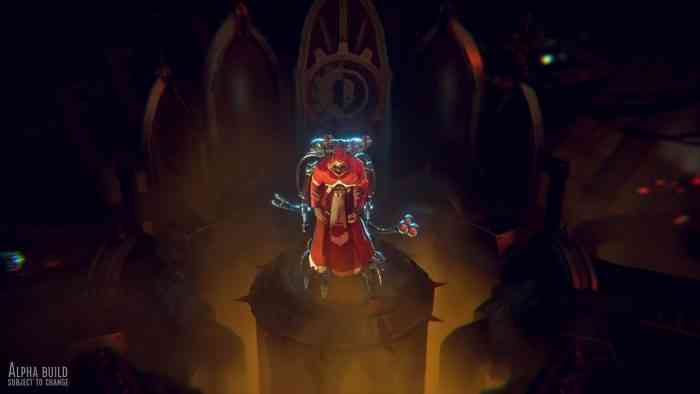 Mechanicus falls into the same trap as many other sci-fi games: unrelenting grit. The game refuses to give the player a break from the gritty dystopian tone. The characters are all perfectly designed to be hideous and angry, but they are remarkably difficult to tell apart as a result. Everyone seems to have an unnecessarily long name and at LEAST one eye replaced or covered by something mechanical. Honestly, I don’t think I saw even one character in the game who had two organic eyes on display. In a sort of ironic symbolism, this serves well to demonstrate the game’s greatest problem: it has no personality.

Games like Shadowrun take place in a loosely similar dystopian setting, but there is a charm that comes from the personality and depth in the characters and circumstances. There are twists and turns that give the games personality and make them more than overviews of the misery of dystopian life. Warhammer 40,000: Mechanicus gets a little wrapped up in itself. It reminds me of how some horror games are so reluctant to give the player a break from the scares that the player eventually goes numb to the horror. Everything is a bit samey throughout the story. My point in all this is that, basically, if you’re looking for something fresh and new, you’re probably not going to find it here.

The game comes out in a month. That gives them time to fix bugs and other technical glitches, so I won’t worry too much about polish in that sense. The combat is fine, with some minor differences from previous games in the series. The aesthetics leave a lot to be desired, and the writing does very little to help with that. The story itself isn’t bad. The actual plot is actually kind of interesting, but the way it’s told as of now is very one-dimensional and leaves the quality of the overarching narrative neglected in favor of discussion of the gritty 41st millennium mumbo jumbo. The short of it is this: the game plays fine, but don’t go into it expecting a captivating experience.